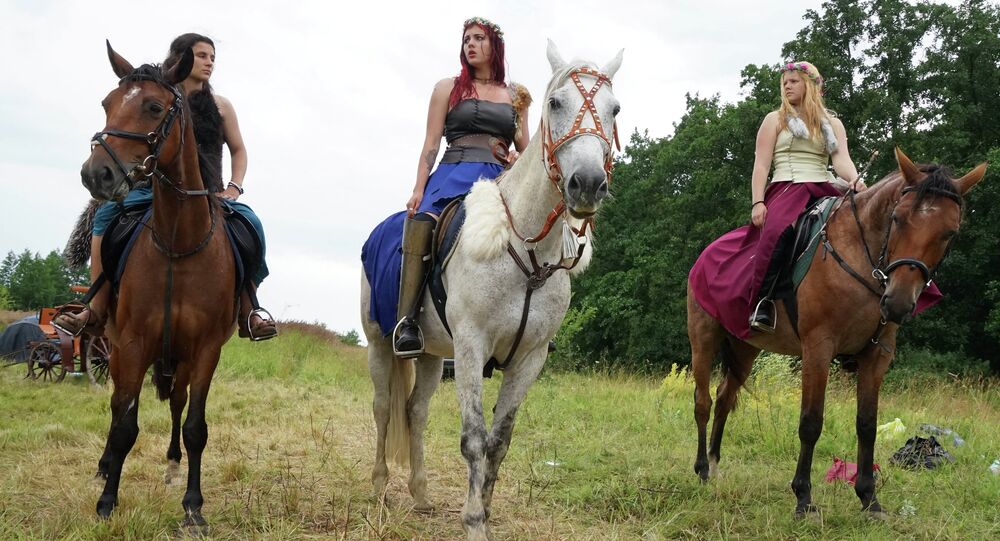 A 9th-century Viking women, buried with many weapons, has triggered scientific speculations about whether Viking women were more warlike than previously thought.

A new Viking exhibition at Oslo's Historical Museum, set to open on 5 April, boasts a well-preserved female skeleton allegedly belonging to a Viking warrior. The skeleton has never appeared before the public and is accompanied with spears, swords and axes found in her grave, broadcaster NRK reported.

According to archaeologist Hanne Lovise Aannestad, who worked with the exhibition, the find uncorks a debate about the position of women in the Viking age and especially their use of arms.

"The fact that she was buried with weapons was what made this find stand out," the archaeologist mused.

According to Aannestad, the modern interpretation of historic gender roles is still dominated by notions of how the things were in 1950s.

"The time is ripe to interpret the gender roles in a new way. There are many sagas describing strong female figures, but weapons are not mentioned," she stressed.

In 2017, bones excavated from the Swedish town of Birka, one of the most important trading centres of the Viking era, triggered a similar discussion on the role of women, as DNA analysis and osteology revealed that a powerful chieftain buried with arms and horses was in fact a woman.

To debunk another myth, the exhibition features the world's best-preserved Viking helmet.

"It is a famous one", Aannestad said, adding smilingly that it doesn't have any horns. This is a deeply-rooted myth, while the real findings look pretty ordinary.

The Viking helmet was found at Gjermundbu farm in Buskerud, and the tomb also contained swords, spears, axes, shields and riding equipment. The man buried there allegedly belonged to the riding warrior elite.

​During the Viking age that stretched from the late 790s to the mid-1060s, Scandinavian Norsemen explored large swaths of Europe for trade, raids and conquest. Their exploits ranged from Greenland and Newfoundland in the West to the Byzantine Empire (modern-day Greece and Turkey) in the East.