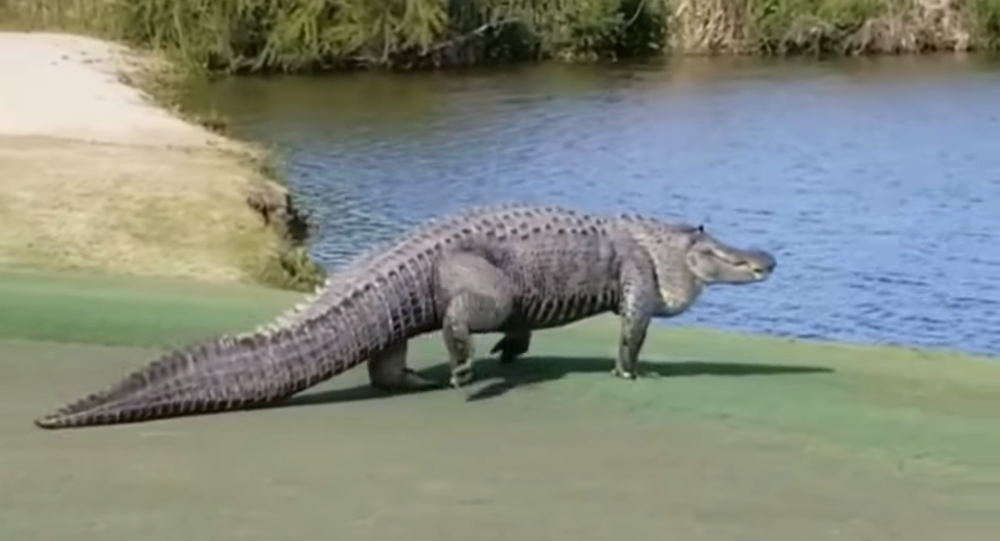 How do you play golf with a huge alligator lying right next to the hole?

A massive alligator, estimated to be nine foot (almost 3 meters) long, has made an appearance at a golf club in Georgia, while a group of golfers were still on the spot.

The large animal walked some 20 feet from the water, before it decided to take rest mere feet away from a golf hole, New York Post report says.

The surprise incident happened at The Club at Savannah Harbor on Sunday, The Guardian report says.

"We see them all the time out there but nothing like that," Ed Vance, the man, who shot the video, said in an interview. "It was bigger than any I ever saw and it was unique having it so close to us. It wasn't intimidating; it was just surreal. I was in awe of the size of him."

"The video doesn't pick it up, […] the ‘thud, thud, thud' sound was what you would think a dinosaur sounds like," he added.

Nobody has been injured during the alligator's visit, but Vance admitted the animal's presence was unnerving.

"It was kind of hard to concentrate," he said. "My next shot wasn't very good."

Fighting to the Death: Alligator Attempts to Eat Huge Python in Florida (VIDEO)

Who Doesn't Like a Bit of TLC? Albino Alligator Loves to be Petted

Hello There! Giant Alligator Makes an Unexpected Visit to a Florida Yard