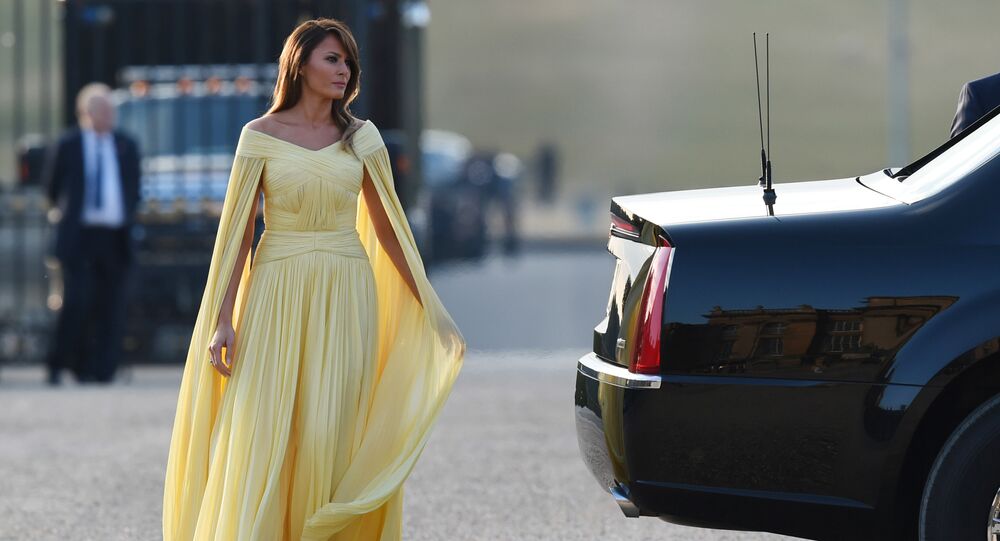 This is not the first time that this quote has been falsely attributed to the American luxury fashion designer: back in 2016, a Twitter user posted a doctored Daily Mail headline with the same claim.

Designer-cum-Hollywood director Tom Ford is trending on Twitter for an incendiary comment he never made about US First Lady Melania Trump:

“Who likes Tom Ford? Tom Ford refuses to dress Melania Trump: ‘I have no interest in dressing a glorified escort who steals speeches and has bad taste in men’”, a now-deleted tweet by user @fras99 read.

Upon learning that the demeaning quote went viral and was perceived as a real comment by Ford, the American designer’s spokesperson felt compelled to denounce the claim as fictitious.

In reference to a fictitious statement attributed to Mr. Ford regarding First Lady Melania Trump: “This is an absolutely fabricated and completely fake quote that somehow went viral. Mr. Ford did not make this statement; it is completely false." — Tom Ford Spokeswoman

According to Women’s Wear Daily (WWD), Ford debunked the quote himself, stressing that “never, ever, ever” has he said that Melania was an escort.

“I dressed Michelle Obama once and once only when she was in England for a white-tie dinner party with the Queen and I was living on London, that was different. That’s all I said. I’ve never said anything derogatory about Melania. I never would say anything derogatory. It’s so weird, isn’t it, in today’s world the way someone out of nowhere can just make up a random quote and start circulating it on the internet?” Ford told WWD.

Still, Twitter had a field day with the made-up quote, with many, including rapper 50 Cent, apparently sharing the feeling:

Me just finding out why Tom Ford is trending (and liking it): pic.twitter.com/CkAL8ltwiL

Heading over to get some Tom Ford even tho I can’t afford it 🤣 pic.twitter.com/tUPohpM0sU

I don’t know who Tom Ford is,but I wanna buy him a beer

Sorry, kids. My apologies. The state of things is such that I believed #TomFord said this, and I agree, btw.https://t.co/CJAnQs9BK2

Once the fabricated quote broke Twitter, some Trump supporters decided to boycott the Tom Ford brand – something which was also widely mocked on the web:

How can you boycott Tom Ford if you can’t even afford it pic.twitter.com/6VTQ8Qs5YS

As for real comments that Tom Ford has made about FLOTUS, just weeks after the 2016 election, the fashion designer told “The View” that he had refused to dress her years before that and said she’s “not necessarily my image”.

“Even had Hillary won, she shouldn’t be wearing my clothes. They’re too expensive. I don’t mean that in a bad way: they’re not artificially expensive, it’s how much it costs to make these things. I think the first lady has to relate to everybody”, Ford said at the time.

In January 2017, Ford clarified his statements, which were perceived as anti-Trump on social media, to ELLE.com on the Golden Globes red carpet:

“Given this president’s beliefs about ‘made in America’ – I think the clothes they wear should be made in America. I think that whoever is the President, or the First Lady, should be wearing clothes at a price point that are accessible to most Americans, and wearing clothes made in America. My clothes are made in Italy, they’re very, very expensive. I don’t think most women or men in our country can relate to that, and I think the First Lady or the President should represent all people”.

Several days later, Women’s Wear Daily cited a source who attended the Leadership Luncheon at Trump International Hotel in Washington, DC, as claiming that the newly-minted POTUS began discussing designers who had refused to dress Melania.

“Tom Ford came out and said he was not dressing Melania. He was never asked. I never liked him or his designs. He’s never had something to dress like that [pointing to his wife, who was in the room at the time”, Trump said, according to the insider.

Ford was linked to the “glorified escort” claim shortly after the 2016 presidential election when Twitter User @AlexisDiMonroe published a doctored Daily Mail headline with the same statement.

"I have no interest in dressing a glorified #escort who steals #speeches and has bad taste in men" — Tom Ford #MegaShade #Ammunition 😂😂😂😂😂 pic.twitter.com/LhwYHZ8KWy