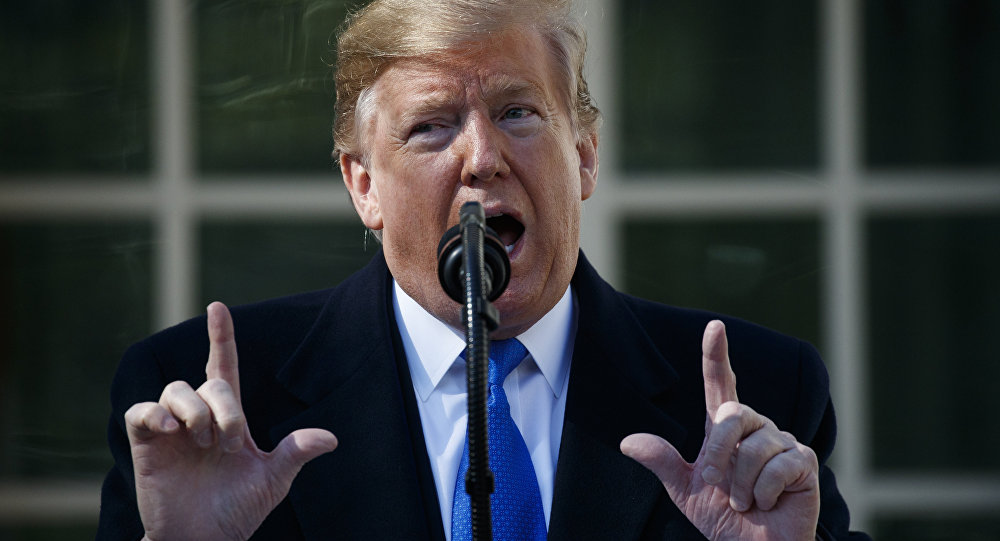 Earlier, Meghan McCain accused US President Donald Trump of "obsessing" over her dead father after the president went after the late Arizona Senator for his alleged role in leaking the 'Russian collusion' Steele dossier.

Trump again went after John McCain on Twitter for a second day on Sunday, citing court papers purportedly showing that the never-Trump Republican senator had a bigger than previously thought role spreading the since-discredited Steele dossier to US intelligence services and the media.

"So it was indeed (just proven in court papers) 'last in his class' (Annapolis) John McCain that sent the Fake Dossier to the FBI and Media hoping to have it printed BEFORE the Election," Trump wrote.

"He & the Dems, working together, failed (as usual). Even the Fake News refused this garbage!" he added.

Trump's remarks were his second attack against the late Senator — who died of cancer-related complications last year — in less than 24 hours, with Trump earlier accusing McCain of multiple "stains" on his record, including "spreading the fake and totally discredited" Steele dossier and his "thumbs down on [the] repeal and replace" healthcare bill in the Senate.

Spreading the fake and totally discredited Dossier “is unfortunately a very dark stain against John McCain.” Ken Starr, Former Independent Counsel. He had far worse “stains” than this, including thumbs down on repeal and replace after years of campaigning to repeal and replace!

Trump's initial reaction to the story prompted McCain's daughter Meghan to respond, with The View co-host telling the president that "no one will ever love you the way they loved my father" and asking him to "maybe spend [your Saturdays] with your family instead of on twitter obsessing over mine?"

No one will ever love you the way they loved my father…. I wish I had been given more Saturday’s with him. Maybe spend yours with your family instead of on twitter obsessing over mine? https://t.co/q7ezwmHiQ4

"I have to tell you. Obama is a decent person & a person you don’t have to be scared of as POTUS,”

This is What Real Leadership Looks like!pic.twitter.com/7AEPq4fX3C

Trump Supporter:"We have a problem in this country, it's called Muslims…when can we get rid of them?"

Trump: "A lot of people are saying that…we're going to be looking at that."

How Christ-like of you to spend your Sunday morning insulting a dead man who served our country.

John McCain was a horribly vindictive and bitter little man.

This will be his legacy.

© AP Photo / Rick Scuteri
John McCain Played Key Role in Spreading Debunked Trump Russiagate Dossier – Report
On Saturday, court filings cited by Fox News alleged that McCain and his associate David Kramer played a key role in spreading the now famously debunked 'Steele Dossier' on Trump's alleged collusion with Russia ahead of the 2016 presidential campaign. McCain reportedly gave the document to a senior FBI counterintelligence agent, while Kramer shared it with journalists from over a dozen media outlets, including CNN, the Washington Post and BuzzFeed, in an attempt to get them to publish it ahead of the election. BuzzFeed published the full 35 pages of the unverified document in January 2017.

The Steele Dossier's accusations, which include salacious claims about Trump's alleged sexual kinks, remain unsubstantiated despite over two years of investigation by US intelligence agencies, Congress and the US media. Trump has repeatedly described the dossier as a "pile of garbage." The document was written by former British spy Christopher Steele after he was contracted by opposition research firm Fusion GPS, with the dossier funded by multiple actors, including the Democratic National Committee and billionaire George Soros.