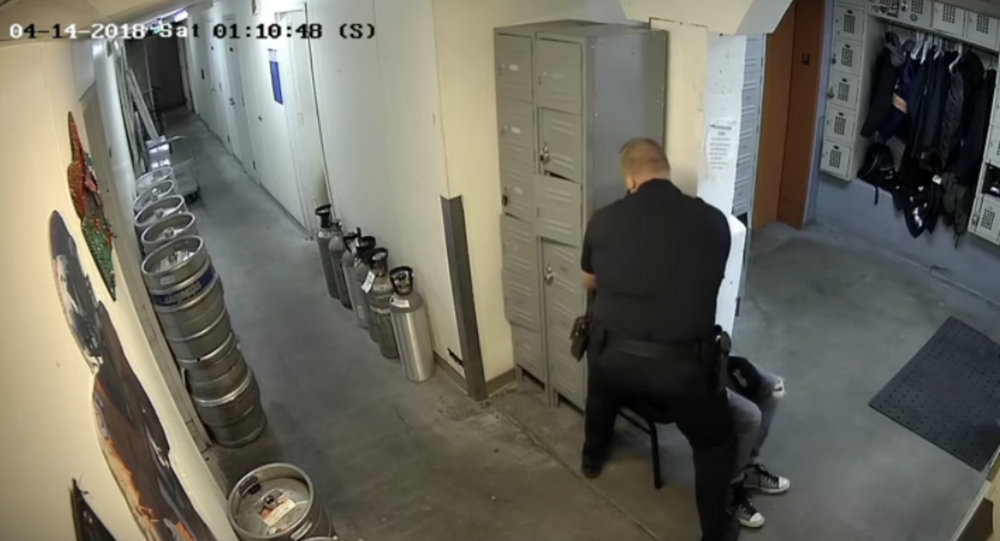 Body camera footage released Friday shows an officer with the Denver Police Department assaulting a handcuffed man who had been detained at a downtown Denver, Colorado, bar in April last year.

The video footage shows Kevin Watson — clearly intoxicated — handcuffed in the basement of Jackson's Hole Bar in Denver. Watson had been detained by Corporal Michael Oestmann, who was off-duty and working security, for partaking in a bar fight.

​​In the video, Watson can be heard taunting Oestmann and repeatedly spitting on the officer's feet while sitting in a chair. When Watson spits on the officer's face, Oestmann punches him in the face and slams his knee into his chest.

"You will not spit on me again! Do you understand me?" Oestmann yells at Watson, who appears to lose consciousness during the assault.

"What's that about being a b***h?" Oestmann adds. "Who's unconscious now?"

The 38-year-old officer was charged in May 2018 with third-degree assault, a misdemeanor, and reached a plea deal with the Denver District Attorney's Office last week; he will not serve any jail time.

Instead, Oestmann received a deferred sentence, and his guilty plea will be reduced from the original assault charge to a misdemeanor menacing charge in one year if he complies with court orders and completes anger management classes.

Oestmann is also still employed by the Denver Police Department, performing desk clerk duties while the department continues its internal investigation of the incident.

On Friday, the department released a statement stating that it "takes use-of-force incidents seriously and has a robust internal investigation process, which includes oversight by the Denver Office of the Independent Monitor and an established disciplinary process when issues rise to that level."

"With the judicial proceedings concluded in Corporal Oestmann's case, we will work to complete our internal investigation into the incident. It would be inappropriate for us to comment further at this time, as the investigation is still ongoing," the statement adds.

Ex-Senior Honduran Police Officer Gets 14 Years in US Jail