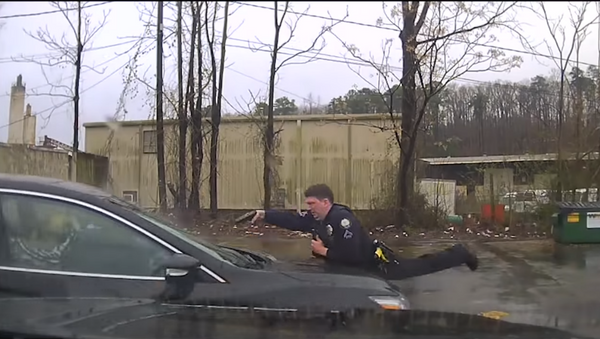 ‘We’ve Ruled Out’ Satan: Flame-Spouting Arkansas Hole Baffles Scientists (VIDEO)
The footage, which captures events that took place between Officer Charles Starks and suspect Bradley Blackshire on the morning of February 22, 2019, includes surveillance recordings from nearby businesses and dashcam video from police patrol vehicles. Blackshire was suspected of driving a stolen Nissan Altima.

Wayne Bewley, the department's interim chief of police, said in statement that the purpose of the release is "to provide transparency to the citizens of Little Rock, and to provide a better understanding of what occured based on the information that we have at this time."

"This is in no way meant to prematurely draw any conclusions to the outcome of the criminal investigation or the separate administrative investigation," he added.

​According to police, Blackshire became a suspect at approximately 11:04 a.m. local time when he drove past a license plate reader, which automatically sent out a notification to a local area detective, who then verified and confirmed that the Nissan Altima was still registered as an active stolen vehicle.

The unidentified detective later reached out to Little Rock police, inquiring if any officers were in the vicinity. After receiving a response from Officer Zebulun Tyler, the pair switched over to an unrecorded police channel, where Starks and additional officers indicated that they would respond to the designated area.

At approximately 11:08 a.m. local time Blackshire is seen on traffic cameras pulling into a nearby business's parking lot. Starks, who parks his patrol car in front of the stolen Nissan Altima, is the first to arrive on the scene.

Immediately upon putting his car in park, Starks jumps out, yelling at Blackshire, who is still sitting inside the Nissan, to show his hands and roll his window down. Video shows Starks repeatedly instructing Blackshire to get out of the car as the suspect questions why he is being targeted by the officer.

Starks was pointing his firearm toward Blackshire from the very beginning of the encounter. At one point in the recording, Blackshire can be heard asking Starks, "I mean, what are you gonna shoot me for?"

After Blackshire indicates that he's not going to exit the vehicle, things quickly escalate, as he attempts to slowly maneuver the car around Starks' patrol car, which immediately prompted the officer to fire a hail of bullets at Blackshire.

Video shows Starks continuing to discharge his firearm even as he winds up lying on the hood of the Nissan Altima. However, he later rolls off onto the ground after responding officer Michael Simpson arrives and drives his car into the Nissan.

The remainder of the recording captures Simpson running over to Starks and later ordering Blackshire to "put your f**king hands up." Once Starks manages to regain his composure, he handcuffs Desaray Clarke, who was sitting in the front passenger seat of the Nissan.

Blackshire was pronounced dead at the scene. Although Starks fired at least 15 shots, Simpson did not appear to discharge his weapon during the altercation.

Starks did not sustain any life-threatening injuries, and was released from the hospital the same day, according to Arkansas Online. Citing police records, the local outlet reported that since 2015, Starks has been reprimanded by officials 10 times, which included a nearly month-long suspension in 2016 "for internal matters."

While he has been stripped of his badge and firearm, pending an investigation, Starks is still employed by the department. Blackshire's funeral was held on Saturday.