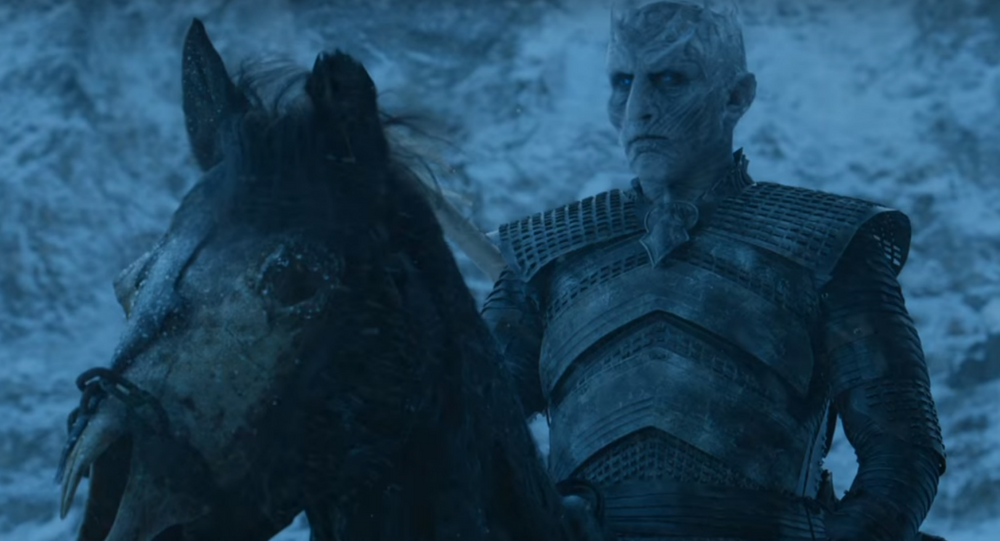 Winter is almost here: HBO has just dropped a mind-blowing 90-second-long Game of Thrones season 8 teaser, which is giving fandom the creeps.

The first full Game of Throne teaser focuses on House Stark and shows Jon Snow, Sansa, and Arya – all making their way through the crypts under their family home in Winterfell.

Then Jon is seen walking past the statue of his biological mother, Lyanna Stark, who says “You have to protect him”. This line is from the season 6 finale, when Lyanna made her brother Ned vow to take care of her and Rhaegar Targaryen’s son – Jon.

“All this horror that has come to my family… it’s all because I couldn’t love a motherless child”, Catelyn’s voiceover is heard in a reference to season 3.

The camera further cuts to Arya, who walks down the hallway, and then shows Jon passing Ned’s statue.

“You are a Stark. You might not have my name, but you have my blood”, Ned says in season 1.

The siblings eventually reunite at the crypt’s end and come face-to-face with three tombstone statues… of themselves – not the best plot twist for those hoping for a happy ending.

© AP Photo / HBO, Keith Bernstein, File
Twitterverse Shatters as Game of Thrones Teaser Unveils Major Plot Twist
In the final seconds of the grimmest teaser so far, frost descends, extinguishing the torch in Jon’s hand, which gives an inkling of an icy fate beneath Winterfell. Jon and Arya are seen simultaneously pulling out their swords and showing that they are ready to fight against the White Walkers.

Unsurprisingly, fans of the show have been analysing – maybe even overanalysing – the clip to find any hints as to how the event will unfold.

A vast number of viewers have suggested that the statues mean that the three siblings will meet their mortal end, although they assumed that Jon looked old, while his sisters were seemingly the same age they are now:

I’m sorry but the fact that Jon’s statue is of him older and Sansa and Arya are them now is making me so emotional 😢 #ForTheThrone #ijustwantthestarkstobealiveandhappyforonce pic.twitter.com/obmSer767Z

The statues are of themselves. I am not ready. #GameOfThrones pic.twitter.com/QlZKVDQkQp

And Johns the only one aged in his statue 😭

Was it just me or was Jon’s crypt statue the only one that looked old?? Foreshadowing?

Even though the footage is quite dramatic, and fans are obviously not in the mood for jokes, one netizen couldn’t help but poke fun at the statues:

Many have noticed that while the troika was shown in the footage, their brother Bran was not there with them. Some pointed to the long-standing theory that Bran is the Night King – the warlord of the White Walkers.

I think Bran Stark is lowkey the Night King bc look at his left eye. Anyone else see the pale blue that resembles the Night King's eye? No? Okay gnight pic.twitter.com/U0MFUoM3MX

#GoT people who watched the trailer…

So Bran is the Night King confirmed after the trailer? Yes? Yes? Cool glad we agree.

I’m calling it. Bran, aka the Night King, is walking towards them. #ForTheThrone https://t.co/BZpHY3IRnd

OKAY SO. I have been slowly allowing the Bran = Night King theory seep into my brain as time passes. And this trailer…

There's one living Stark who's not apparently "invited" into the Winterfell Crypt. But then, it seems that maybe he shows up, but he brings cold with him. https://t.co/pWY8naQUsL

This makes me give more thought to Brain being the Night King. https://t.co/dMYF7lfPql

One Twitterian tried to explain that Bran had similar facial features with the Night King:

You laughed at my ‘Bran is the Night King because they have a similar facial structure’ theory for years but who feels ridiculous now. https://t.co/uQKe3sQuZo

look at that chin 🤷‍♂️ pic.twitter.com/5pFTJ1e9qC

The lion’s share of social media users are overwhelmingly excited at the trailer and are longing for the season’s premiere to find out how the show is going to end:

Do they all die??? Is Bran the Night King?? WHERE ARE THE LANNISTERS?? WHERE DEM DRAGONS AT?????? pic.twitter.com/3pf2l8ecOk

When you get excited about seeing the Starks reunited then remember that the Night King and his army is about two dragon flaps away from destroying Winterfell #ForTheThrone pic.twitter.com/4eQ8y2iSOQ

Me watching the got teaser and trying to understand the implications pic.twitter.com/CXHqgHEFvn

bran is the night king, arya kills bran which then leads to all the white walkers dying and then kills cersei with jaimes face 💋 pic.twitter.com/ERW43oOk22

© AP Photo / Evan Agostini/Invision/AP
Netizens Claim Game of Thrones Dragons May Not Be Dragons at All
The wildly popular theory that Bran is the Night King has been the making rounds on the internet since 2017.

There have been several occasions where the leader of the Army of the Dead appeared to know what was going to happen before it actually did, and Bran’s abilities as the Three-Eyed Raven would explain how the Night King can predict the outcome of certain events.

The eighth and final season of HBO’s biggest hit, Game of Thrones, will premiere on 14 April.