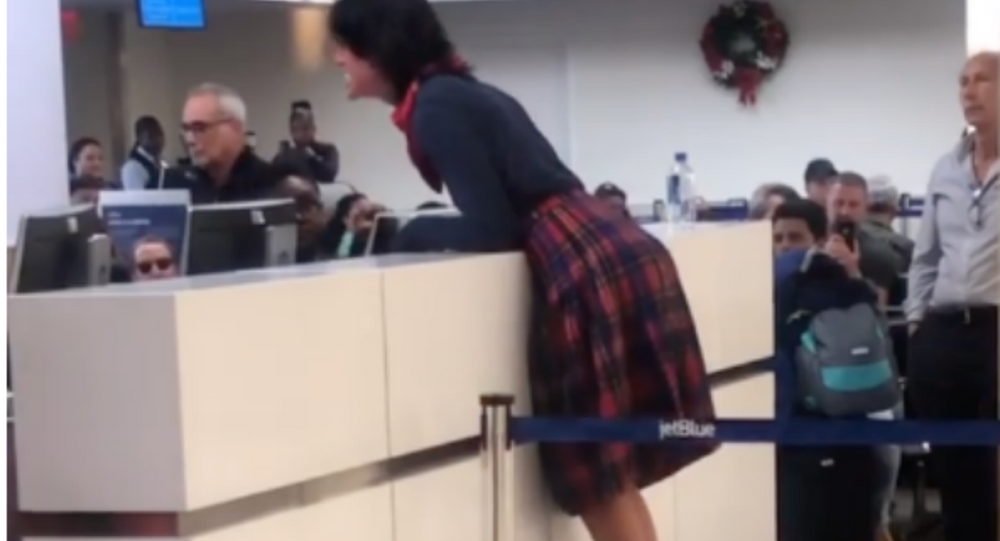 ‘Rapist!’ US Woman Loses It in Airport After Being Denied Boarding (VIDEO)

An woman scheduled to take a JetBlue flight from Fort Lauderdale-Hollywood International Airport in Broward County, Florida, Sunday had to be restrained by police instead after she had a hysterical outburst at the gate, accusing random people of crimes and claiming to have a gun.

A video of the incident was shared Monday by Instagram user Drelondon.

I wake up this am to my video going viral & many calls including @foxnews — So yesterday I was stuck in the airport for 10hrs as #JetBlue flight was canceled due to computer failure. They said we would send another plane from New York but this took many hrs. While in Fort Lauderdale airport everyone remained calm apart from this woman who went crazy on #JetBlue staff called him a rapist & she said she had a gun on me + many crazy things in front of kids Swipe right to see the end of chaos🤦🏽‍♂️

"I wake up this am to my video going viral & many calls including @foxnews," the caption of the video begins.

"So yesterday I was stuck in the airport for 10hrs as #JetBlue flight was canceled due to computer failure. They said we would send another plane from New York but this took many hrs. While in Fort Lauderdale airport everyone remained calm apart from this woman who went crazy on #JetBlue staff called him a rapist & she said she had a gun on me + many crazy things in front of kids Swipe right to see the end of chaos," the caption continues.

The first video, which has received almost 8,000 "likes," shows the woman yelling at a JetBlue employee while hoisting herself up on the counter.

"Get me out of here!" she repeatedly yells at at the JetBlue employee, who appears to be on the phone calling security.

At one point, she calls the employee a "rapist" and claims to be carrying a "f**king gun" because she is "homeless." A few minutes later, she is seen grabbing her bag while walking away from the camera while other passengers can be heard discussing her gun threat.

In the second video also posted by Drelondon, the woman is pictured on the ground with her head down and her arms behind her back while a security official hovers over her. The video cuts short when it appears as though an airport employee tells the man behind the camera that no photos are allowed.

Another video circulating on Twitter shows the woman yelling, "I hate white cops" as she was arrested.

​In a statement to Yahoo Lifestyle, a spokesperson for JetBlue said, "The customer in the viral video was scheduled on a flight which did not experience any major delays."

Instead, she wasn't allowed to board her flight because she was intoxicated, JetBlue added

"On January 6, crew members at Fort Lauderdale-Hollywood International Airport requested assistance from local law enforcement after a customer was denied boarding for indications of intoxication and became disruptive," the spokesperson added.

The Broward County Sheriff's Office and JetBlue did not immediately respond to Sputnik's request for comment.