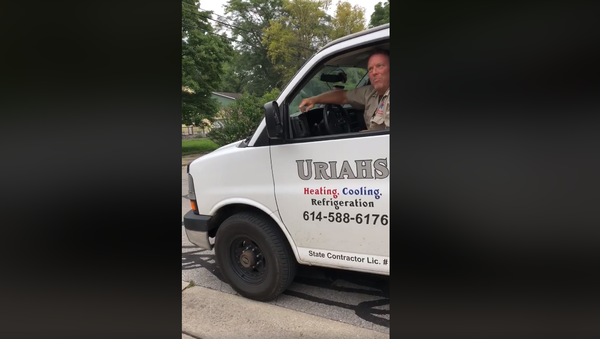 © Facebook/CharlesLovett
Subscribe
International
India
Africa
An Ohio man driving a Uriah’s Heating, Cooling and Refrigeration van was captured on camera repeatedly calling a black driver a “n***er” for honking at him at an intersection.

According to Charles Lovett, who was on the receiving end of the abuse, Jeffrey Whitman, the driver of the van and a contractor for Uriah's, nearly sideswiped Lovett Tuesday at an intersection near Interstate 81 in Columbus, Ohio.

Lovett responded by honking at him. Whitman then, according to Lovett, followed him all the way to his home to hurl racial slurs at him.

Lovett uploaded a video of the interaction on Facebook Tuesday with the caption, "So this is [what] happened to me this morning. A man followed me from the interstate exit to my house, and then proceeded to berate me with the most disrespectful word to any African American."

In the post, Lovett writes that he considered not sharing the incident because he feels he could have handled it better — but ultimately decided to go public because no minority group in the US "deserves what's been happening to us across the United States here lately. This incident is just one of many sadly."

In the three-minute video, which has been shared 25,000 times so far, Whitman can be heard saying, "I just want to let you know what a n****r you are," after Lovett asks him what he wants. "You're a rude n****r," the man continues.

Whitman then accuses Lovett of being entitled for supposedly cutting him off at the intersection.

During the interaction, Whitman also implies that Lovett hasn't worked for what he owns.

"You got a job? You paid for that?" he asks, referring to Lovett's car.

"I'm glad I got all this information that I'll be sending to the state," Lovett tells Whitman, referring to the contractor company's state license number, which is written on the side of the truck.

"I never would have expected it to happen to me," Lovett told NBC4 Tuesday. He also filed a police report against the contractor after the incident, but no charges have been filed yet by police.

On Tuesday, NBC4 reported that they went to the address listed for Uriah's and tracked down Whitman. Although the driver refused to give his name at the time, he was willing to talk to NBC4's Rob Sneed.

Viral
WATCH: US Man Tells Restaurant Owner to ‘Go Back to Afghanistan’ in Racist Rant

"I didn't follow him home. The way I confronted him, I confront him as, ‘Hey, you cut me off,'" Whitman told Sneed.

Whitman, who says he doesn't regret calling Lovett "n****r," still claims that he didn't follow Lovett home. He also refused to apologize for his actions.

"I don't know if it makes it right or wrong; all I can say is I grew up with it," Whitman told NBC4, saying it's "not a big deal for me."

In interviews with ABC6 and FOX28 on Wednesday, however, Whitman said that he is not racist, regrets the incident and "lost his head." He also added that he has received threats from strangers since Lovett posted the video on Facebook.

In a statement published Wednesday by ABC6, Whitman issued a lengthy apology.

"To Charles Lovett and the community, I apologize for my use of the n-word towards Charles Lovett on Tuesday, July 24. I understand that using the n-word was not only hurtful towards Lovett as an individual, but hurtful towards the black community at large. Using the word was dehumanizing, unacceptable, and inexcusable. My actions reflect an unhealthy mindset I have developed and I need to work to change. I have served the black community for the last nine years, installing furnaces and water heaters with pride."

"My actions that day are not a reflection of my feelings towards the black community. I also understand that racial tensions in America are higher than before, and I regret my part in contributing to that tension. I realize that words are hollow without action, and because of the hurt I have caused, I hope I have the opportunity to give back to the black community that I have harmed in a meaningful way."