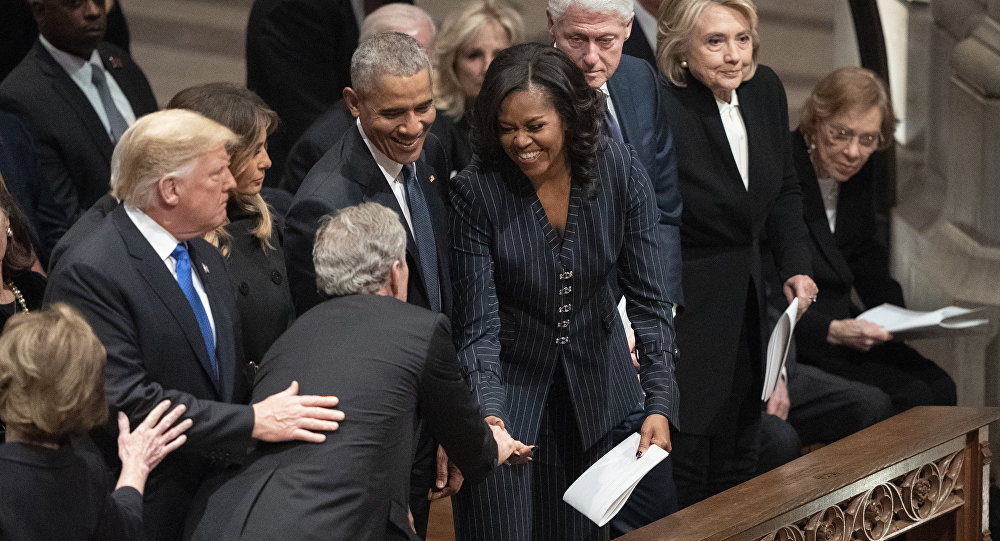 Michelle Obama has once called George Bush her “partner in crime” at every major event where all former resident of the White House gather to highlight the importance of their friendship for her.

Former US President George W. Bush took a moment to slip another candy to ex-FLOTUS Michelle Obama during the funeral of his father and 41st POTUS George H.W. Bush.

During the funeral for #Bush41, George W. Bush slips Michelle Obama a piece of candy. pic.twitter.com/jOYuMODHAz

Bush greeted former and current presidents and their wives on the bench with handshakes before having this heartwarming exchange with Michelle, who couldn't help but chuckle as she was handed the mint.

This friendship ritual received a warm welcome on Twitter, with social media users saying that the gesture was extremely cute and classy:

Yeah that's cool and all, BUT DID YOU GUYS SEE GEORGE BUSH HAND MICHELLE OBAMA THAT SECRET FAMILY CANDY!!! THAT WAS THE CUTEST THING EVER!!! pic.twitter.com/Ih4AZ3U1Qi

Sweet gesture by the former President to the former First Lady by remembering she appreciated the gesture of a candy before. That is class, which his father also had, just as the Obamas have too.

Other netizens pointed to the fact that Bush actually took time to think it through despite grieving, and suggested that their friendship was a “ray of sunshine on a somber day”:

The idea that he took the time to prepare to do this says everything about his character.

Humor is the answer on a day like today. And I think his father would have loved this!

Humor is the answer on a day like today. And I think his father would have loved this!

I adore their friendship so much. It's nice to see genuine moments, especially in these times.

@MichelleObama's reaction was the sweetest (no pun intended) thing — a little laugh because that was a funny thing to do, followed by a look like, "He's grieving his father and thought to do this." ❤️❤️❤️

Some shared a video compilation and a photo of the two hugging to show that they have history:

One netizen couldn't resist imagining Melania Trump's thoughts at the exact moment of the sweet exchange:

Just three months ago, Bush was caught on camera passing a cough drop to Michelle in an exchange that went viral during the funeral of late Senator John McCain.

George Bush sneaking Michelle Obama some candy during John McCain's funeral might be the video that saves the Republic pic.twitter.com/GvQscSvO5y