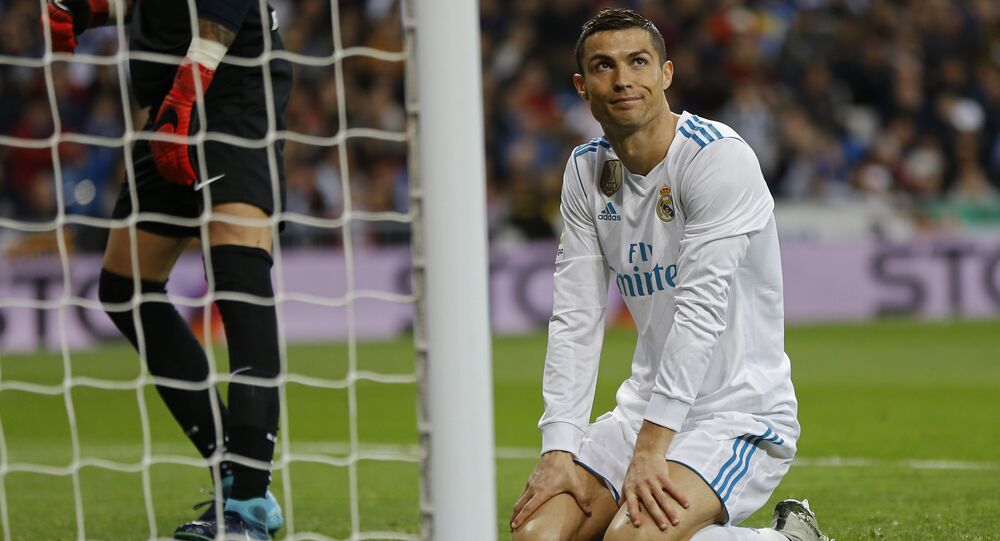 The woman claims that she met Ronaldo in the VIP area of the Rain nightclub inside the Palms Casino Resort in June 2009, with paparazzi having caught the moment of the two chatting and smiling on camera.

On Friday, 34-year-old Kathryn Mayorga filed a lawsuit in Clark County, having accused the Juventus star, Cristiano Ronaldo, of anally raping her in a Las Vegas hotel in 2009.

READ MORE: Ronaldo's WAG Trolled as He Bursts Into Tears After Getting Red on Pitch

© AFP 2021 / MARTIN BUREAU
'Mirror, Mirror, on the Wall': Ex-England Player Claims Naked Ronaldo Boasted He's Better Looking Than Messi
Shortly after their acquaintance at a nightclub, the then-Manchester United player invited Mayorga and her friend to his luxurious suite, where he offered her some clothes so that she could get into the hot tub.

In an interview with Der Spiegel, Mayorga said that he walked into the bathroom while she was changing and exposed himself, asking her to engage in a sex act. When she refused, he allegedly promised to let her go if she kissed him.

“I was laughing at him because I thought, 'Is this a joke?' This guy that is so famous and so hot… he's a frickin' loser and a creep. […] He starts to come on to me very strong. And he starts to do stuff to me and touch me and grab me. I pushed him away and kept saying, ‘No’,” she said, adding that despite her protests and screams to stop, he assaulted her.

The court documents claimed that once “Ronaldo completed the sexual assault, he allowed her to leave the bedroom stating he was sorry, he was usually a gentleman.”

"He gave me this look, this guilty look. Almost like he felt bad. I don't remember but I'm pretty sure he said 'sorry' or 'Are you hurt?' And by this time, he's (…) on his knees. He says the 99 percent thing," Mayorga added, saying that he claimed he was "a good guy" except for the "one percent."

After the alleged rape, she panicked, asking him if he had suffered from any sexually transmitted diseases (STDs), but he assured her that he got “tested every three months,” because he was a professional athlete and “couldn’t play my game with a disease.”

Der Spiegel’s journalists, who conducted the investigation, said that evidence of the alleged rape had been documented and photographed – Mayorga showed up at the police station and went through a rape kit examination, although refused to disclose the name of the assailant.

Mayorga didn’t seek to come forward with her story, allegedly being “terrified of retaliation” from Ronaldo; she hired a lawyer in 2010 to negotiate an out-of-court settlement: she pledged never to go public with her allegations in exchange for $375,000.

Mayorga’s current lawyer, Leslie Stovall, told Der Spiegel that he had filed the civil complaint to declare the hush agreement against his client void, and would also be pursuing damages against the footballer.

“The purpose of this lawsuit is to hold Cristiano Ronaldo responsible within a civil court of law for the injuries he has caused Kathryn Mayorga and the consequences of those injuries,” he said, alluding to Mayorga’s statement that she had suffered clinical depression and PTSD in the aftermath of the alleged rape.

Meanwhile, a spokesperson for CR7 dismissed the article by Der Spiegel as “nothing but a piece of journalistic fiction.”

“The accusations reported by the Der Spiegel are false, and Cristiano Ronaldo will do everything in his power to react against these. An accusation of an act of rape is disgusting and outraging, and he will not allow it to hang over his reputation.”

The Juventus star has also reacted himself in an Instagram live video, having told his millions of followers that the accusations were “fake news.”

“No, no, no, no, no. What they said today? Fake, fake news. They want to promote [themselves by using] my name. It’s normal. They want to be famous to say my name, but it is part of the job. I’m a happy man and all good.”

*@Cristiano Ronaldo spoke about the rumored rape allegation against him*
.
You don't need to explain anything to anyone king, we know you and we know what kind of person you are.
No need to give any explanation to anyone, we are with you, as always. 👑 pic.twitter.com/L3WdwhThSy

The player’s lawyer, Christian Schertz, for his part, issued a statement, saying that the Spiegel’s piece was “an inadmissible reporting of suspicions in the area of privacy.”

He also added that he would seek compensation from the media outlet for “moral damages in an amount corresponding to the gravity of the infringement.”