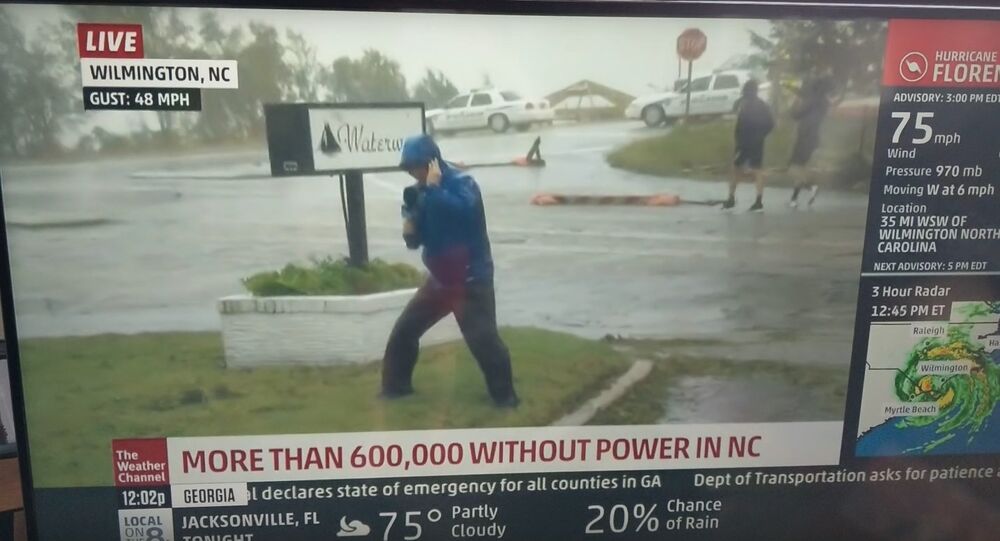 Mike Seidel, a well-known American meteorologist, whose career is marked by field reporting from hurricanes and severe snowstorms, was doing a routine live report on Hurricane Florence.

As he was filmed apparently struggling to maintain his footing in the wind, the video, which has since gone viral, happened to include two passersby nonchalantly strolling around, seemingly without any strain or trouble, in the background of his live coverage.

So dramatic! Dude from the weather channel bracing for his life, as 2 dudes just stroll past. #HurricaneFlorence pic.twitter.com/8FRyM4NLbL

The clip was roundly blasted on social media platforms as a vivid example of media outlets sensationalizing or exaggerating the dangerous conditions of the hurricane.

That’s too funny. 🙄 proof as we know that they always dramatize it.

The media likes to stage their shots to be much More traumatic than they actually are, they use fog machines, they place the cars and the crime tape and exact positions, they put additional props around, it’s very misleading. They’ve been doing this for years

The hilarious thing is those 2 in the background are THE MOST CASUAL WALKERS I’VE EVER SEEN!!! The definition of a Sunday Stroll!! I think one dude is even chatting on the phone without a single care in the world. What a clown the reporter looks like…definition of a TOOL!

Not to downplay the intensity of tropical storm Florence, but this reporter for the Weather Channel is acting as if he was hanging on for dear life when two guys bomb his report as they casually stroll by… pic.twitter.com/42yN5xAvNF

the strom is real but they are over playing it and that is what is bad. What about the next storm that comes and they start saying the same things, people will not believe them, maybe that next storm will be a CAT 3 not a CAT 1. Then even more people may get hurt

And he Oscar goes to pic.twitter.com/KTuS6ar1cI

Some even shot parodies of the original video:

I’m Banner, reporting LIVE from CNN In the heart of Hurricane Florence

In a bid to defend the meteorologist, the Weather Channel issued a statement:

“It’s important to note that the two individuals in the background are walking on concrete, and Mike Seidel is trying to maintain his footing on wet grass, after reporting on-air until 1:00 a.m. ET this morning and is undoubtedly exhausted,” it read.

This is not the only time that weather reporters have demonstrated a flare for the dramatic; for instance, meteorologist Lucy Chang embraced some elements while covering the flood in Bound Brook, New Jersey, in 2010:

The hurricane hit the US on Saturday, killing 5 people in North and South Carolina. According to official data, over 27,000 people in the two US states remain in temporary shelters, while over 2,100 flights have been canceled as a result of the storm.