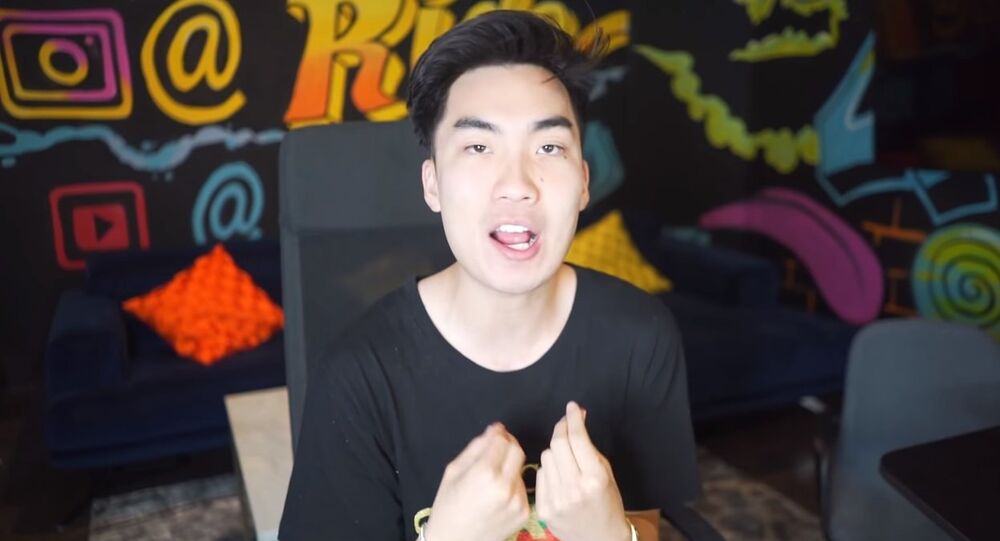 The vlogger has since apologized for the video highlighting his visit to Hong Kong, while insisting that people are taking his "stereotype jokes" too seriously.

Asian American YouTube star, RiceGum, whose real name is Bryan Le, has landed in hot water for sharing a clip, “Why I left the Clout House,” of his trip to Hong Kong.

After a brief hotel tour, he and his friend went outside, asking locals which restaurants served dogs despite the fact that eating dog and cat meat has been strictly banned in Hong Kong, punishable by up to 30 days in jail. He also asked “where all the hoes at,” mocking random people for allegedly not speaking English.

Once the travel-vlog was uploaded to YouTube, where he has over 10 million subscribers, it received enough clicks to earn the attention of news outlets and social media users, who accused him of disrespecting Chinese people and their culture.

ricegum’s video of him coming to hong kong and slandering our culture is utterly disrespectful and pointless. here’s a thread on everything wrong that happened in the video but if you’re interested in watching what he actually did, here’s the video itself:https://t.co/MQMLUa1gZG

1. ricegum used japan’s flag instead of hong kong’s flag in the video but hong kong has our own flag (attached on the right for reference). futhermore, japan has NOTHING to do with hong kong. is it really that hard to google the correct flag? pic.twitter.com/JtojwgHAWN

2. ricegum said that the words on the sign are a different language and therefore he couldn’t read it. there are both english and chinese characters on the sign, surely he must be able to read it? besides, he’s stepping into a mainly chinese community, what did he expect? pic.twitter.com/bM5KEdhuSh

3. he said that “people here don’t speak english, i don’t know if that’s true because it’s such a popular language”. yes, english is used internationally, but does it mean that people are obliged to speak it? besides, most hong kongers are billingual unlike him.

4. “is that dog or something?” stop with the stereotypes that all chinese eat dogs. there are laws in hong kong that ban people from selling or eating dog/cat meat, it’s illegal. just because you’ve never seen bovine offal (cow intestines) before doesn’t mean that it’s dog meat. pic.twitter.com/zk4jt7aNeg

5. he went on the streets of hong kong and asked random people “where the hoes at?”. it’s so disrespectful for a foreigner to visit a place and ask the locals these questions, and he’s just taking advantage of the fact that he thinks the locals can’t understand english.

7. ricegum was eating this ice cream and he said that he was full, so he forced some random guy on the streets to eat it bc he didn’t want it anymore. there’s a saying in chinese that goes “if you don’t want it, don’t make others have it”. it’s not okay to treat people like this. pic.twitter.com/eOIUBOOeEy

9. ricegum and his friend saw that a shop was closing and still went in anyways. the staff there said “close” and he made fun of her english (bc close sounded like clothes to him) and said “they don’t sell clothes here!”. pic.twitter.com/AYIxVRStxl

basically what i’m saying is, ricegum should never come back to hong kong again bc he’s not welcomed here. if you’re going to visit a foreign country/city and completely disrespect the people there and their culture, you might as well not go.

Some drew parallels to Logan Paul’s clip in Japan’s suicide forest when he joked about a dead man’s body:

Dear @YouTube @TeamYouTube Why do you keep promoting Youtubers who disrespect Asians? We had Logan Paul in Tokyo, now Ricegum in Hongkong. I live in Taiwan if a Youtube celebrity came here and mess with us are you going to promote them???

First Logan now Ricegum. I cant wait to see who's next

Others accused him of "blatant" racism and said that they couldn't believe that an Asian would insult Asian culture:

I’m originally from Hong Kong and what Ricegum did was seriously ignorant and disrespectful. I’ve never been so mad at some irrelevant YouTube “celebrity” because it was seriously insulting. I can not believe some Asian dude would be so opened of insulting another Asian culture.

Who you become as RiceGum in your videos is disrespectful, ignorant, borderline racist, & shameful to all creators, especially Asians.

and dude, you can’t pull the “It’s not racist I’m Chinese and making fun of my own culture” when you are:

A. Not actually funny at all
B. Show zero actual connection to your culture.
C. Care more about views and money than anything else

Lmao I watched that new ricegum vlog because it was apparently in Hong Kong and I’m so glad he left??? The disrespect he shows in that video towards normal citizens is disgusting and there is literally no way to excuse blatant racism? Stay out of my city, we don’t want you here.

So I am an Asian from China, can I do Logan Paul in Japan? or RiceGum in Vietnam? racism is racism, stop cover everything up for that stupid v-yank.

i cant wait to watch ricegum's apology video on his disrespectful antics in hong kong where he'll kind of apologise but try to deflect with the 'I'm asian too' card;^))) xxxxxxx

Fellow YouTubers took aim at RiceGum, including Fulinfang, a highly popular foreign vlogger based in China.

“Although I think I’m pretty respectful to Chinese culture, and I love living in China, a video like this is giving foreigners living here a bad name. I don’t think it matters if you’re a local or foreigner, or if you’re just traveling — everyone should respect the locals. And they should also respect the local culture,” Fulinfang said.

“RiceGum, it’s so rude and embarrassing to watch someone do this. His video is so stupid. It reminds me of Logan Paul’s video in Japan being an idiot. I’m a foreigner, and so is he, but he obviously has Asian heritage, so why would you come to Asia to mug everyone off?”

Responding to the massive backlash, RiceGum uploaded a video, “Why Everyone in China Hates Me,” where he said he was frustrated with the way Chinese misinterpreted and perceived his video. He went on to explain that by “hoes” he meant “girls,” not “prostitutes” as suggested by users and media.

“Chinese people are hating on me right now, and it’s like, I’m Chinese also. In the American culture, I watch like black comedians make jokes about black stereotypes. White people make white jokes and hispanic people make hispanic jokes, and I thought because I’m Asian, I was allowed to make these Asian stereotype jokes,” he said.

He then quickly apologized and added that he wanted to return to Hong Kong soon but was scared because of the feedback to the vlog.

“Sorry to all the Chinese people, I wasn’t trying to be disrespectful. And I want to come back soon, but I’m kind of scared now because the people may hit me and beat me up.”