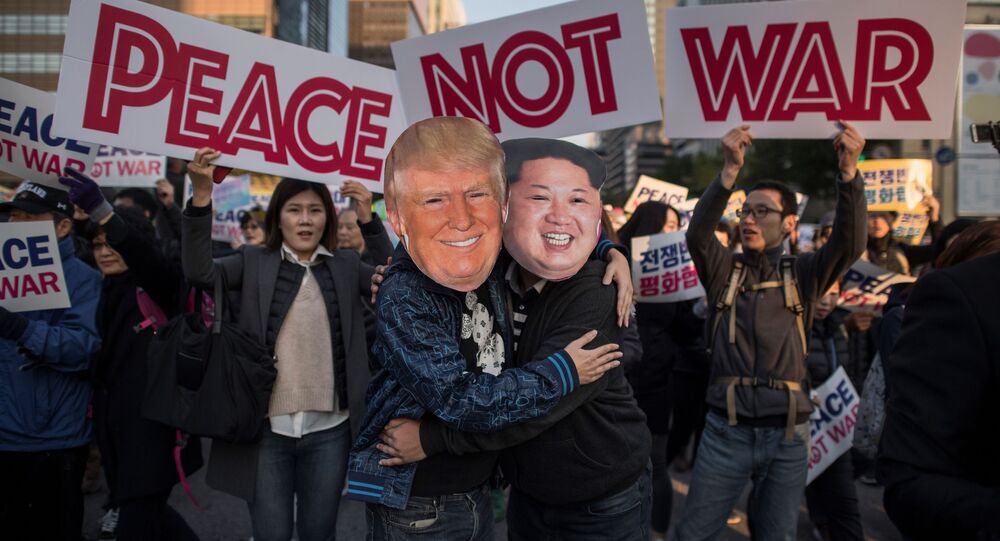 Social media users were thunderstruck when they found out that US President Donald Trump and North Korean leader Kim Jong-un would meet in person “as soon as possible.”

After Kim told South Korean National Security Adviser Chung Eui-yong that he was committed to denuclearization and would refrain from future nuclear weapons' tests, and was willing to meet his American counterpart, President Trump responded positively to Kim’s invitation to meet by May.

The deal with North Korea is very much in the making and will be, if completed, a very good one for the World. Time and place to be determined.

Twitterians were quick to react to the astonishing news, as the Trump-Kim meeting would be a historic benchmark in the relations between the US and North Korea.

Many started imagining what Trump’s requests for the meeting would be like, trolling some of his habits:

Leaked memo of Trump's requests for his meeting with Kim Jong-un pic.twitter.com/3Yn9ugLl0d

If trump and Kim Jong Un do meet, that is gonna be… the… CUTEST little handshake.

…and thinking of the prospects of Trump-Kim potential “bromance”…

Kim is on the Trump train. pic.twitter.com/FAT0VPszmV

Some even predicted catchy headlines that the mainstream media would make up to degrade Trump, accusing him of collusion with the North Korean leader:

I can almost anticipate MSM twisting this whole NoKo thing to degrade our @POTUS and his excellent job bringing peace to the peninsula.

#msnbc #maddow Putin clearly helped N Korea, develop nukes & the tech needed to hit USA…but is Putin now involved in Trump’s rush to speak to Kim? I’m not totally opposed to talks, but this admin is amateur hour on steroids, so now’s just not the time. 😳

That's because Put-in set it all up! Trump wants to meet with Putin not Kim and thinks nobody is wise enough to figure it out.

Others compared Trump to his predecessor Barack Obama, highlighting the former’s merits:

Obama won a Nobel Peace Prize while Kim Jong Un was stacking his country with Nukes to destroy America.

Trump already has Little Rocket Man at the table.

…and praising his great strategy:

Kim is in a corner. Any move he makes will destroy him. Trump has check mated him.
His only option to stay in power? Give up nuclear program & join the other law abiding nations, open borders & work to make his people become normal citizens.
Great strategy by POTUS.

I don't trust Kim Jong Un.
I don't trust Rosenstein.
I don't trust Mueller.
I don't trust a lot of people.
But I don't have to.
I sleep well at night because I trust that God has given #Trump the brains to analyze his opponents & the ability to use leverage to his advantage. pic.twitter.com/EpdWVQCJp3

Many say that no matter what Trump does, he'll always be criticized:

Liberals: “TRUMP’S TRYING TO GET US NUKED!”

It doesn’t matter what Trump does, liberals will still whine!

Very annoyed that people refuse to credit Trump for bringing Kim to the negotiating table. Trump gets 100% credit. Had it not been for Trump there would be no movement from NK.

If Trump succeeds in bringing Rocket Man to heel, The world will owe him big time for doing what no one else could. A well deserved Nobel peace prize perhaps?

One of the users even emphasized that Kim was willing to negotiate with Trump more than the Democrats were:

That moment you realize that Kim Jong Un is willing to cut a deal with Trump before Chuck Schumer and Nancy Pelosi.

Let that sink in…

…while another netizen brought to light an interesting fact:

Another user "impersonating" Trump outlined the preconditions the president would lay out before the meeting:

After criticism for leaping to accept invitation of #KinJongUn to talk, I agreed to set preconditions. #NorthKorea must show progress towards denuclearization. And Kim must sign a #Trump non-disclosure agreement, including any groping or nude photos that result from our meeting!

Some slammed Trump for his decision:

Accepting talks with Kim without preconditions just elevated Kim to the same level as Trump and diminishes USA's stature in the world in the eyes of other third rate despots.

Here's my concern; Kim Jung Un dangled a carrot, Trump impulsively grabbed it. Now Trump looks like an even bigger fool and he's going to know it. What then? That's the scary part.