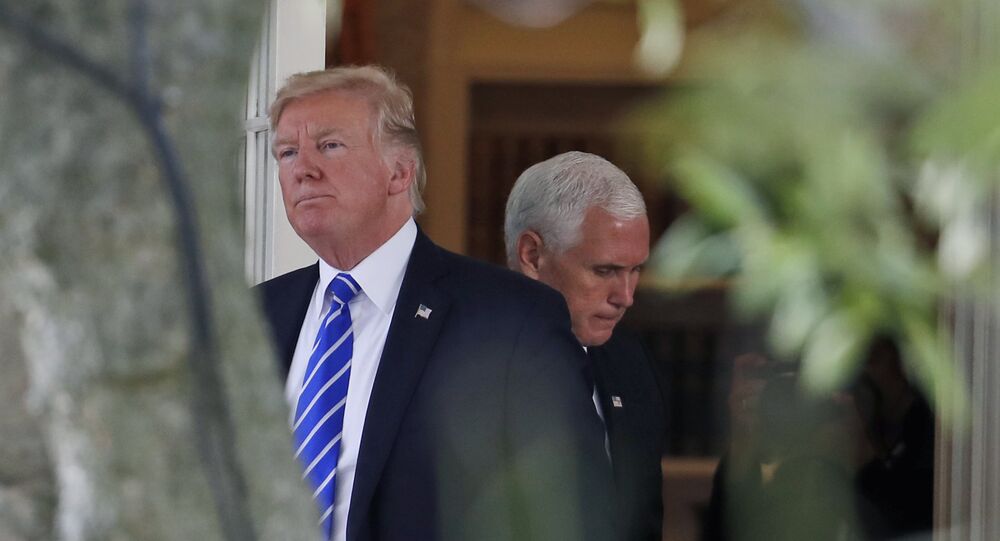 WASHINGTON (Sputnik) - US President Donald Trump's tough policies on North Korea have succeeded in encouraging Pyongyang to come to the negotiations table, Vice President Mike Pence said in a statement.

"North Korea's desire to meet to discuss denuclearization — while suspending all ballistic missile and nuclear testing — is evidence that President Trump's strategy to isolate the Kim regime is working," Vice President Mike Pence wrote in the statement.

According to the statement, whichever direction talks with North Korea go, US will be firm in their resolve.

"The United States and our allies remain committed to applying maximum pressure on the Kim regime to end their nuclear program. All options are on the table and our posture toward the regime will not change until we see credible, verifiable, and concrete steps toward denuclearization," the statement reads.

Pence noted that US policy on North Korea has not changed and Washington will continue to put maximum pressure on Pyongyang to take concrete steps and end its nuclear program. The same position was voiced by Secretary of State Rex Tillerson.

On late Thursday, South Korean National Security Advisor Chung Eui-Yong said Trump had agreed to meet with Kim by the month of May on achieving permanent denuclearization. Chung added that the North Korean leader has also agreed to halt nuclear tests.

"I think last night’s announcement is welcome, but it’s too early to say, and the maximum pressure campaign is not going to let up yet," Treasury Department Deputy Director of the Office of Foreign Assets Control (OFAC) Andrea Gacki said in Washington, DC during a panel discussion for the Atlantic Council.

Tessler said Thursday's announcement was a sign that the tough sanctions are starting to have an effect on the Kim regime.

US President Trump also commented on the situation on Twitter.

Trump announced on March 1 he would impose a 25-percent tariff on US imports of steel and a 10-percent tariff on aluminum for an indefinite period of time. Despite judgment from lawmakers and foreign leaders, the US president said he would not back down on his words.

Tensions escalated on the Korean Peninsula after the United States and North Korea traded threats and insults following Pyongyang’s nuclear and ballistic missile tests in more than a year. The tests were conducted in violation of UN Security Council resolutions adopted to impede the development of the country’s nuclear program.