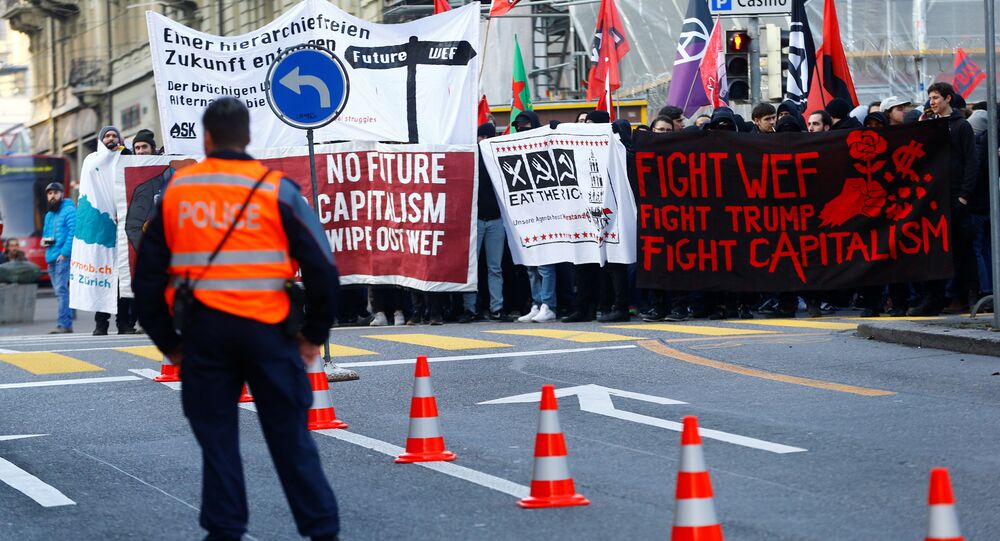 The Swiss capital of Bern has seen anti-Trump protesters take to the streets in a protest against the unpopular US leader's attendance at the World Economic Forum in Davos this month.

Demonstrators supporting anti-globalization hit the streets in Bern on Saturday protesting the attendance of US President Donald Trump at the upcoming World Economic Forum (WEF).

© AP Photo / Eliana Aponte
‘Honor-Bound to Resign’: US Ambassador to Panama Quits Because of Trump

Trump declared that he would fly to Switzerland to attend the WEF, a heavily-guarded annual gathering of the world's wealthiest business and political power brokers in Davos, Switzerland.

The strikingly unpopular US leader's attendance may see a resurgence of the same violence that swept anti-WEF protests in the early 2000s according to reports, while an online petition is rapidly gaining support to encourage the unpopular Trump to stay home, cited by Reuters.

The black-clad anti-globalization protesters carried signs saying "no future for capitalism," "eat the rich" and "Kill Trump," according to reports. Marchers also set off flares during the otherwise peaceful Saturday event.

An estimated 5,000 soldiers of the Swiss army, as well as some 1,000 police, have been deployed to the mountainous town for the prestigious event, and a no-fly zone will be implemented.