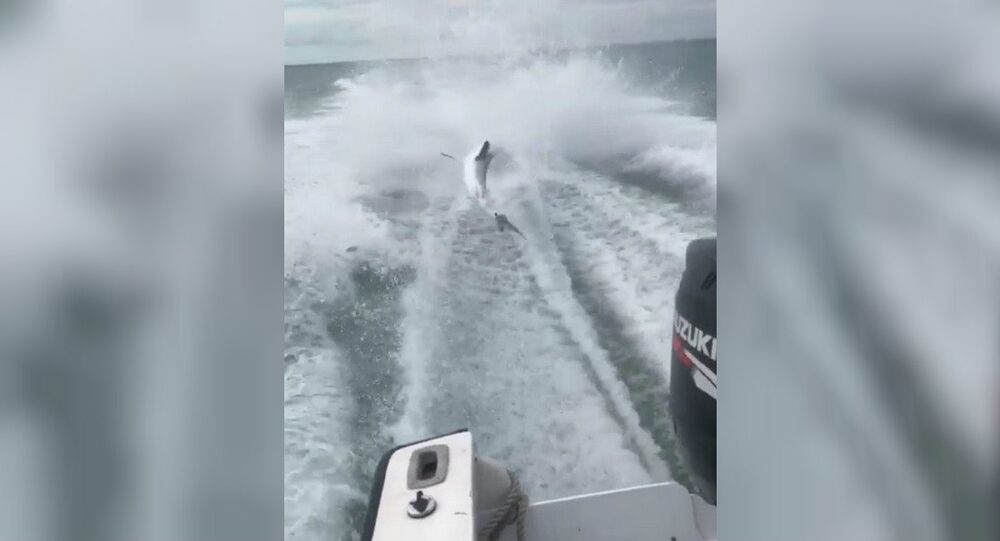 A "disturbing" video showing animal cruelty has caused a storm of public outrage. During the summer, a video surfaced showing three young men on a speedboat with a shark being dragged behind it with a rope.

In a statement, the FWC's chairman Bo Rivard thanked the public for their patience and support during the investigation, which has lasted several months.

"It is our hope these charges will send a clear message to others that this kind of behavior involving our fish and wildlife will not be tolerated," Bo Rivard said.

CAN SOMEONE PLEASE TELL ME WTF IS GOING ON HERE???? JUST GOT THIS ON MY FEED! SENT FROM @bearjew428 AND @MICHAELWENZEL.FOR ONCE I MAY HAVE TO AGREE WITH @PETA. #WHODOESTHISSHIT #sowrong #notcool

Youtube / Kami. vevo
Only in Australia: Brave Woman Catches Shark With Bare Hands on Mercy Mission
The three men involved were reportedly identified in July, but their names have only now been revealed to the public: Michael Wenzel, 21, Spencer Heintz, 23 and Robert Lee Benac, 28. All of them were charged with two felony counts of "aggravated animal cruelty," while Wenzel and Benac were also charged with misdemeanor counts of "illegal method of take."

"The State Attorney's Office is committed to holding these men accountable for having engaged in such senseless and unjustifiable animal cruelty," the FWC chairman added.

News of the upsetting video reached Florida Governor Rick Scott, who described it as 'disturbing' and asked whether new rules need to be adopted to prevent such things from happening in the future.

Users on Twitter reacted with joy to the news of the charges.

Awful human beings. I am glad that justice has been served. It's horrible that an animal had to suffer for them to learn their lesson — Three charged by @MyFWC in connection to #shark dragging video: https://t.co/SnvGzt8db0 … #lawenforcement #Florida

I want to share with my #livepdnation this news!!:) I have been waiting to hear this news for months now!!! I want to retweet it to everyone that I could share this with!! #livepd #florida #leo #lovefl #sharks #shark #animalcruelty #sharkdraggingvideo #sharkdragging #sharkdrag https://t.co/w2wrRIvaHw