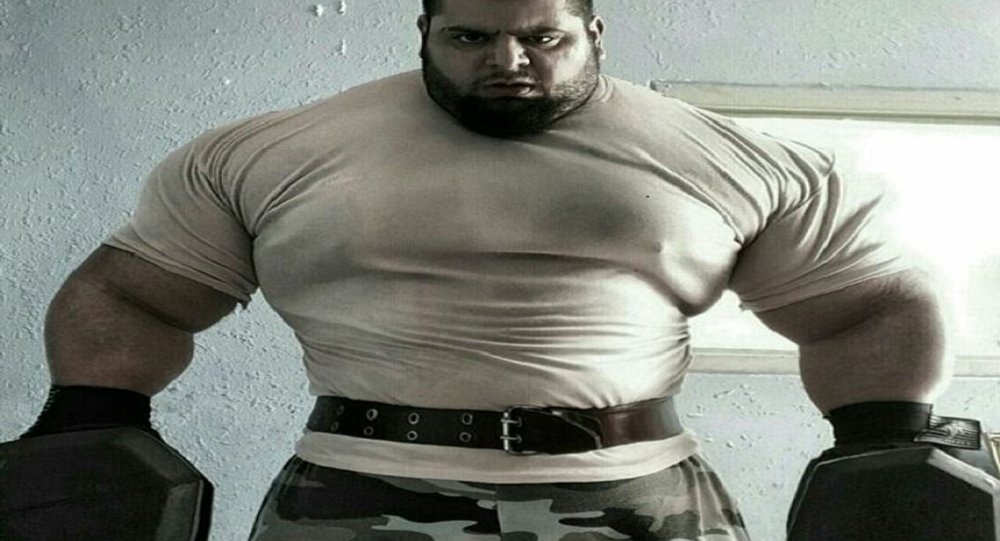 The astonishing physique of Iranian bodybuilder Sajad Gharibi has earned him plaudits and a host of nicknames, from "Hercules" to "Hulk;" in an exclusive interview with Sputnik, the 25-year-old shares the secrets of his success.

Iranian bodybuilder Sajad Gharibi has captured the attention of internet users with his hulkish physique, and currently has 344,000 followers on his Instagram account.

Sajad, who is 184cm tall and weighs 165kg, has been given several monikers including the "Iranian Hercules" and Rustam, the name of a legendary Persian folk hero. Some Western media publications have dubbed him the "Iranian Hulk."

In an exclusive interview with Sputnik Iran, muscular Sajad reveals that he once had another nickname, "Daesh executioner" — but it was all a misunderstanding.

"Daesh executioner," or how my Internet fame began with a misunderstanding

"I graduated in business economics from the University of Bushehr. At the moment I work in a real estate agency, but my main occupation is sport. For 10 years now I've been doing powerlifting. However, my popularity began with a misunderstanding: I was mistaken for a Daesh executioner who appeared on the Internet. People started talking about me and when they recognized me they thought I was a Daesh militant — this rumor even reached the media. But then one London newspaper wrote an article about me which changed people's idea about me. Since then, the media have published good things about me and I have received positive recognition throughout the world."

Training and genetics lead the way to muscles of steel

"I lead a really ordinary life. I do 2-3 hours of sport each day and sleep for 8 hours. If I have some work to do, then I spend 1.5 hours on sport and I work the rest of the time. Regarding food, I do eat differently from most other people. Usually I eat 4-5 times a day, but when I'm trying to bulk up I increase my meals to 7-8 times a day. I eat about the same things as every Iranian family does.  However, what distinguishes me from others is my genetics. My grandfather was also a big man and went to the zurkhaneh [a traditional sports arena where physical exercises and wrestling are practiced)."

The internet is full of rumors

"The most unpleasant story about me was the one about the Daesh executioner, it really worried me. There was another interesting rumor, that I was going to go to America to take part in no-holds-barred ring fighting. This rumor arose when [former Iranian-American wrestler, also known as the "Iron Sheik"] Hossein Khosrow Ali Vaziri invited me to America. I couldn't go there because I was serving in the military."

"I have received many proposals from different countries, but I am serving in the army at the moment. After I finish my military service, I would like to join a foreign club — with the permission of the Ministry of Sport. Unfortunately, bodybuilding as a sport doesn't get enough attention in Iran so I want to go abroad for professional development."

If my country needs me, I'm ready to go to fight in Syria

"When I was given the nickname "Daesh executioner," a lot of people from different countries, including Russia, began to associate me with terrorists. Above all, I want to protect my homeland and then, if necessary, come to the aid of other countries. I haven't signed up to serve anywhere and I want to continue my sport activities. If the Islamic Republic of Iran needs my help, if I am asked, I am ready to do that [go to Syria]."

"People on the street don't remember my name, but they really love me and they call me the "Iranian giant", the "Iranian Hercules" or "Hero." The phrase "Iranian Hulk" has already become a world brand. I am somebody who smiles a lot and I'm very polite with everyone. People don't have any reason to fear me — most of them want to take a picture with me."

Watch Incredible Hulk Get Acid-Green Glow in the Dark