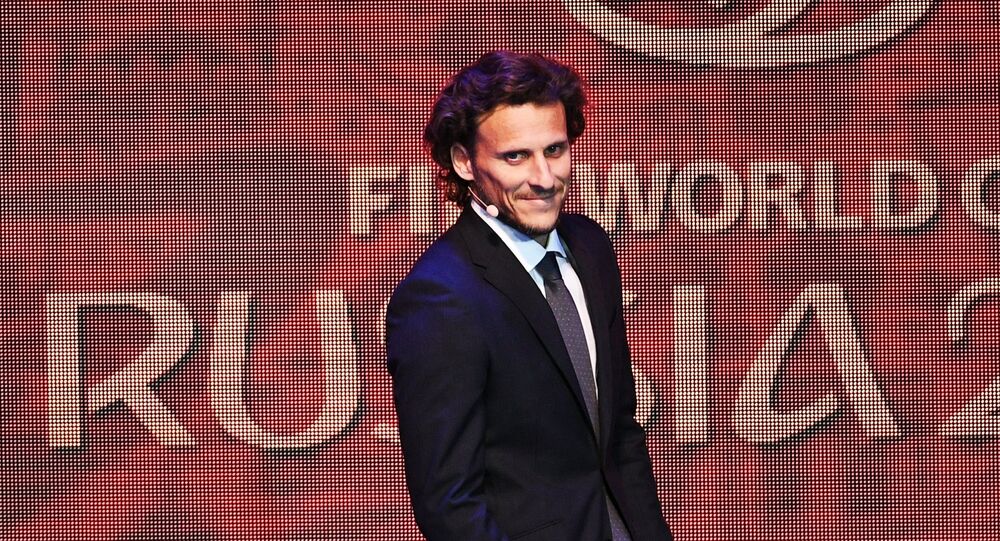 Diego Forlan, the former Uruguayan striker, is looking forward to the start of the 2018 FIFA World Cup in Russia. This time around he'll be a broadcaster for this colossal competition; previously he has been a FIFA ambassador and a simple spectator.

The footballer, currently playing for Chinese Kitchee SC, shared his hopes for the upcoming World Cup in Russia with Sputnik Mundo.

"We're talking about a world power with all the infrastructure and economy necessary for the World Cup. We're going to see great teams, lots of people are going to attend the matches, so I think it's going to be a good World Cup," he said.

Forlán, a participant in three World Cups and the best player at the 2010 World Cup, pointed out that as a host-country Russia has an advantage as it's already had some of the needed infrastructure. He's positive about the security that's been established by the host country.

Moreover, he highlighted the role of the VAR (Video assistant referee) system that's going to be used at the 2018 World Cup for the first time in the competition's history.

"If some other sports use this technology, why isn't it used in football? Clearly, it's more difficult to use in football but I think the results will be positive," the striker said.

FIFA 2018 is going to be an unforgettable competition also because of the return of the Peruvian team (the 1982 World Cup in Spain was the last time the Peruvian team played in the competition) and the absence of such strong teams as Italy and the Netherlands. Forlán thinks that these "surprises" come from the fact that in modern football "there's no history, no titles, no names, there's only commitment and effort to play well; and if there're no results, well, such things happen."

According to the striker, the rule of the game is balanced football. Today the team's goal deficit or lead is confirmed not only by "what's written on paper but also the team's performance when sometimes a weaker team can outplay a stronger one," he said.

This competitive equality makes it difficult to pick a much-fancied team for the World Cup. According to Forlán, the German, Brazilian and Spanish teams are "a step ahead" from all the rest of the teams. He also considers the French, Uruguayan, Argentine, Mexican and Belgian teams to be good.

As for the Uruguayan team, which played well at 2002, 2010 and 2014 World Cups, the striker thinks his team's group is "not difficult" but nonetheless "we need to be very careful."

"Both young and experienced players are in good shape and we hope for good results at this World Cup. The vital step is to won the group qualification and then we'll see," the footballer thinks.

As soon as this progress is achieved "we need to sum up the situation as it often happens that a fancied team can lose."  He thinks that Uruguay should take this into account as "the teams' level is becoming more similar."

According to Forlán, Uruguayan football stars like Edinson Cavani (Paris Saint-Germain) and Luis Suárez (Barcelona) "have high chances" to become this year's World Cup best players. However, he thinks that a player can be recognized only in the game itself by showing good footballing level.

Speaking of Óscar Tabárez, the Uruguayan team coach, and his performance he highlighted his "effort, sense of responsibility and the results" as "a single entity."

"It's important to clear the space for the young players and complete the script,"  the 38-year-old striker said.

Anyway, Diego Forlán is going to be at the Russian stadiums as a broadcaster for the American network Telemundo. He'll rest upon his "knowledge and experience."