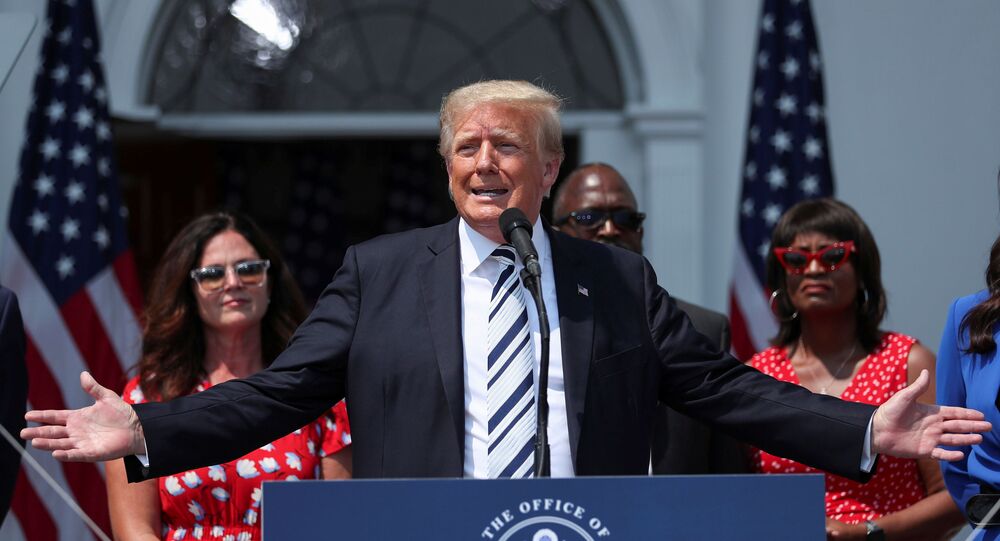 Despite the fact that Trump had to leave office in January this year, losing the presidential race to Joe Biden, he has not kept a distance from political developments both in the United States and abroad, hinting at possible future political endeavors.

Trump spoke about the final days of the Trump administration with the authors of "I Alone Can Fix It," who provided an excerpt from the book to Vanity Fair, at his Mar-a-Lago estate several months ago. In the interview, the ex-commander-in chief reportedly reiterated his claims that the 2020 presidential election was "rigged and it was stolen," calling it "the greatest fraud ever perpetrated in this country," and lashed out at those who, in his opinion, failed to restore justice.

While Trump slammed former attorney general Bill Barr for failing to do anything about it, it was the president's number two who lacked the courage to do "what was right," according to an excerpt.

“I don’t believe he’s just supposed to be a statue who gets these votes from the states and immediately hands them over. If you see fraud, then I believe you have an obligation to do one of a number of things," the ex-president added.

Trump reportedly recalled the case of Thomas Jefferson and the 1800 election, when the counting of votes in Georgia nearly cost him his victory, adding that when Jefferson found that the Georgia vote certificate was defective, he said that "we will take the votes from the great state of Georgia" and "he took them for him and the president."

“So I said, ‘Mike, you can be Thomas Jefferson or you can be Mike Pence,’" Trump said of Pence's response to the 2020 election scandals.

© AP Photo / Andrew Harnik
‘Too Much Credit’: John Bolton Says Trump Would Not Have Done Coup Due to Lack of ‘Advance Thinking’
In the same interview, Trump also slammed former House Speaker Paul Ryan, calling him a "super-RINO" (Republican in Name Only). He also claimed Mitch McConnell had "no personality" and lacked a "killer political instinct," according to Vanity Fair. He reportedly chastised McConnell for refusing to abolish the filibuster in order to push through Republican legislation and for failing to persuade Senator Joe Manchin of West Virginia to switch parties.

"He’s a stupid person. I don’t think he’s smart enough," Trump claimed. "I tried to convince Mitch McConnell to get rid of the filibuster, to terminate it, so that we would get everything, and he was a knucklehead and he didn’t do it."

© REUTERS / Shannon Stapleton
Police release tear gas into a crowd of pro-Trump protesters during clashes at a rally to contest the certification of the 2020 U.S. presidential election results by the U.S. Congress, at the U.S. Capitol Building in Washington, U.S, January 6, 2021.

The authors also claimed that he had wanted his supporters to gather outside the Capitol but never intended for them to go inside.

"Personally, what I wanted is what they wanted," the former president added of the people who stormed the Capitol. "They showed up just to show support because I happen to believe the election was rigged at a level like nothing has ever been rigged before. There’s tremendous proof. There’s tremendous proof. Statistically, it wasn’t even possible that [Biden] won. Things such as, if you win Florida and Ohio and Iowa, there’s never been a loss."

On Monday, The Daily Mail published photos reportedly showing Trump's Secret Service agents taking paintings of the former president with the caption "I am who I am" inside Trump Tower on Fifth Avenue in Manhattan, NYC.

US Court Dismisses Trump-Era Appeal Against Suspension on TikTok Ban