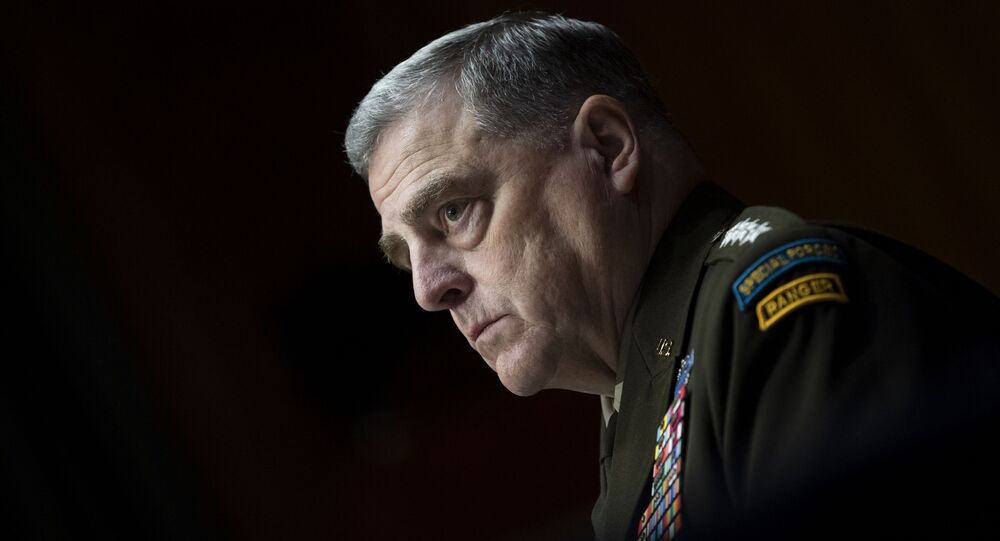 The US came close to engaging in a full-fledged confrontation with Iran much earlier, in January 2020 after the US Air Force assassinated the Islamic Republic's top general, Qasem Soleimani, during a visit to Iraq.

General Mark Milley, who has been chair of the US Joint Chiefs of Staff since 1 October 2019, was fearful that Trump might use the American military to stay in power after losing the 2020 election, The New Yorker has reported citing "a variety of sources". According to the media outlet, the general had these fears since the summer of 2020, when the outcome of the election was still hard to predict.

Milley reportedly had two "nightmare scenarios". In one of them, Trump would use the military on US streets to "prevent the legitimate, peaceful transfer of power". Not only did this scenario not come to life, but Trump dismissed all allegations that he planned any form of a coup following his election loss. The former POTUS further mocked the idea that he would rely on Mark Milley in this endeavour, calling him the "world's most overrated general".

The second scenario Milley had, suggested that Trump would have a "Reichstag moment" of his own, The New Yorker reported.

According to the media platform, the general feared that the president would resort to a tactic presumably used by Adolf Hitler, who created a domestic crisis by setting the Reichstag on fire and then came to the "rescue" of the country.

In Trump's case, Iran would play the role of the "Reichstag", if the president ordered to attack the Islamic Republic following the November 2020 defeat, Milley reportedly feared. Then-Israeli Prime Minister Benjamin Netanyahu, along with his hawkish advisers, reportedly encouraged Trump to attack Iran at the time, but Milley purportedly managed to push back:

"If you do this, you're gonna have a f**king war", he purportedly said.

In order to prevent either of these scenarios from occurring, Milley reportedly attended every morning briefing with the president and his staff. He referred to these video conferences as "land the plane" calls: "Both engines are out, the landing gear are stuck, we're in an emergency situation. Our job is to land this plane safely and to do a peaceful transfer of power the 20th of January".

The general also reportedly communicated with top military brass after the Novermber election, urging them not to follow any "unlawful orders" coming from Trump until they contact him. Milley additionally spoke with members of Congress, namely Speaker Nancy Pelosi and then-Senate Majority Leader Mitch McConnell, assuring them that the US military's allegiance lies with the Constitution and not POTUS and that any coup attempts on behalf of Trump would fail, The New Yorker's sources claimed.

Calls for POTUS to Sack Milley

Reports about Mark Milley's actions in the last months of the Trump administration and his comparison of the then-POTUS to Hitler have not gone unnoticed. Prominent conservative host at Fox News, Tucker Carlson, blasted the chairman of the Joint Chiefs of Staff over him calling Trump and "half our country" Nazis, arguing that Milley must be fired immediately by President Joe Biden.

Carlson added that according to the said reports, which Milley has not commented on yet, the chairman also tried to meddle in the process of civilian leadership, something he ostensibly could not do as a member of the military.

"Is the chairman of the Joint Chiefs of Staff the guy who's empowered by our Constitution, our democracy, to make those decisions? No, he's not. We have civilian leadership, he can't make them independently, if he disagrees, he can resign", the Fox News host noted.

No 'Apocalypse' in the Wake of Trump's Defeat

Following election day, reports started to emerge in the US media claiming that Trump mulled striking Iran's nuclear objects as a response to another round of rocket fire hitting the American Embassy in Iraq. Following the January 2021 Capitol siege, congressional Democrats even suggested stripping the president of his nuclear codes so that he could not start a nuclear war to stay in power.

None of the scenarios, purportedly considered by Milley, as well as those suggested by the US media, came to fruition despite Trump retaining the nuclear codes and his post until the end of his term. He begrudginly transferred power to the Biden administration while continuing to allege that voter fraud had taken place in 2020. The US never attacked Iran directly in response to rocket fire in Baghdad and the closest Washington came to war with Tehran was in January 2020 after the American Air Force assassinated top Iranian general, Qasem Soleimani, during a trip to Iraq. The latter was ordered by Trump himself.

No Coup for You