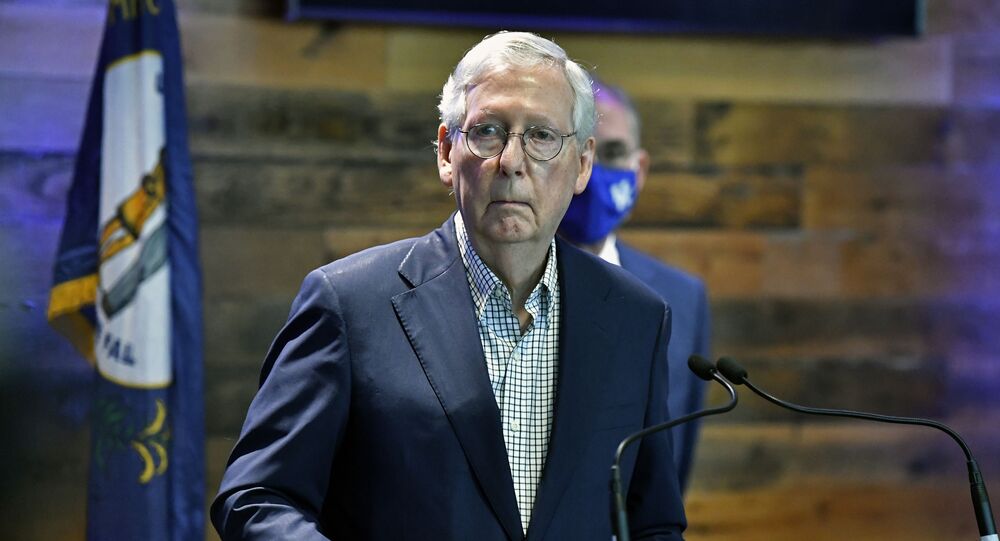 At an event with Republican donors at his Mar-a-Lago resort in Florida on Saturday night, Trump reportedly blasted his former ally as a "dumb son of a b*tch" and a "stone cold loser," the same weekend he won the National Republican Senatorial Committee's Champion of Freedom Award.

When asked about Trump reportedly calling him a "dumb son of a b*tch," Senate Minority Leader Mitch McConnell told reporters on Tuesday that he did not pay much attention to it and does not want to get into a fight with him.

"What I’m concentrating on is the future, and what we are confronted with here is a totally left-wing administration — with a slight majority in the House, a 50-50 Senate — trying to transform America into something no one voted for last year,” McConnell stated.

"That’s what I’m concentrating on," he reiterated, ignoring a follow-up question on Trump.

When asked about Trump's scorn in a Capitol corridor on Monday, McConnell also refused to reply, according to The Hill.

According to the report, Senate Minority Whip John Thune expressed hope that Trump can end their “one-sided” feud with McConnell.

"I wish he wouldn’t do it, but I don’t think there’s any way that you could change how he does things. I think we just have to adapt the best we can and stay focused on what are our objectives, and that’s get the majority back in 2022,” he reportedly said on Tuesday, adding that he is "hoping the president and leader at some point can come to an understanding."

"Right now, it’s sort of a one-sided thing. The leader has no animosity, and he’s made it very clear he wants to work with the president to get the majority back," he added.

Earlier, Trump repeatedly accused McConnell of not "fighting" for his own attempts to challenge the results of the 2020 presidential election and blamed him for the GOP losing two Senate seats in a runoff election in Georgia in January. He also said that McConnell lacks political intuition, wisdom, skill and personal qualities.

In February, McConnell said he would "absolutely" support Trump, should he decide to run from the party in the 2024 elections.

McConnell voted against the impeachment of Trump, but held him responsible for the January 6 Capitol riots. Back then a crowd from the former president's rally broke into the US Capitol and temporarily shut down the process of approval of the election results. Two people were killed as a result of the mayhem. The Senate acquitted Trump, as removal failed to gain the required two-thirds majority of the vote, although seven Republicans in the Senate supported impeachment on charges of incitement to insurrection.