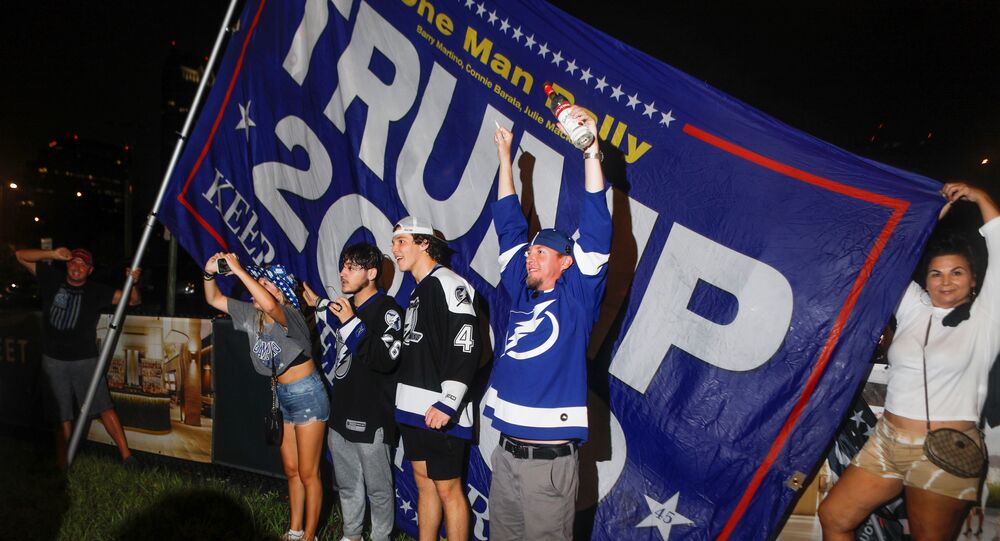 US President Joe Biden was declared the winner in Georgia in the 3 November 2020 presidential election by a margin of less than 12,000 votes — under a quarter of a percent — after counting was halted at around 4 a.m., with Donald Trump in the lead.

Donald Trump has welcomed findings of thousands of fraudulent votes for US President Joe Biden in the Georgia state capital of Atlanta.

In a statement on Wednesday, Trump seized on the allegations presented by a private election integrity campaign group, VoterGa, and its co-founder, Garland Favorito, of "massive errors and provable fraud" in the 3 November 2020 vote in Fulton County, which covers most of the city.

"The news coming out of Georgia is beyond incredible. The hand recount in Fulton County was a total fraud!" Trump wrote. "They stuffed the ballot box — and got caught. We will lose our country if this is allowed to stand."

At a press conference on Wednesday, Favorito said that analysis of scanned images of mail-in ballots showed 923 of 1539 batch files contained incorrectly-reported votes.

One single batch of ballots, with 554 Biden votes and 140 for Trump, was counted as 850 for Biden votes, and zero for Trump.

“Why did someone write in 100-to-nothing, 150-to-nothing and put that in, that was entered into the system and was reported as the official results of the audit?” Favorito asked. “Who these people were, we don’t know. Some were election officials, some were librarians, others were Happy Face personnel” — referring to a private firm hired to count ballots in Fulton County.

Favorito's findings add weight to Trump's claim that he was robbed of the victory in a half-dozen states in last year's election.

© REUTERS / Cheney Orr
Trump Responds to Biden's Criticism of Those Who Doubt Integrity of 2020 Election
Biden was declared the winner in Georgia by less than 12,000 votes — under a quarter of a percent — after counting was halted in the small hours of 4 November, with Trump in the lead, and then continued at an excruciatingly slow pace for weeks after.

Over 1 million of Georgia's 10.7 million inhabitants live in Fulton County.

"In Fulton County the hand recount was wrong by 60%; 100,000 tally sheets for ballots were missing; they duplicated thousands of extra votes for Joe Biden; and fabricated vote counts of 100–0 for Biden, many times!" Trump stated.

"Ballot batch sheets fraudulently showed multiple unanimous 100–0 counts for Biden, as well as 150–0, and 200–0. Are we now in a Third World country? What else will they find once the full forensic audit takes place?" Trump asked.

Trump renewed his attacks on Raffensperger, who recently announced the removal of over 100,000 deceased and non-resident voters from state electoral rolls, for insisting that the presidential election was fair.

"This means Brad Raffensperger certified the 2020 Presidential Election Scam despite it being 'riddled with massive errors and provable fraud'," Trump asserted. "This proves what Suzi Voyles, who worked Fulton elections for decades, suspected, that fraudulent photocopied ballots were counted for Biden."

"Will the Attorney General of Georgia Chris Carr finally act? How has Governor Brian Kemp allowed this to happen?" Trump said. "This is corruption at the highest level. Our Nation is at stake!"