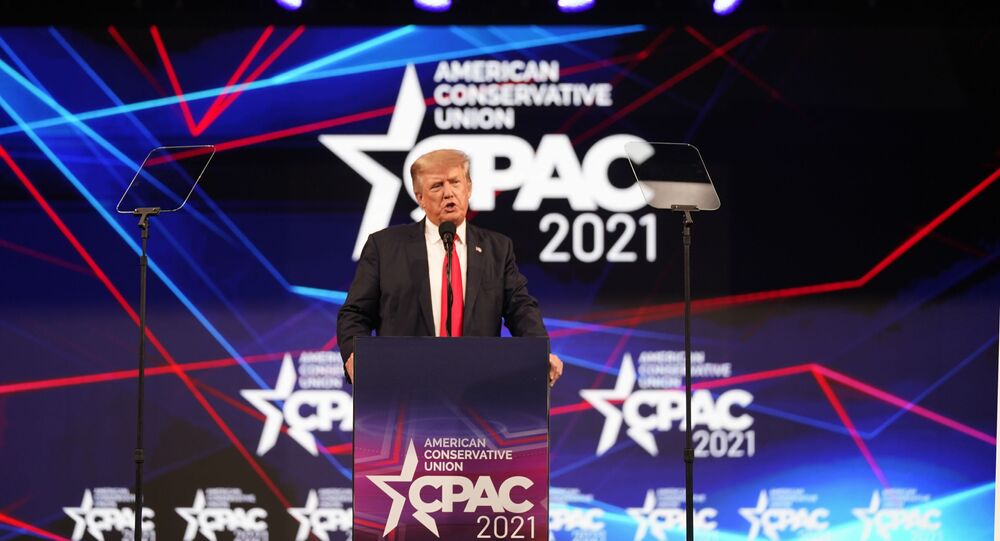 Addressing the Conservative Political Action Conference (CPAC) on Sunday, former President Donald Trump vowed to counter and defeat the left-wing agenda, such as the critical race theory and cancel culture, slammed President Joe Biden's policies, and reaffirmed his accusations that the election was rigged.

A seven-point plan offering how to reinstate ex-POTUS Donald Trump back in the Oval Office “in days, not years” has been circulated at the Conservative Political Action Conference in Dallas this weekend. The plan, urging to “play the Trump card” was first commented on by Forbes political reporter Andrew Solender.

CPAC attendee sent me this pic of a card they were handed about a “7-pt. plan to restore Donald J. Trump in days, not years,” which involves installing Trump as speaker and ousting Biden & Harris. pic.twitter.com/dS0tQ5jW7b

​The journalist went on Twitter, saying that a CPAC attendee on Friday sent him a photo of the card that appears to have been made and distributed by a group called Patriots SOAR. The latter is not believed to be associated with CPAC organisers.

The card offers to “pull back the curtain” on the “horror show” that is the current Democratic Party and expose its “monstrous crimes."

The former president's best hope of reclaiming his position in the White House before the elections of 2024, says the card, is to get placed in the House Speakership post. This would put him third in line in the presidential succession. Trump could then ostensibly ensure the impeaching and removal from office of President Joe Biden and Vice President Kamala Harris.

The card includes a link to a website that contains a much longer online document further elaborating how it can be revealed that Trump “legitimately won the 2020 elections."

At the top of the page, there's a link to a 90-second video. A thumbnail says “YOU can help restore our Commander-in-Chief. (And have fun while doing it!).” There follows a more detailed description of the seven “dominoes” that must be toppled to reinstall Trump.

A crucial aspect of the plan involves ousting Nancy Pelosi as White House speaker, exposing “crimes” that will make her “melt like the Wicked Witch of the West, in the ‘Wizard of Oz.’”

Subsequently, the Congressional Black Caucus and other key groups would “flip” to the GOP from the Democratic Party.

A new House majority claimed by the Republicans would allow them to “reveal suppressed results of existing investigations into election racketeering.” Trump would be announced as having legitimately won the 2020 election.

This is something that Trump has long maintained, insisting that the election was “rigged” against him. Despite his legal team filing lawsuits in states after the November 2020 presidential elections, the effort top overturn the results failed, propelling Democrat Joe Biden into the Oval Office.

The plan, as mentioned earlier in the brief version on the card, claims Trump can be elected speaker of the House and spearhead calls to impeach and remove President Joe Biden and VP Kamala Harris.

The outlined plan would require that Republicans regain control of the House in 2022. This is an agenda that Trump and the GOP have underscored as crucial. The GOP could take control by flipping five seats that are currently held by the Democrats.

Earlier, the US media circulated information that some supporters of the QAnon conspiracy theory were waiting for summer in the hope that a "military coup," will return Trump to power to continue his fight against an alleged “pedophile sex trafficking ring” within the US government.

The lengthy online document from Patriots SOAR makes mention of a certain “fellow countryman, Robert J. Antonellis,” described as an “Author, Investigative-Researcher & Engineer.”
It is not clear what other individuals are associated with Patriots SOAR and there has not been any official comment from the group.

Trump spoke at the conservative gathering in Dallas on Sunday afternoon, vowing to counter and defeat the left-wing agenda, as he lamented President Joe Biden's policies, while complementing the conference's attendees for being "some of the staunchest and fiercest supporters" of "the greatest political movement in the history of our country."

"We will secure our borders, we will stop left wing cancel culture, we will restore free speech and free elections and we will make America great again," Trump said.

Closer to the end of the speech, Trump, as usual, briefly hinted at a possible presidential run, despite saying earlier in the day that he had already decided whether or not to run.