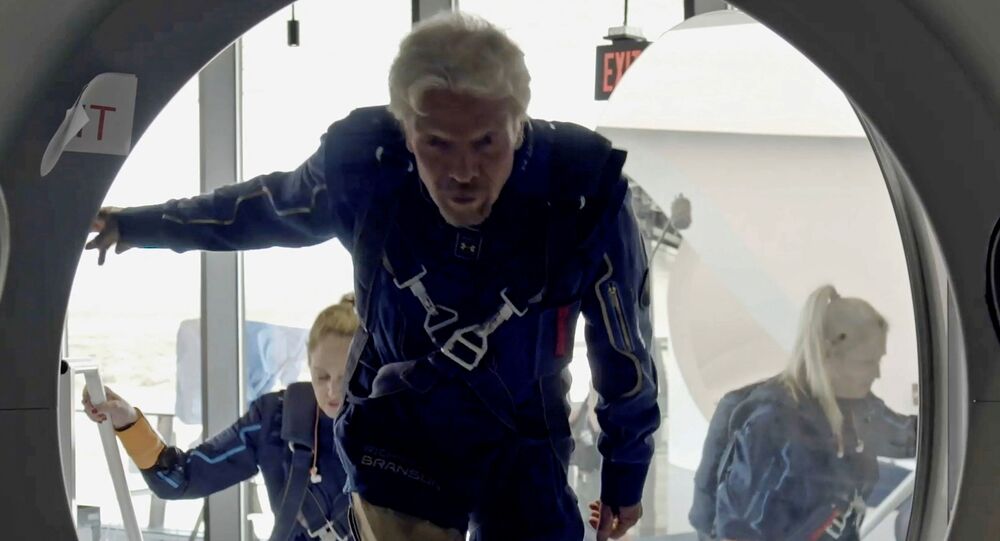 The British founder of the Virgin Group Richard Branson is preparing to experience a few minutes of weightlessness onboard VSS Unity SpaceShipTwo on Sunday, but not everyone thinks he'll actually reach space.

Virgin Galactic's VSS Unity SpaceShipTwo will launch into space from New Mexico on Sunday with British entrepreneur Richard Branson and five others on board. It will be the company’s first fully crewed space flight.

The Unity 22 mission will begin at Virgin Galactic’s operational base at Spaceport America in the New Mexico desert. Branson’s space plane will be hauled into the clouds by VMS Eve, a massive twin-fuselage mothership, to an altitude of 50,000 feet. The carrier will then drop suborbital space plane Unity, which will fire up its rockets and send the billionaire and other passengers into space. Branson will be joined by two pilots Dave Mackay and Michael Masucci, and a team of specialists comprising Vice President of Government Affairs and Research Operations Sirisha Bandla, Chief Astronaut Instructor Beth Moses, and Lead Operations Engineer Colin Bennett.

The crew is expected to reach an altitude of 89 km, where they will experience a few minutes of weightlessness before heading back home.

For NASA and the Federal Aviation Administration (FAA) anything beyond 80 km from Earth’s surface is considered space but those working for Jeff Bezos’ rival Blue Origin company disagree. According to infographics recently published by the aerospace giant, Branson’s journey will not be internationally recognised as a “space flight” as Unity will not cross the so-called Kármán line just beyond an altitude of 100 km. Apparently "96 percent of the world's population" (including Bezos) believe space starts at this point.

The Amazon founder was the first billionaire to announce his space aspirations in May, setting the date for his company’s first crewed flight on 20 July. He's expected to take Blue Origin’s New Shepard craft into space accompanied by his brother Mark, 82-year-old aviator Wally Funk, and a yet to be revealed charity auction winner nine days after Branson, who announced his own space plans several weeks after Bezos. According to the Virgin Group’s founder, it's not a (space) race.

Branson’s launch will be livestreamed from the New Mexico desert and presented by American comedian Stephen Colbert, among others. You can watch the highly-anticipated launch on Sputnik.