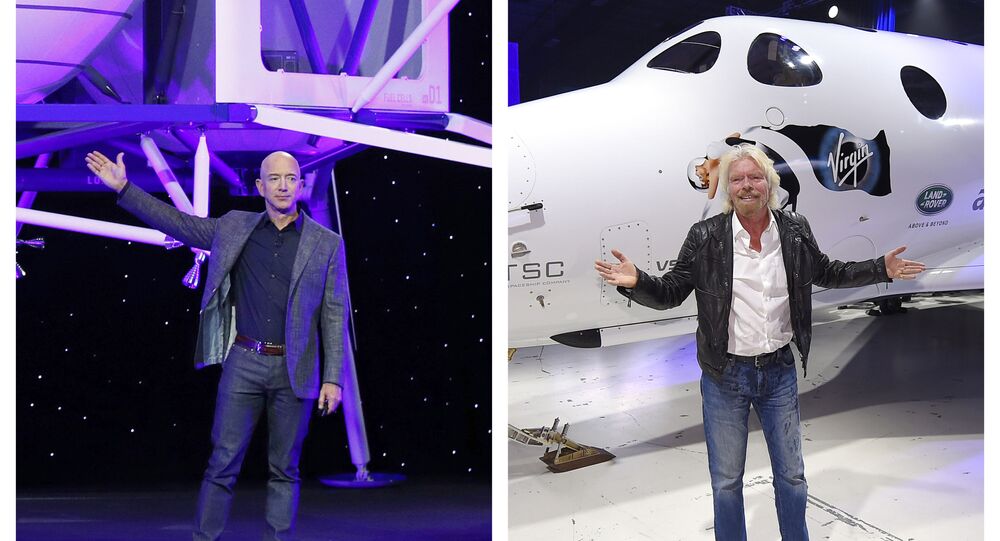 British business magnate Richard Branson announced last week that he will be on board Virgin Galactic’s spacecraft as it makes the first fully crewed flight into the unknown on 11 July – nine days before Amazon founder Jeff Bezos will undertake his own space journey. But who will reach space first?

Jeff Bezos may not become the world’s first billionaire to fly into space but he's hellbent on making sure his flight is the only one that counts, technically speaking.

Bezos’ Blue Origin company tweeted a new infographic suggesting that Virgin Galactic's Unity space plane – that will take Richard Branson and five other passengers beyond Earth's atmosphere on 11 July – should not be considered a “space” flight because it won't cross the so-called Kármán line.

Branson is set to travel 89 km above the New Mexico desert. The Federal Aviation Administration (FAA) and NASA are among those who believe that anything beyond 80 km from Earth's surface is considered space.

But according to Blue Origin, this is still not far enough to reach the 'real' boundaries of space.

Unlike Branson, Bezos’ New Shepard launch vehicle will make sure there's no ambiguity about its journey into the unknown, the company hinted on Twitter; Blue Origin argues that it is majorly believed that only flights venturing beyond 100 km from Earth breach space. Bezos is hoping to send tourists to these dizzy heights soon.

“From the beginning, New Shepard was designed to fly above the Kármán line so none of our astronauts have an asterisk next to their name. For 96% of the world’s population, space begins 100 km up at the internationally recognised Kármán line,” Blue Origin said.

Only 4% of the world recognises a lower limit of 80 km or 50 miles as the beginning of space. New Shepard flies above both boundaries. One of the many benefits of flying with Blue Origin. pic.twitter.com/4EAzMfCmYT

​The altitude is just one of the things Blue Origin picked on when making comparisons to Virgin Galactic; Bezos’ ship has the “largest windows in space” (Branson only has “airplane-sized windows”), a “minimal” ozone layer impact, and an escape system. Blue Origin also claims it has a more convincing history of “safe flights."

However, Bezos’ aerospace giant didn’t mention that it will be Virgin’s fourth crewed mission beyond Earth’s atmosphere (albeit the first fully crewed one) – Blue Origin is blasting off into space with a team for the first time. And Bezos, alongside his brother Mark, 82-year-old aviator Wally Funk, and a soon to be revealed charity auction winner will be the first to board New Shepard for its first 'internationally recognised' crewed space flight on 20 July.

Branson, who announced his desire to fly into space on 1 July, many weeks after Bezos revealed his own plans, said he's not in competition with the Amazon founder...

"It's honestly not a race," Branson earlier told Reuters. "If it's a race, it's a race to produce wonderful spaceships that can make many more people be able to access space. And I think that's both of our aims."

In the meantime, 600 people have already reserved a ticket worth around $250,000 to fly into space with Branson's company including the likes of Tom Hanks, Brad Pitt, Lady Gaga, Angelina Jolie, and Justin Bieber.