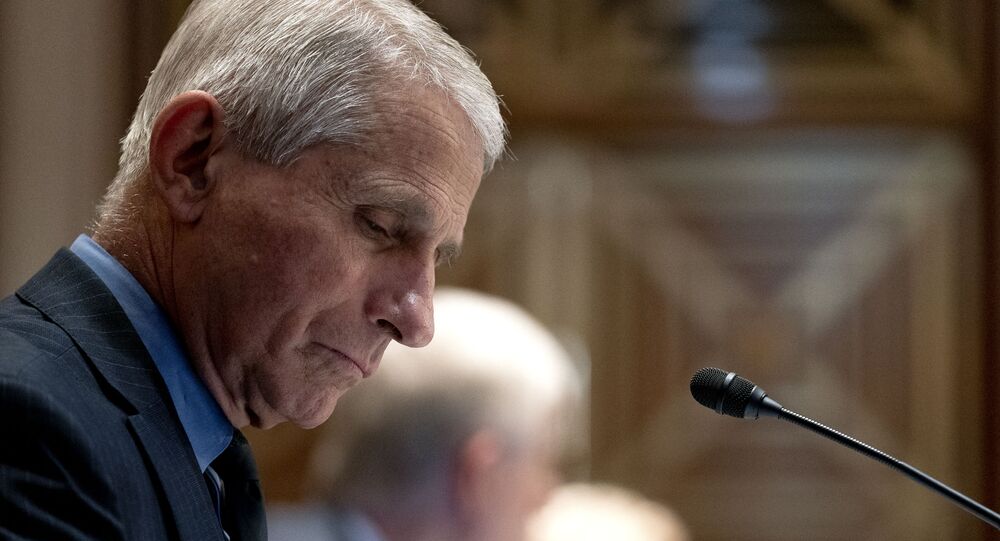 The chief medical advisor to the president and oft-cited senior authority on Sars-CoV-2 has come under increasing scrutiny from Republican lawmakers after leaked emails appeared to have revealed his alleged role in the funding of potentially dangerous coronavirus research at the Wuhan Institute of Virology years before the COVID-19 pandemic began.

The Republican-organised select subcommittee on the coronavirus crisis plans to stage an "expert witness forum" on the pandemic’s origins, and has asked to interview Dr. Anthony Fauci as part of the proceedings, the Daily Caller reports.

The conservative outlet says the subcommittee, led by Representative Steve Scalise and House committee on oversight and reform ranking member James Comer, plans to hold three separate meetings, including two witness panels and congressional panel, and has invited nearly a dozen high-profile officials to testify, Fauci among them.

The first panel is expected to include Trump-era Assistant Secretary for Health Brett Giroir, Hudson Institute fellow Dr. David Asher, who was named in emails on interagency infighting about Covid’s origins, and doctors Richard Muller and Steven Quay, who recently touted the man-made virus allegations in the Wall Street Journal and elsewhere.

Along with Fauci, Francis Collins, the director of the National Institutes of Health, and health and human services science advisor David Hassell have so far refused to accept the coronavirus subcommittee’s invitation, according to DC’s information. Hassell was recently grilled by representatives Jim Jordan and Mike Gallagher about the apparent lack of oversight amid evidence that US grant money was sent to the Wuhan lab for potentially-dangerous coronavirus bat research between 2014 and 2019.

Fauci’s image among Democratic officials as an unimpeachable authority on SARS-CoV-2 who "stood up to" Donald Trump and his claims that the coronavirus may have been created in a lab was tarnished after Buzzfeed News published a massive trove of emails which revealed, among other things, that the doctor attacked the Trump/Republican theory in public while privately admitting it to be a possibility because the virus’s genetic code was “inconsistent with expectations from evolutionary theory.”

In one exchange, Dr. Peter Daszak, the head of EcoHealth Alliance – a non-profit pumping millions of dollars in National Institutes of Health grant money to the Wuhan lab – thanked Fauci for rejecting the lab leak theory. The email was heavily redacted, with media speculating that either Fauci, Daszak or both may be under criminal investigation.

Some emails reportedly also showed Fauci attempting to distance himself from gain-of-function research after the pandemic began after spending years supporting it.

The emails also showed that Facebook CEO Mark Zuckerberg had asked Fauci for help in the formation of a "correct" narrative in relation to Covid-related "conspiracy theories."

Republicans have called on Fauci to resign over the leaked emails, and have accused Democrats of seeking to “create diversions” to “cover up” the scientist’s possible role in causing the pandemic.

Last week, lawmakers said it was “imperative” that Fauci appear and testify before their committees to get to the bottom of things.

Fauci has dismissed criticism over the email leak and his public back-and-forth vacillations on whether Covid-19 originated in a lab, referring to himself in the third person in an interview with the New York Times on Monday and suggesting that “a guy whose entire life has been devoted to saving lives” is now being compared to “Hitler.”

Following the emails’ publication, Republican Senator Rand Paul, a former medical doctor by trade, accused Fauci of bearing “moral culpability” for the pandemic, and said that at least $600,000 in NIH funding approved by Fauci was used for gain-of-function research at the Wuhan lab.

© REUTERS / NIAID-RML
Swedish State TV Reporter Claims She Was Forced to Stop Researching COVID-19 Lab Theory
The US and China spent much of 2020 accusing one another of responsibility for the global coronavirus crisis, but the back-and-forth claims began to weaken amid media investigations on Western scientists’ heavy involvement in funding, participating in and assisting the research taking place at Wuhan.

Last month, for reasons which are not yet entirely clear, the Biden administration began to advance the man-made virus claims once touted by Trump, and gave the US intelligence community three months to come up with a comprehensive report on the matter. Before that, Democrats largely dismissed the manmade virus claims as a conspiracy theory.

China has long denied the allegation that Sars-CoV-2 was created at the Wuhan lab, and accused Trump and Biden of making the claims as part of a wider campaign of pressure against China. The World Health Organisation (WHO) conducted an inspection in Wuhan earlier this year, concluding that there were four possible causes of the pandemic, with the lab leak theory being an “extremely unlikely” possibility.