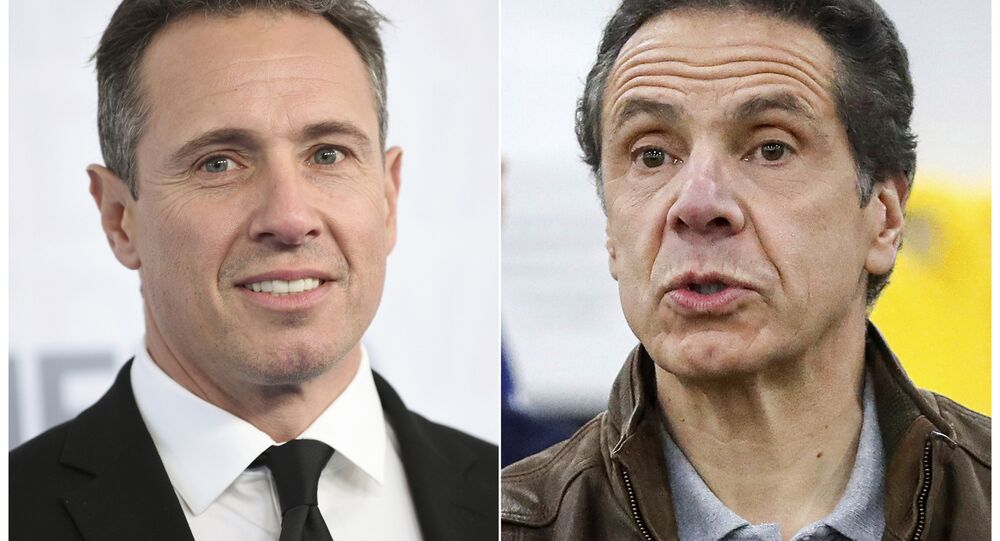 New York Governor Andrew Cuomo, who has been battling sexual assault claims, earlier this year held a series of phone conferences with his younger brother Chris, a prominent CNN anchor, to get advice on how to fight off the accusations.

CNN is under fire for failing to punish key presenter Chris Cuomo after it was revealed that he had coached his scandal-ridden brother, Andrew Cuomo, on how to respond to the latter's sexual misconduct allegations.

The Washington Post reported in May that the ‘Cuomo Prime Time’ anchor held a series of conference calls with the governor, his top aide and communications team this year, advising his brother not to resign amid a flurry of claims that Cuomo’s behaviour towards current and former staffers had been inappropriate.

Following the report, Chris Cuomo, one of the network’s top stars, apologised for his “mistake” of getting involved in the matter with his brother even as his employer has been extensively covering the sexual harassment scandal.

"I can be objective about just about any topic, but not about my family,” he said in May, noting that he has been facing a "unique challenge” when having to balance his journalistic integrity and his brother’s power position.

“Being a journalist and a brother to a politician is… a unique challenge, and I have a unique responsibility to balance those roles,” says @ChrisCuomo regarding reports that he offered advice to his brother, New York Gov. Andrew Cuomo. “It was a mistake.” pic.twitter.com/P0GkglgrYM

​There has a been no public punishment or reprimand for Chris Cuomo from his employer. Meanwhile, a number of CNN staffers, including prominent hosts Jake Tapper and Brian Stelter, described the governor's brother's actions as inappropriate and have suggested that the anchor take a leave of absence.

According to The Hill, the media channel’s president, Jeff Zucker, was heavily grilled by his employees during last week’s town hall meeting, as CNN staffers remain puzzled regarding why the host did not get see punishment for his transgression.

Zucker allegedly responded by saying that punishing Cuomo would have been pointless. He also noted that the channel did not have any rules that specifically addressed a situation described as “very unique”.

A former CNN ethics executive, Steve Holmes, agreed, noting that there are no “rules that are etched in stone so that a violation could be a firing offense.”

“I mean the Chris Cuomo thing, they can't say that he's violated any written policies because there aren't any, period,” Holmes told the Hill. Meanwhile, he still believes that inaction in the situation was sending a wrong signal to staffers.

Andrew Cuomo has been battling a barrage of sexual assault and misconduct accusations since last year, after former aide Lindsay Boylan claimed that the governor has been sexually harassing her “for years”. Several other accusers later came forward to corroborate her story.