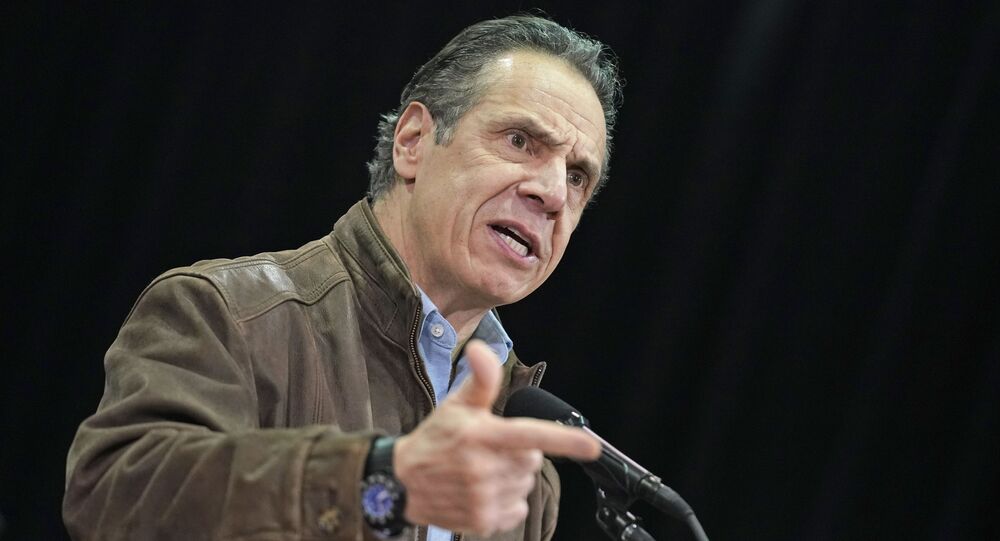 The Democrat is now facing two investigations – the first one over his state's coronavirus policy, which critics say led to an increase of deaths, and the second will look into allegations of sexual harassment and inappropriate behaviour made by women who worked with him.

New York Governor Andrew Cuomo has signalled that he won't give in to numerous calls for him to resign. At a recent public event, where the official urged New Yorkers to get coronavirus jabs and called on more houses of worship to be turned into vaccination sites, one of his supporters declared love for the 63-year-old Democrat and urged him not to quit.

"We love you, we need you at the finish line, you better stay", the woman said as Cuomo got in the car.

"This person is no longer in a capacity to lead and to govern the state of New York, where we still have an ongoing pandemic. There is a crisis going on and we are trying to roll out vaccines and there are so many other issues, including not the least of which [is] a state budget for the fiscal year beginning in less than two weeks", John Liu said.

Liu is one of many Democratic and Republican legislators, who have called on Cuomo to step down.

What are the Allegations?

At the end of February, former aide Lindsey Boylan published an essay, where she described Cuomo's alleged inappropriate actions and comments. Boylan, who worked in New York's economic development agency for several years, claimed the governor invited her to play strip poker when they were flying on his private jet and touched her legs, arms, and lower back without her consent. The 36-year-old said she decided to resign after Cuomo purportedly kissed her on the lips in 2018.

Since then seven other women have come forward with allegations, each of them accusing the politician of sexual harassment or inappropriate behaviour.

The most serious accusation against Cuomo was made by a current aide, who claimed the official groped her breast in the Executive Mansion. The woman reportedly wished to remain anonymous.

"She froze when he started doing that stuff to her. But who are you going to tell", said Alyssa McGrath, a colleague of the accuser.

McGrath, who herself accused the governor of sexual harassment, revealed that Cuomo then asked the unidentified aide not to tell anyone about the purported incident.

The governor has categorically denied all accusations and ordered an independent inquiry into the allegations. He admitted tough that his behaviour could have been interpreted as "an unwanted flirtation". Despite widespread criticism from citizens and fellow colleagues, the Democrat refused to step down.

Besides sexual harassment allegations, Andrew Cuomo is facing an investigation into his state's policy on coronavirus and allegations of bullying. Two weeks ago, the New York State Assembly launched an impeachment probe against Cuomo after it became known that his office purportedly covered up the real number of coronavirus-related deaths in nursing homes in the state. New York Attorney General Letitia James estimates that the number of fatalities may have reached over 13,000, far above the 8,711 officially reported.

Cuomo and his aides deny they deliberately covered up the extent of coronavirus deaths in nursing homes and said they counted fatalities differently.
The governor is also accused of bullying by other officials. New York Assemblyman Ron Kim claimed Cuomo called him and vowed to destroy his career after he criticised him over his coronavirus policy.