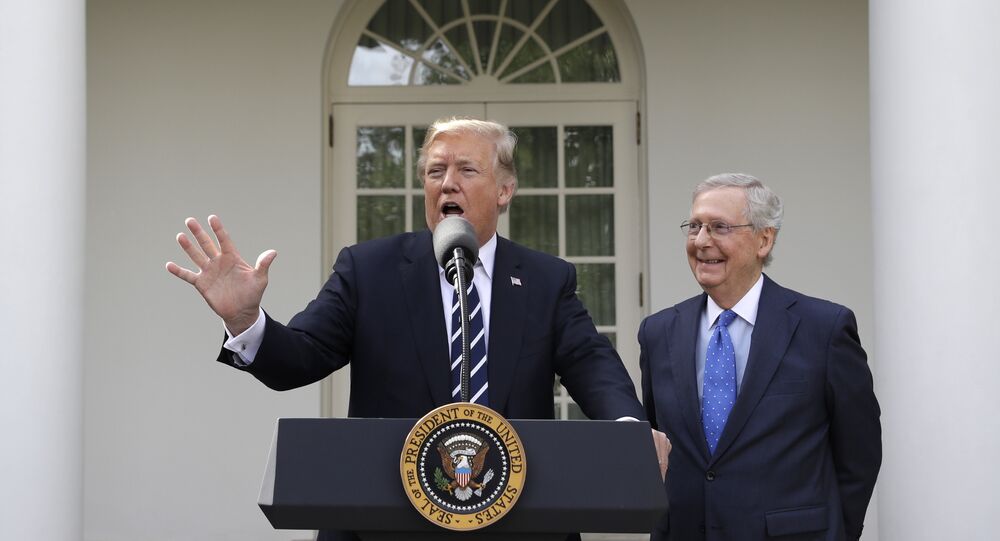 Ex-President Donald Trump levelled a broadside at Senate Minority Leader Mitch McConnell, slamming him as a “dumb son of a b*tch” for failing to do more to overturn the results of the 2020 election, as he adressed members of the Republican National Committee (RNC) at his private Mar-a-Lago resort in Florida, reported The Washington Post earlier.

Illinois Congressman Adam Kinzinger has excoriated the former POTUS for his remarks reportedly targeting Senate Minority Leader Mitch McConnell at a Republican National Committee (RNC) gathering at his Mar-a-Lago Club over the weekend.

One of 10 Republicans who joined House Democrats in voting to impeach Donald Trump in January for "incitement of insurrection" in connection with the 6 January riot at the US Capitol went on Twitter on Saturday night to slam Trump’s ‘classy as always’ diatribe against McConnell.

Classy as always. I remember when my fellow Republicans would have condemned this stuff but, that was a whole 4 years ago. https://t.co/U2pCNIImGt

​Kinzinger's post was prompted by statements made by the former president while speaking to a Republican National Committee (RNC) gathering of donors at his Mar-a-Lago Club in Palm Beach, Florida.

As Trump recounted claims the 2020 presidential election had been was stolen from him and ‘rigged’ to favour Democrat Joe Biden, he levelled scathing criticism toward McConnell, reported The Washington Post.

The former president called McConnell a "dumb son of a b*tch" and a "stone cold loser” for not putting in an effort to overturn the results of the 2020 election, according to the outlet.

“If that were Schumer instead of this dumb son of a b*tch Mitch McConnell, they would never allow it to happen. They would have fought it,” Trump told attendees, according to the outlet, referring to Senate Majority Leader Charles Schumer (D-N.Y.).

The 45th President of the US had lambasted the Republican lawmakers who voted in favour of his second impeachment following the January 6 Capitol riot, as the event in Florida focused on unity within the GOP and upcoming campaign plans.

Party leaders have been wooing GOP donors with their plans to win back the House and Senate in 2022 and the White House in 2024.

JONATHAN ERNST
U.S. Senate Minority Leader Mitch McConnell (R-KY) walks outside the Senate Chamber during a break in the opening day of the impeachment trial of former U.S. President Donald Trump, on charges of inciting the deadly attack on the U.S. Capitol, on Capitol Hill in Washington, U.S., February 9, 2021.

Refusing to directly weigh in on the verbal attack on McConnell by Trump, Sen. John Thune (S.D.), the Senate's No. 2 Republican, urged Republicans to embrace party unity.

Speaking on "Fox News Sunday", Thune said on Sunday that such rhetoric was just "part of the style and tone that comes with the former president".

Tensions between former allies Trump and McConnell have been heating up since the longest-serving Senate Republican Leader in US history directly blamed the former president for ‘fomenting’ the events at the Capitol on 6 January.

Although he voted in the Senate to acquit Trump, he sharply criticized his former ally in a speech on the Senate floor, insisting that rioters had been "fed wild falsehoods by the most powerful man on Earth. Because he was angry he'd lost an election."

"The Republican Party can never again be respected or strong with political "leaders" like Sen. Mitch McConnell at its helm. McConnell's dedication to business as usual, status quo policies, together with his lack of political insight, wisdom, skill, and personality, has rapidly driven him from Majority Leader to Minority Leader, and it will only get worse," Trump said in a statement on 16 February, where he also blamed McConnell for Republicans' losing two key Senate seats in a special election in Georgia.

Currently, Trump and McConnell are Trump are already set to face off in at least one Senate primary contest.

Donald Trump, who earlier vowed to take out his opponents in next year's GOP primary races, has pledged to campaign against Alaska Sen. Lisa Murkowksi, who had voted to convict Trump in the second impeachment trial.

The Senate Leadership Fund (SLF), a super PAC run by allies of Senate Minority Leader Mitch McConnell, earlier announced it will support Alaska Sen. Lisa Murkowski in her reelection campaign. This sets up a clash between the group and GOP candidate Kelly Tshibaka.

"Tshibaka will also campaign as a strong opponent to illegal immigration, a staunch defender of the Second Amendment and an advocate for the military. Her campaign also called her 'unapologetically pro-life.'"https://t.co/myCGdUdiKO

​Donald Trump himself has stopped short of explicitly acknowledging he may or may not run again, with the ex-president teasing a potential run while speaking ‘off-script’ at the GOP donor event on the weekend, according to Bloomberg.