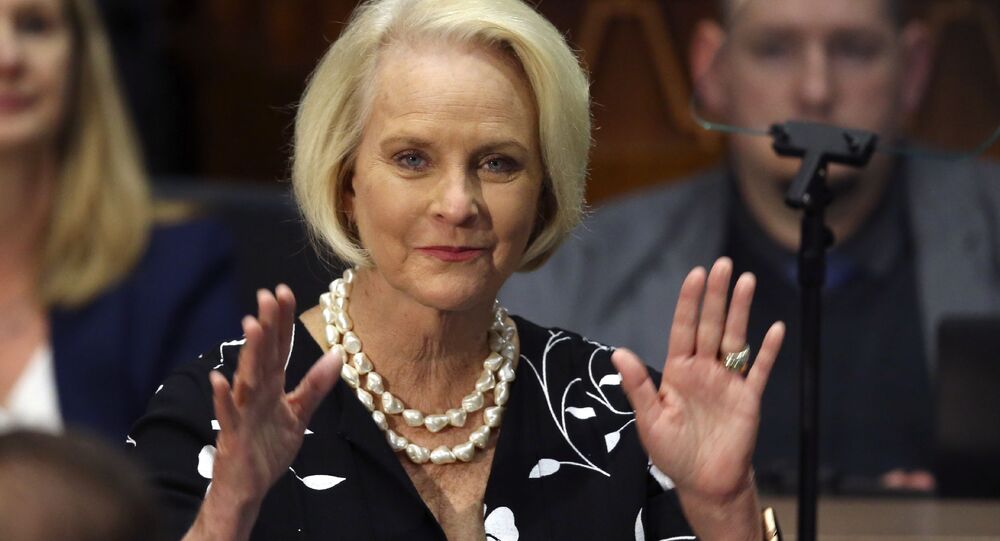 The wife of late Senator John McCain, a fierce critic of Donald Trump, believes it is of paramount importance to “overcome” a possible split, as otherwise the GOP “is dead”.

Cindy McCain, the widow of the late Republican Senator for Arizona John McCain, has said in a sit-down with CBS News’ Sunday Morning that the chances are there will be a split within the GOP over the role former President Donald Trump will play in the future.

"We have got to overcome this. We have to. Not just as a party. But as a country. We cannot allow this", McCain warned, continuing still further:

"I know something's going to happen. I know that much", she said. "Or our party's dead if we don't".

But McCain, whose husband openly clashed with Donald Trump before his death from cancer in 2018, came up with a rather optimistic forecast for the moderate wing of the GOP, saying it would definitely enjoy a comeback:

"Our side, it's swung way to the right. It'll come back. It'll come back", she remarked upliftingly. During the latest election and preceding campaigns, she herself endorsed Democrat Joe Biden, being at one point reportedly censured by the Arizona Republican Party due to her not seeing eye to eye with Trump.

Cindy McCain has of late been joined by a number of prominent Republicans who have increasingly come down on the ex-POTUS in the wake of the 6 January attack on Capitol Hill.

Senate Minority Leader Mitch McConnell, a Kentucky Republican, has denounced Trump, expressing hope that he will be expelled from the party moving forward. Representative Liz Cheney, a Wyoming Republican, has also called out Trump, thundering that he should by no means have a role in the party.

10 House Republicans, including Cheney, voted with Democrats to impeach Trump a second time after the storming of the Capitol. Although Trump was ultimately acquitted at the end of his Senate trial, seven Republican senators voted "guilty" alongside all 50 members of the Democratic Caucus.

However, polls suggest that the majority of the Republican electorate is still loyal to Trump, who was earlier this month cleared of all the charges brought against him by the Democrats over the Capitol siege.

Also, the prominent Conservative Political Action Conference (CPAC) slated for this week will feature Trump and a number of his supporters.

Politico reported in late January that the Republican National Committee is likewise planning to invite Trump to its donor meeting in spring, despite the division in the party's ranks over the ex-president’s political future.

Some time ago, he reportedly mulled a comeback, even voicing plans to set up a third political party - the Patriot Party, which would fracture the GOP establishment, political analysts warned. Whatever the case, if he does run for the Oval Office again, the party will remain neutral, RNC chairwoman Ronna McDaniel said.

Trump himself is believed to be looking to cement his power and ambitions, as follows from Save America PA’s readout of Thursday’s meeting with Republican House Minority Leader Kevin McCarthy at Mar-a-Lago.

“President Trump's popularity has never been stronger than it is today, and his endorsement means more than perhaps any endorsement at any time”, it says.

In the meantime, there are reports claiming the lack of support by some Republicans would also play a role, as a number of GOP members are ostensibly considering forming a centre-right breakaway party to avoid Trump’s impact, Reuters reported on Thursday, citing four people familiar with the talks.

Among those weighing such an option are reportedly former Republican officials and strategists from the Reagan, George H.W. Bush, George W. Bush, and even Trump administrations. About 120 are believed to have attended a Zoom conference call last Friday to negotiate the breakaway group, which is expected to be based upon "principled conservatism", including adherence to the Constitution and the rule of law. They claim, citing Trump’s Stop the Steal rallies and rioters' subsequent assault on the legislature, that Trump has undermined US democracy by departing from these tenets.

As Reuters reported, some of the attendees were considering setting up a "faction" that would operate either inside the current Republican Party or outside of it, as many admit that third parties fail.