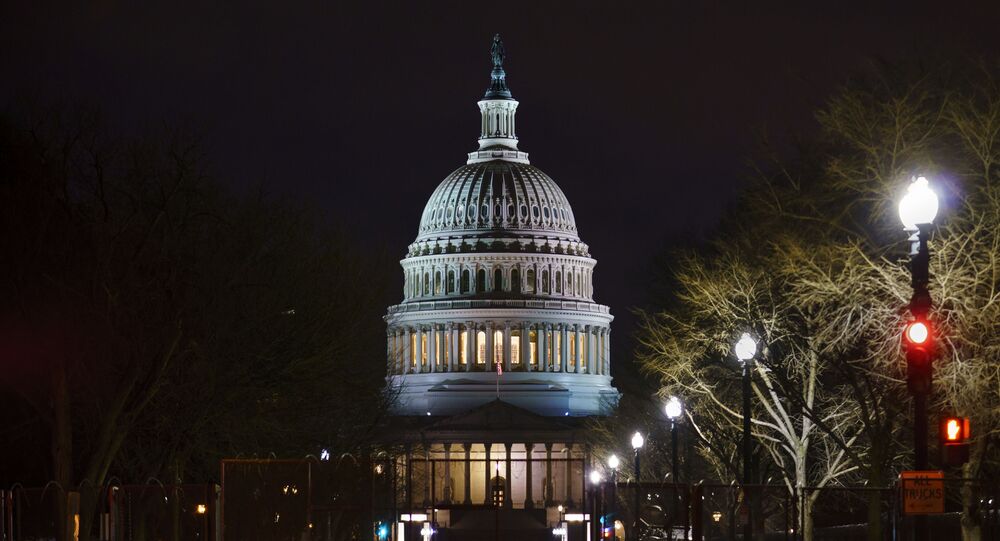 Donald Trump has repeatedly rejected having any responsibility for the 6 January Capitol violence, with his legal defence team claiming that the impeachment trial against the former US president is unconstitutional.

Fox News has cited an unnamed senior impeachment aide as saying that the inclusion of a fake blue verification check mark on tweets presented at the Senate trial of former US President Donald Trump was an accident.

"The final graphic accidentally had a blue verification check mark on it, but the substance of it was entirely accurate", the aide noted.

They added, however, that "if anything, it is further evidence of [former] President Trump's attention to and knowledge of what was being openly planned on January 6 by his followers, even those without Twitter verifications".

The second impeachment proceedings against the ex-POTUS are currently underway, with Democrats accusing Trump of inciting violence during the 6 January events, when his supporters besieged the US Capitol in Washington, DC, in an attempt to stop Congress from certifying the 3 November election results.

The impeachment aide's comments came a few days after Jennifer Lynn Lawrence, a Trump supporter, tweeted that she wonders why her tweet used "in the fact-free impeachment" includes "a verification badge" given that she has "never been verified on Twitter".

The tweet followed Lawrence rejecting Democratic impeachment manager Eric Swalwell's implication that she meant to bring troops to the Capitol.

I've never been verified on Twitter so why did my Tweet used in the fact-free impeachment include a verification badge? I’m assuming Democrats faked it like they are faking the whole case. @RepSwalwell why did you add a verified badge to my tweet in your presentation? pic.twitter.com/9Ww0TLveNA

"I don't do horses ok (I'm from New York). I'm not in the army either so the use of the word cavalry would have been pretty stupid. It's a wonder Congressman Swalwell didn't pick up on it", Lawrence pointed out in an open letter.

She was apparently referring to Swalwell mispronouncing the word calvary used in Lawrence's previous tweet shared by the impeachment manager during the Trump trial earlier this week.

"It has been an honor to stand up and fight for you and our nation. We will be standing strong on Jan 6th in DC with you. We are bringing the Calvary, Mr. President", the tweet reads.

Lawrence told the news outlet Just the News that she deliberately chose "Calvary" (an area in Jerusalem where Jesus Christ was crucified) for her tweet and that she was referring to a prayer vigil.

© AFP 2021 / ALEX EDELMAN
Democratic Senator Urges to Halt Impeachment Trial Over New Reports About Trump-McCarthy Call
"That's exactly what I meant. I did not mean we were bringing the cavalry. I wasn't going to hop on horseback and come riding into D.C. with my horses and my cavalry. ... And you know what we did on January 5? We held a prayer event at Freedom Plaza, and we prayed, and we brought Jesus Christ back into Washington, D.C.", she added.

The first day of the former president's second impeachment trial resulted in a 56-44 vote that found the proceedings were constitutional and should therefore continue.

Trump is facing charges that he incited an "insurrection" before his supporters stormed the Capitol building on 6 January, an accusation that the former US president has repeatedly rejected.