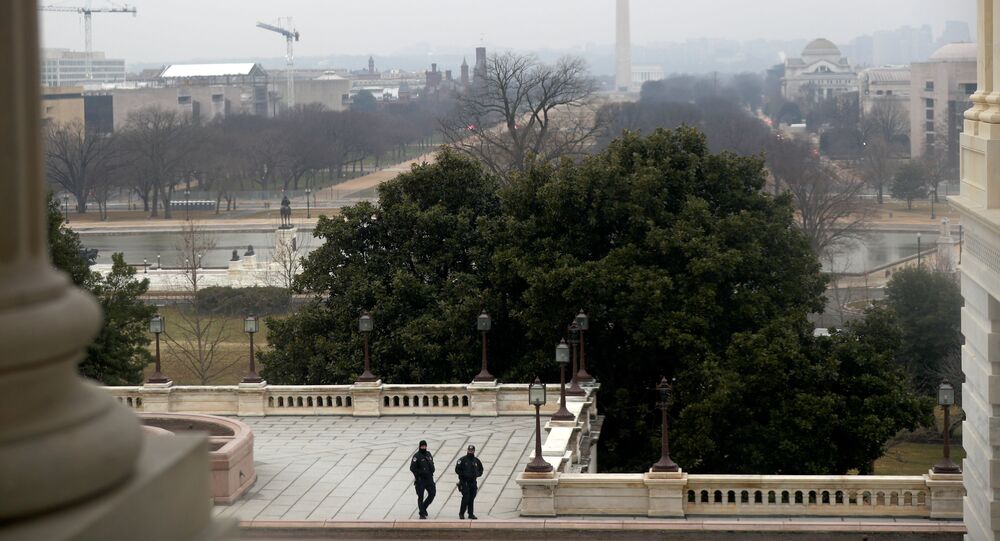 On 13 January, the US House of Representatives voted to impeach now former US President Donald Trump for a second time following allegations from both Democrats and some Republicans that his claims of "mass election fraud" had incited supporters to storm the Capitol. The aforemetioned siege resulted in five deaths.

On 9 February, the first day of the second impeachment trial in the Senate ended with a 56-44 vote to acknowledge the process to prosecute the now former president is constitutional.

On Tuesday, during his opening address, Trump's lawyer David Schoen underlined that the impeachment is nothing but a "chance by a group of partisan politicians seeking to eliminate Donald Trump from the American political scene and seeking to disenfranchise 74 million plus American voters".

In turn, prosecutors used video "evidence" to prove that Trump was guilty of encouraging protesters to storm the Capitol.

The impeachment managers and Trump's legal team were given 16 hours each to present their arguments in the Senate. On Wednesday and Thursday, impeachment supporters, including congressmen Jamie Raskin, Ted Lieu, Joaquin Castro, Diana DeGette, and Joe Neguse took the floor, claiming that the rioters believed they were influenced by Donald Trump and his pre-rally speech.

Democratic representative and and impeachment manager Ted Lieu on Thursday claimed that Trump has a "lack of remorse" about allegedly inciting the Capitol riot. He argued that he could see it as "former prosecutor".

"I'm a former prosecutor, and we're trained to recognise lack of remorse. But it doesn't take a prosecutor to understand that President Trump was not showing remorse. He was showing defiance", Lieu said.

According to Lieu, the fact that Trump used phrases like "We love you" and "You're very special" in a video where he belatedly called upon his supporters not to use violence and leave the Capitol building, indicates that Trump sided with the violent demonstrators.

© Photo : Twitter / @therecount
Screenshot from the security footage of the deadly 6 January Capitol breach shown at the second day of Trump impeachment trial

Democratic representative and impeachment prosecutor Diana DeGette recalled rioters who said they came to the Capitol due to an appeal by Trump. She presented videos from the deadly 6 January riots with protesters screaming "We're fighting for Trump!" and "We were invited by the president of the United States".

"As more and more of these people have been charged, the confession and the regret simply cascades. More and more insurrectionists are admitting that they came at Trump's direction", she said.

House impeachment manager Rep. Diana DeGette on Capitol insurrectionists: "It wasn't just that they were doing this for Mr. Trump—they were following his instructions." https://t.co/cW8E5kPidQ pic.twitter.com/uH9i7xAP9X

According to the prosecution, Trump could provoke further violence. In opposition to Trump's lawyers, who earlier referred to the meaninglessness of the proceedings, congressman Joe Neguse noted that the former president could have foreseen the violence of 6 January because local officials and law enforcement had expressed concern about potential unrest on the day of the pro-Trump rally in Washington.

"When President Trump stood up at that podium on January 6, he knew that many in that crowd were inflamed, were armed, were ready for violence. There can be no doubt that the risk of violence was foreseeable", he said.

The evidence is clear, and it is overwhelming.

We humbly ask that he be held accountable. Because if he is not, who's to say it won't happen again? pic.twitter.com/50h4CpRBeG

Congressman and lead impeachment manager Jamie Raskin also doubted that Trump "would stop inciting violence" if the Senate refused to convict him. "Would you bet the lives of more police officers on that? Would you bet the safety of your family on that?", he asked.

During his time on the floor Raskin stated that the former president's stance on the 2020 presidential elections was an attack on free speech and democracy because the rioters intention was to disrupt the certification of the Electoral College voting. His statement came after earlier claims by Trump's defence team that his speech on 6 January was protected by the first amendment.

"The First Amendment does not create some superpower immunity from impeachment", Raskin claimed.

Raskin reminds senators that an impeachment trial *is not* a criminal trial -- a distinction defenders of Trump frequently conflate pic.twitter.com/nklTW6IZoa

Arguments by Trump's legal team are expected to start tomorrow. According to The Wall Street Journal, his lawyers plan to use only one day to present their case. Trump's defence team earlier noted that they don't intend to use all 16 hours given to them.

After the arguments conclude, senators will have the opportunity to ask both sides questions and interview witnesses, but it's yet unknown whether any have been invited. The final vote about convicting the ex-president is expected to be held this weekend. A two-thirds majority with at least 17 Republicans is required in the evenly split Senate to find Trump guilty.