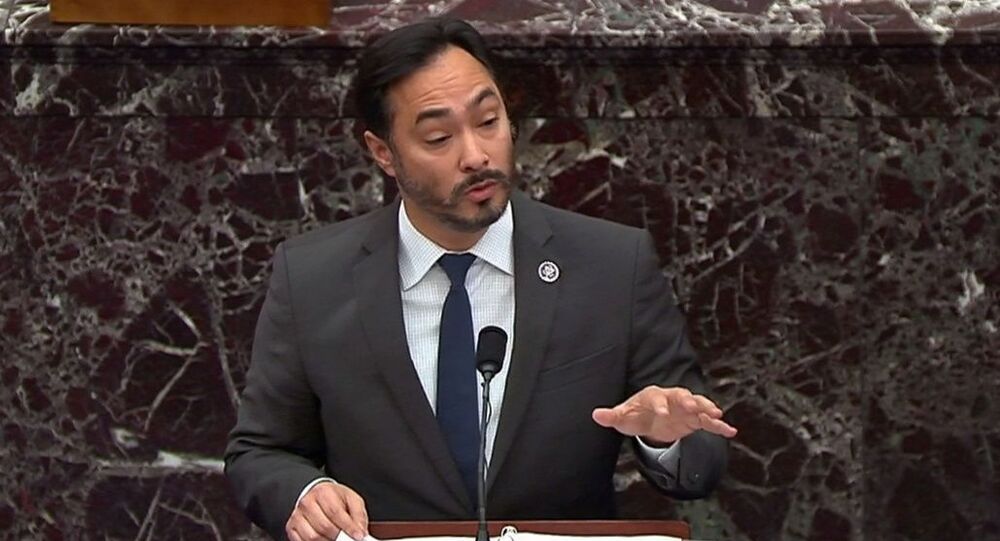 WASHINGTON (Sputnik) - US House impeachment manager Joaquin Castro told the US Senate on Thursday that foreign spies may have infiltrated the Capitol building or conspired with President Donald Trump’s supporters during last month's deadly riot.

"We can’t be certain if and how many foreign spies infiltrated this building or at least coordinated with those who did," Castro said in his speech at the impeachment trial.

He repeated allegations that one of the attackers intended to send a computer device stolen from House Speaker Nancy Pelosi to a friend in Russia, who then planned to sell it to SVR, Russia’s foreign intelligence service.

"Our intelligence agencies and law enforcement agencies have the burden to figure out exactly what was stolen, taken, ransacked and compromised... These investigations are necessary now because of the actions of President Trump," Castro said.

.@JoaquinCastrotx on why this trial is bigger than any one of us: “America is not only a nation, but also an idea. It’s the light that gives hope to people.” pic.twitter.com/Ogeve0d78x

The congressman added that the assault exposed vulnerabilities of the Capitol.

"Think about it. Every foreign adversary considering [an] attack on this building got to watch a dress rehearsal. And they saw that this Capitol could be overtaken," Castro said.

The attack also damaged US international standing, he noted.

"Russian, Iranian, and Chinese influence actors have seized the opportunity to amplify narratives in furtherance of their policy interest," the congressman said, citing a January 14 State Department threat assessment.

"They are using President Trump’s incitement to an insurrection to declare that democracy is over... We cannot let them use what happened on January 6 to define us, who we are, and what we stand for. We get to define ourselves by how we respond to the attack of January 6," Castro said, adding that even US allies were "speaking up" after the Capitol violence.

House impeachment managers, who are acting as prosecutors, are wrapping up their presentation of the case at the Senate for Trump’s conviction on charges of "incitement of insurrection". The allegations were denied by Trump and his lawyers. The latter are expected to take the floor on Friday.