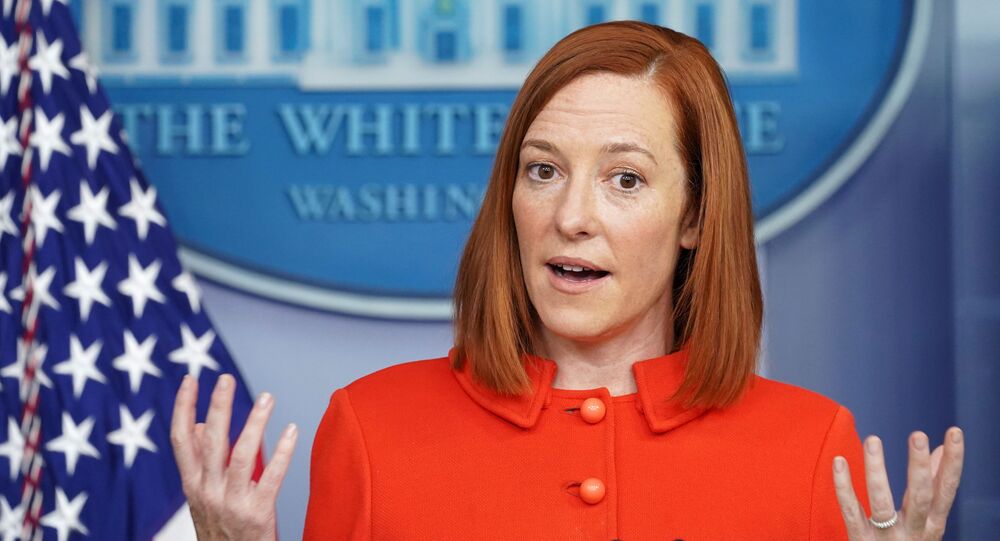 The sixth branch of the US military was created in 2019 on the order of former US President Donald Trump. Comprising military and civilian personnel, the agency has been tasked with protecting US assets in space, such as satellites used for communication and surveillance.

It seems that the Biden administration has admitted that it doesn’t know anything about the US Space Force… or even how to contact it. White House Press Secretary Jen Psaki looked bewildered when a reporter from Bloomberg asked whether President Joe Biden intends to keep the military branch or dismantle it.

"I am happy to check with our Space Force point of contact. I’m not sure who that is. I will find out and see if we have any update on that", Psaki said.

Mike Rogers, the House Armed Services Committee's top Republican, called on the press secretary to apologise for her demeaning remark.

"The Space Force was passed with near unanimous support in Congress, the same type of ‘unity’ President Biden is supposedly working towards. Jen Psaki needs to immediately apologize to the men and women of the Space Force for this disgraceful comment", Rogers said.

Another official, Michael Waltz, reminded Psaki that the military branch was established to protect US national security and the country’s space missions.

While the Biden Administration continues to think about whether or not the #CCP is a threat, China is working overtime to become the dominant force in space.

We need the professionals, @SpaceForceDoD, to keep American’s safe. https://t.co/K3S5dqWujg

"The Space Force is an official branch of our armed services and the Biden administration goes out and openly mocks it on television for all to see? The level of disrespect they have for those who serve is disgraceful", Boebert wrote on Twitter.

Commenting on the issue, Todd Harrison, defence and space analyst at the Center for Strategic and International Studies, said Psaki’s response is a "pretty clear indication that national security space is not a top priority for the White House — at least not right now".

A spokesperson for the Space Force has declined to comment on the issue.

Following the criticism, Psaki posted tweet inviting members of the branch to the briefing room.

We look forward to the continuing work of Space Force and invite the members of the team to come visit us in the briefing room anytime to share an update on their important work.

​Incidentally this is not the first time that Psaki has found herself in hot water over comments she has made during press briefings. She made a number of gaffes during her tenure as spokesperson for the US State Department. In 2014, commenting on the vote for autonomy in Eastern Ukraine, she condemned "carousel voting". When a reporter from the Associated Press asked her what the term means, she said she was "not familiar with" it.

During another press conference, she was caught on a hot mic calling her own response to the arrest of former Egyptian President Hosni Mubarak ridiculous.

Since assuming office, Joe Biden has reversed a number of policies adopted by his predecessor Donald Trump and reports have said that the Space Force may meet the same fate. However, experts suggest that the Democrat intends to maintain the military branch, as terminating it would require a vote in Congress.

Discussion about an independent Space Corps has been going on for years in the United States and the first debate on creating one dates back to George W. Bush’s presidency. Donald Trump’s idea received mixed responses, with many legislators praising the Republican. However, it was also criticised both internally and externally, with opponents of the move saying it may result in an arms race in space that could threaten the world.