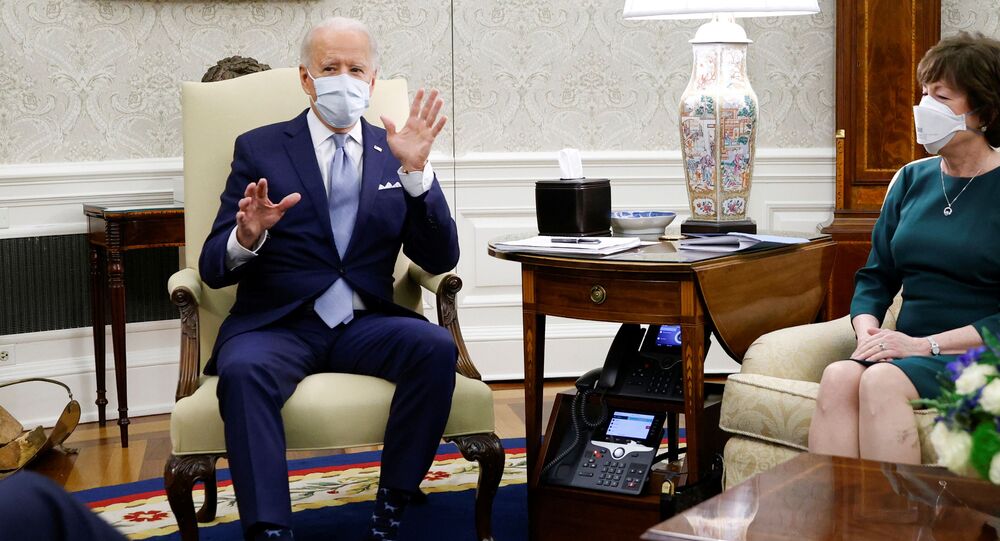 President Joe Biden and a group of 10 Republican Party (GOP) senators held what has been hailed as a productive meeting on Monday to negotiate a coronavirus relief package, reports The Washington Post.

While the outcome failed to produce any definitive deal, both sides were cited as agreeing there was room for further discussions to produce a bipartisan agreement.

Sen. Susan Collins (R-Maine), spearheading the attempt to negotiate a deal to suit both sides, described the exchange as "cordial".

"It was a very good exchange of views. I wouldn't say that we came together on a package tonight, no one expected that in a two hour meeting. But what we did agree to do was follow up and talk further at the staff level and amongst ourselves and with the president and vice president on how we can continue to work together on this very important issue", Collins summed up the meeting when answering questions outside the White House on Monday night.

Sen. Mitt Romney (R-UT) said there are differences in almost every area of the negotiations.

"I can tell you there was not an agreement reached… It was not a check-the-box meeting. It was a serious discussion of differences and I don't know what will result from it", the Utah Republican told reporters via videoconference.

Romney added that Biden has a "genuine interest in working with us".

My colleagues and I look forward to meeting with the President at the White House this afternoon to discuss the details of our #COVID19 relief proposal—a package capable of garnering bipartisan support. https://t.co/0T6SBbFxFH

​The White House also struck an upbeat tone, releasing a statement to underscore that the meeting was "productive" and "substantive". Nevertheless, it reiterated that President Joe Biden believes the $618 billion relief proposal touted by the GOP falls short of the amount required to tackle the fallout from the coronavirus pandemic.

"While there were areas of agreement, the president also reiterated his view that Congress must respond boldly and urgently, and noted many areas which the Republican senators' proposal does not address. The president also made clear that the American Rescue Plan was carefully designed to meet the stakes of this moment, and any changes in it cannot leave the nation short of its pressing needs", said White House press secretary Jen Psaki.

Biden tweeted in support of his proposed relief bill before the meeting started, and called on Congress to pass it "immediately".

Hardworking Americans need help and they need it now. That's why I'm calling on Congress to immediately pass my American Rescue Plan that will deliver direct relief, extend unemployment insurance, help folks put food on the table and keep a roof over their heads, and more.

The Biden administration is proposing a $1.9 trillion relief package, with Democratic leaders hoping to get it through Congress without delay.

The GOP has countered with a more modest proposal of $618 billion that includes a $1,000 direct payment to Americans, compared with the $1,400 direct payment in Biden's plans, with $500 for adult dependents and children. The GOP proposal presupposes $160 billion in pandemic response funding, including protective equipment, and more money for vaccine distribution. The deal would also extend the $300 per week federal unemployment benefit through 30 June. The Republican proposal also lowers the income cap for qualifying for direct fiscal assistance.

Congress passed the first Coronavirus Aid, Relief and Economic Security (CARES) Act under the then-Trump administration in March 2020, dispensing roughly $3 trillion as paycheck protection for workers, loans, and grants for businesses, and other personal aid for qualifying citizens and residents.

A tussle subsequently ensued between Democrats and Republicans in Congress on a successive relief plan.

Joe Biden's Democratic Party holds a narrow advantage in the House of Representatives, while in the Senate it is split 50-50 with the Republicans, leaving Vice President Kamala Harris to break any emerging ties.

Biden has pledged to find common ground with political opponents to pass bipartisan legislation and is ostensibly seeking to overcome bitter polarisation as he gears up to pitch a legislative agenda that includes economic relief tied to the pandemic.

While Joe Biden might be open to further negotiations with the GOP on a COVID-19 stimulus bill, some Democrats appeared to be busy arming themselves against a possible breakdown in the dialogue.

On Monday, Senate Majority Leader Chuck Schumer (D-N.Y.) and House Speaker Nancy Pelosi (D-Calif.) launched the process of advancing a Budget Reconciliation Bill to allow the party to pass Biden's $1.9 trillion COVID relief plan with a simple majority vote in the Senate instead of the 60 votes required.
If the bill is passed, no Republican votes would have to be courted.

Breaking: Schumer & Pelosi have filed a joint budget resolution, setting up the reconciliation process to streamline passage of Biden's $1.9 trillion COVID package with or without GOP support pic.twitter.com/yEK83L7sya

​Sen. Shelley Moore Capito (R-W.Va.) weighed in, saying Biden "seemed really happy to be in the game of negotiating", However, some Democrats suggest that negotiating with Republicans could drag out indefinitely with no guarantee of success.