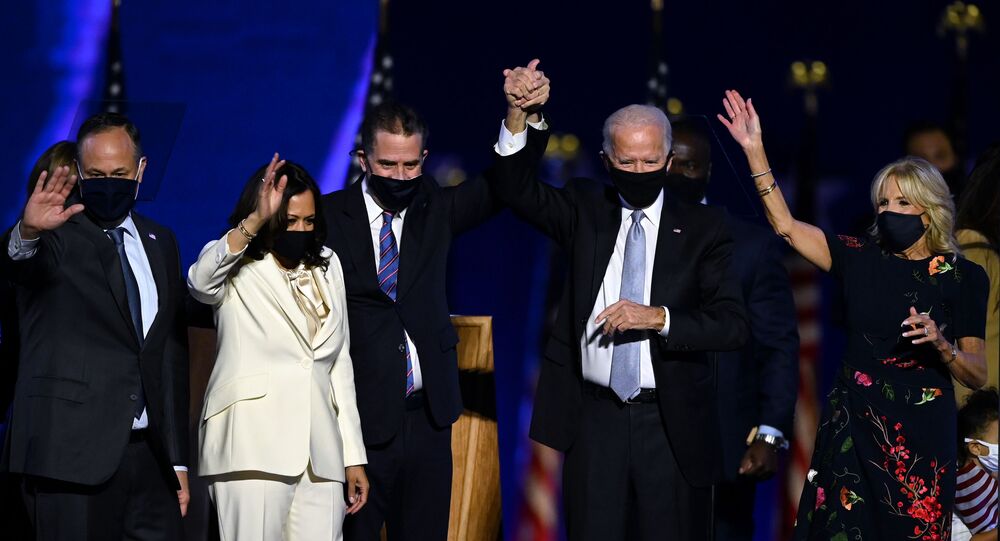 Joe Biden has repeatedly denied claims he was involved in his son Hunter's business dealings in Ukraine, something that President Donald Trump insists should be investigated.

Joe Biden's brother has revealed how the US president-elect earlier cautioned the Biden men after he feared their scandals could tarnish his presidential bid.

In a Monday interview with TC Scornavacchi, podcast host of "TC After Dark", Frank Biden pointed out that when the Biden men were under close press scrutiny in the run-up to the 3 November US presidential election the "natural instinct was to defend".

"Imagine Jim, Hunter and I, how awful we felt that we're reflecting poorly on Joe. That if something goes wrong here it's our fault. See that, Joe took us off that guilt train like nobody's business, 'Don't you dare! Don't you dare buy into that'", the 67-year-old said, apparently citing the then-Democratic presidential hopeful as saying.

At the time, President Donald Trump called for a probe into Hunter Biden's Ukrainian business dealings, while Jim was facing questions over his cooperation with Hunter on a failed Chinese investment venture.

In addition, Frank was facing a burden of paying a 1999 car crash victim's family a one-million dollar compensation that he owed them.

Frank Biden's Monday interview came a few days ahead of the president-elect's inauguration and a month after Joe Biden again stood up for his son in connection with an investigation into Hunter Biden's taxes by the US Attorney's Office in Delaware.

Speaking to CBS Evening News in mid-December, the president-elect expressed "great confidence" in his son, adding that he is "not concerned about any accusations" made against Hunter.

Hunter Biden earlier confirmed that he is under federal investigation over his "tax affairs" linked to business dealings in Ukraine and China as Fox News claimed he had failed to report some $400,000 in income he received from the Ukrainian energy company Burisma Holdings.

The developments followed a scandal in October, when the New York Post published an article about two alleged emails that Hunter Biden had purportedly received from a top Burisma official while he was on the board of the firm.

In one email, Burisma board adviser Vadym Pozharskyi asked Hunter Biden to "use [his] influence" to politically support the Ukrainian company, while in another one, Pozharskyi thanked the younger Biden for arranging a meeting with his father.

© AFP 2021 / Astrid Stawiarz
Trump Slams Hunter Biden's 'Laptop From Hell', Likens it to Weiner's Computer in Clinton Email Probe
All this was at first largely unnoticed by the mainstream media as social media giants, Facebook and Twitterm ven blocked the original New York Post story, which has been described as a "smear campaign" and "Russian disinformation".