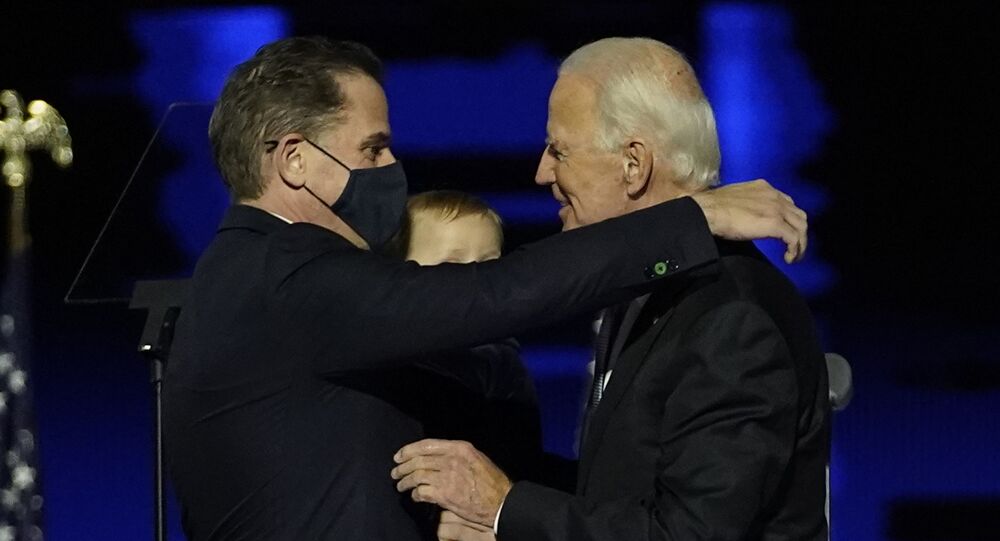 During the 2020 election campaign, an expose by the New York Post in October had referenced emails allegedly recovered from a laptop purportedly belonging to Joe Biden’s son, Hunter Biden, suggesting that the Democratic presidential hopeful was implicated in his son’s foreign business dealings.

.@TheJusticeDept must appoint a Special Counsel to investigate Hunter Biden’s conduct and contents of his laptop.

This needs to be investigated free from political interference. No matter who is in the White House.

​The letter sent to Barr by the GOP representative also urged that the contents of a laptop purportedly belonging to projected President-Elect Joe Biden’s son and currently in the Federal Bureau of Investigation’s possession be investigated.

“This investigation is critical to defending the integrity of our republic and ensuring a potential Biden Administration will not be the subject of undue foreign interference,” wrote Buck, according to the outlet.

In reference to the so-called “Biden laptop” scandal that erupted amid the presidential campaign that pitted Democratic contender for the White House Joe Biden against the sitting President, Republican Donald Trump, the congressman added:

“Americans have the right to know whether Mr. Biden’s reported ties to foreign governments will make him the subject of blackmail attempts or other nefarious efforts to undermine US national security or otherwise improperly influence American foreign policy.”

Rule Out ‘Conflict of Interest’

The Republican politician underscored that it was in the Attorney General’s power to appoint a special counsel to “investigate and prosecute any matter that would present a conflict of interest for the Department or other extraordinary circumstances.”

Voicing his concerns for upholding the “integrity of the government and the security of our republic,” Ken Buck wrote in the letter to Barr:

“Similar to when the DOJ appointed Special Counsel Robert S. Mueller III, it is critical that this investigation continue free from political interference, no matter who is in the White House.”

Buck emphatically called upon the Department of Justice (DOJ) to appoint a Special Counsel to ensure that a probe into Hunter Biden’s actions and the “potentially incriminating contents” of his purported laptop be completed.

There has not yet been any official comment on Ken Buck’s letter from Joe Biden’s representatives or the Justice Department.

The politician’s letter comes as projected President-Elect Joe Biden has been naming his picks for top posts in a potential administration amid continued efforts by the Trump legal team to overturn the results of the elections, which the sitting President has slammed as “rigged”.

The laptop and scandalous emails allegedly retrieved from it made the headlines during the final stages of the presidential election campaign.

The documents were first obtained by The New York Post in October, with the outlet revealing that Donald Trump’s attorney Rudy Giuliani had provided the emails allegedly belonging to Hunter Biden and ostensibly shedding light on his dealings with Ukrainian natural gas firm Burisma Holdings, as well as his work with a Chinese energy firm.

The documents purportedly contained evidence that the former US vice-president’s son, who was on the board of the Ukrainian company between 2014 and 2019, “peddled” access to his father, Joe Biden.

Some of the documents also indicated that the Biden family used its influence to sign off on lucrative deals with a wealthy Communist Party-linked Chinese tycoon.

Despite the scandalous nature of the alleged documents, most mainstream media blatantly ignored the "Biden laptop” story or denounced it as "right-wing propaganda".

Donald Trump, however, had repeatedly referenced the potentially incriminating materials, slamming his rival in the 2020 election, Joe Biden, as "the most compromised person in the history of American politics", while calling out the mass media for “glossing over” the scandal.

Throughout his presidential campaign, Joe Biden has repeatedly denied any involvement with, or knowledge of, his son's foreign business dealings.

No 'Clarity' on FBI Probe

In October Fox News reported that the laptop purportedly belonging to Hunter Biden was in the possession of the FBI, with the agency having subpoenaed the laptop and hard drive in connection with a money laundering investigation dating to late 2019, according to documents obtained by the outlet and verified by multiple federal law enforcement officials who reviewed them.

However, as the FBI has neither confirmed nor denied the existence of an investigation into the laptop or the emails, as is standard practice, the publication writes that there is currently no clarity regarding whether an investigation is ongoing.

Hunter Biden's business dealings are also being looked into by the Senate Committee on Homeland Security and Governmental Affairs.

A September report by two Republican senators, Senate Finance Committee Chairman Charles Grassley of Iowa and Homeland Security and Governmental Affairs Chairman Ron Johnson alleged that Hunter Biden and other Biden family members had “cashed in” on the then-vice presidency of Joe Biden through a “vast financial network that connected them to foreign nationals and foreign governments across the globe”.

A subsequent fresh report allegedly shed light on close financial and business ties between Hunter Biden and a wealthy Communist-party linked Chinese tycoon, wrote The Washington Times in late November.
The two Senate Republicans have vowed to continue their work.

“Tony Bobulinski coming forward, the computer being revealed, the FBI possibly starting an investigation. We had a hard enough time getting what evidence we got to even write a report, and then all of a sudden our report sort of opened up this logjam,” said Grassley, referencing a former business associate of Hunter Biden.

“I’m very confident there are probably more financial transactions that will probably be revealed,” added Johnson.

Biden Says His Family to Keep Distance From Affairs of State