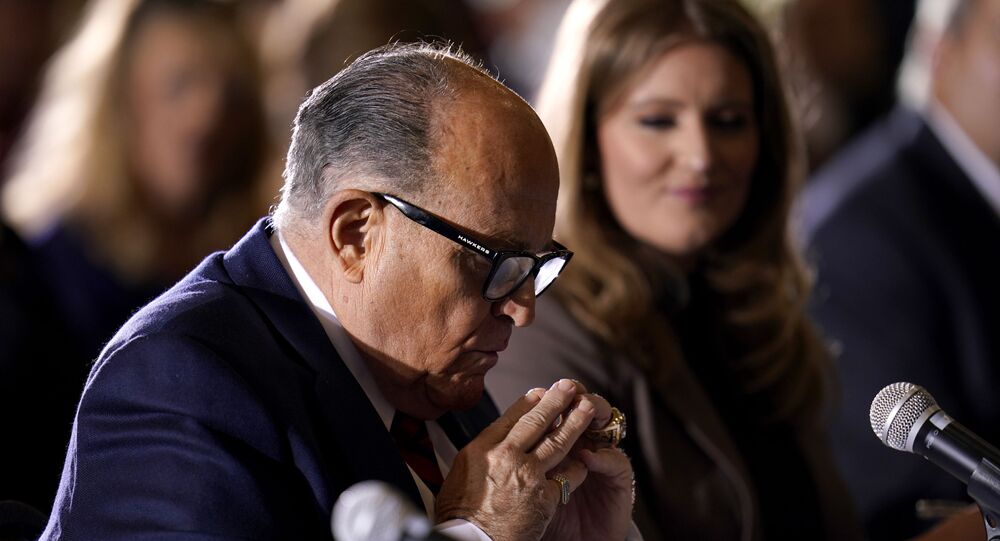 Earlier this year, many members of the Trump team contracted the COVID-19 coronavirus, including the president and members of his family.

US President Donald Trump's lawyer Rudy Giuliani, 76, has been admitted to Georgetown University Hospital after he was announced to have tested positive for coronavirus, according to CNN.

Even though he hasn't confirmed the news about his hospitalisation, Giuliani has taken to Twitter to thank his friends and followers for all the kind wishes and stressed that he's feeling "good".

Thank you to all my friends and followers for all the prayers and kind wishes.

Recovering quickly and keeping up with everything.

Earlier, his son Andrew wrote in a statement that followed Trump's tweet about Giuliani's positive COVID-19 diagnosis, that his father was feeling well and is currently receiving treatment.

My Dad @RudyGiuliani is resting, getting great care and feeling well. Thank you to all the friends who have reached out concerned about his well being. https://t.co/0FVceiNnHc

On Sunday, incumbent US President Donald Trump tweeted that Giuliani, his personal attorney and a prominent member of his legal team that is battling the preliminary results of the US presidential election, had tested positive for "the China Virus".

.@RudyGiuliani, by far the greatest mayor in the history of NYC, and who has been working tirelessly exposing the most corrupt election (by far!) in the history of the USA, has tested positive for the China Virus. Get better soon Rudy, we will carry on!!!

Later in the day, the Trump legal team posted a statement on a timeline for Giuliani’s COVID-19 diagnosis, in which they claimed that he tested negative twice before visiting the states of Arizona, Michigan and Georgia. Other team members who reportedly had close contact with Giuliani in recent days will undergo testing while following all precautions.

Giuliani at a Thursday legislative hearing in Georgia alleged massive irregularities during the 3 November presidential election vote, apparently not wearing a mask.

No information is currently available as to whether Giuliani is experiencing symptoms, although he was often present at public events and ostensibly exposed to COVID-19, including during Trump's preparation for his first presidential debate against Democratic candidate Joe Biden.

Earlier in November, Giuliani's son, Andrew, announced that he had tested positive for COVID-19 after attending a Trump campaign press conference. Andrew said that he had mild symptoms and was in quarantine.

Trump tested positive for the coronavirus in early October along with his wife, Melania Trump. Later, the US president was hospitalized at Walter Reed National Military Medical Centre, where he spent several days being treated before returning to the White House saying he was feeling "better than ever".