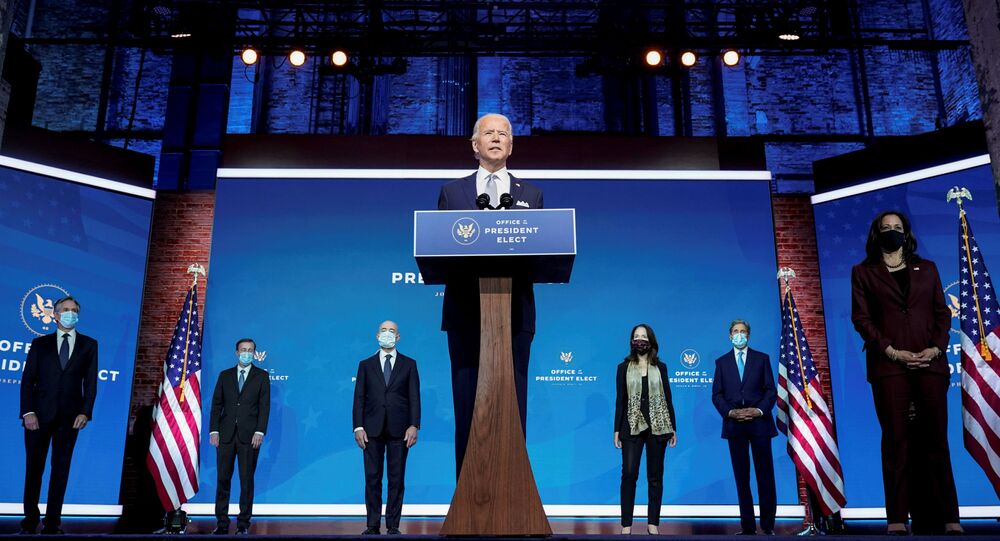 The presumptive President-elect, who continues to be hounded by Donald Trump over alleged voter fraud, has already taken flak from the progressive wing of his own party, keeping Bernie Sanders and Elizabeth Warren out of his cabinet while appointing ‘moderates’ seeking to preserve the status quo at home and hang on to the US empire abroad.

Republican Senator Tom Cotton of Arkansas, one of the rising stars within the GOP, has blasted Joe Biden over his intention to fill his cabinet with people he indicated would be intolerable for Republicans.

“Biden said he wanted to unify the country. But he’s picked a national security team that is weak on China, a [Department of Homeland Security] nominee who sold visas for powerful political friends, and a partisan hack who called [Republican Maine Senator] Susan Collins “the worst” for [the Office of Management and Budget]. So much for unity,” Cotton tweeted, referring to Biden’s post-election comments about the need to “heal” the country and promises to be a “president for all Americans – whether you voted for me or not.”

The national security team Cotton mentioned includes Antony Blinken, a former Obama-era Washington insider and proponent of wars in Iraq, Libya and Syria, whom Biden has tapped for Secretary of State. Blinken received gushing praise from some Chinese media after his selection, with a recent op-ed in China’s English-language television channel CGTN calling him a “consummate diplomat” with a “wealth of foreign policy experience” and a “cool, calm and cerebral” individual, “a moderate and a globalist.”

We have assembled a team of highly respected and qualified individuals to serve as national security and foreign policy leaders. Tune in as President-elect Biden & Vice President-elect Harris introduce them. https://t.co/bQpSiT1GHY

Blinken’s selection is presumably a sore point for Republicans, given the Trump administration’s history of trade wars, sanctions and restrictions against the People’s Republic in a bid to secure what the president called “fair trade deals".

The Department of Homeland Security nominee mentioned by Cotton is Alejandro Mayorkas, an Obama-era official whom the DHS inspector general found in 2015 to have illicitly intervened to grease the wheels of the visa-approval process on behalf of wealthy foreign investors while serving at the department’s visa division. The scandal temporarily delayed his confirmation to the post of deputy-secretary of Homeland Security, although he insisted that his “errors” were not illegal.

As for Biden’s OMB pick, this is a reference to Neera Tanden, the president and chief executive of the Center for American Progress, a liberal think-tank founded by Bill Clinton's chief of staff John Podesta which has been criticised for its alleged pro-United Arab Emirates and pro-Saudi lobbying, as well as a lack of transparency regarding funding. Tanden is known to be strongly tied to the Clinton family, serving as Hillary Clinton’s campaign manager in 2016.

© REUTERS / JOSHUA ROBERTS
Could a Biden Presidency Mean Return to Humanitarian Bombing of 'Pax Obama'?
Republicans aren’t the only ones to express disappointment with Biden’s cabinet picks. The presumptive President-elect has selected former Federal Reserve Chair Janet Yellen as his Treasury Secretary, a position Massachusetts Senator Elizabeth Warren had presumably yearned for the job after her endorsement of Biden. At the same time, Biden has yet to respond to Vermont Senator Bernie Sanders’ repeated hints that he would like to be offered the Secretary of Labor job. Biden shrugged off progressives’ criticisms in a recent interview, insisting he has a “very ambitious, very progressive agenda” and saying Warren and Sanders were better off in Congress.

Non-interventionists have also sounded the alarm about Biden’s picks, voicing fears that his “America is Back” attitude may mean new wars abroad and a more consolidated and aggressive foreign policy generally.

Stoltenberg Invites Biden to Attend Next NATO Summit Set For 2021