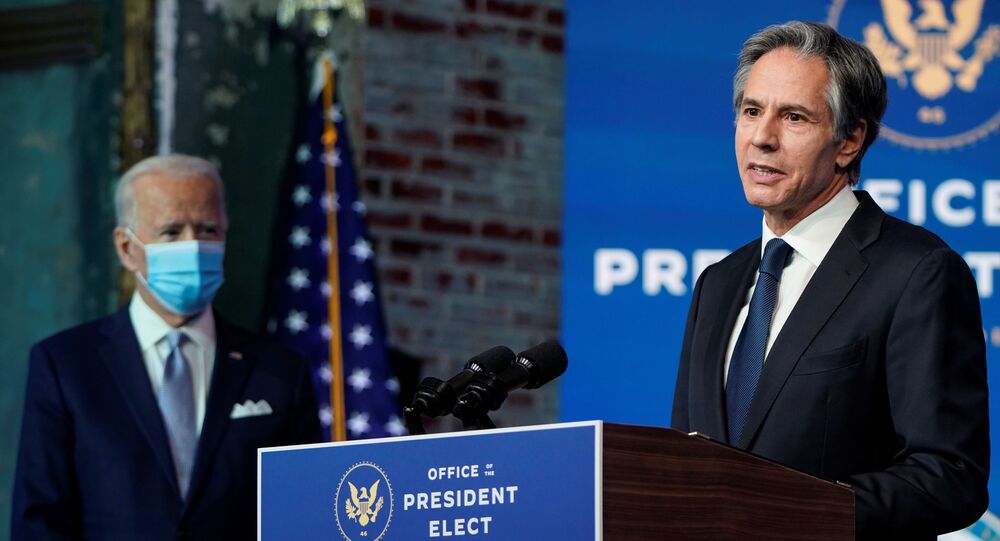 After the 'America First' foreign policy of Donald Trump - the first elected US president since Dwight Eisenhower not to start a major war - Joe Biden's election portends a re-run of the Obama years, when the promise of peace was betrayed.

Joe Biden says his cabinet appointments show "America is back" on the world stage - but is that really a good thing?

With former vice-president Biden looking increasingly secure in his claim on the White House despite ongoing legal challenges to the election process, how will his choices for his governing team shape foreign and domestic policy?

But Biden's presidency is already looking like an unofficial third term for Barack Obama, with a host of familiar faces packing the White House. And with many of the architects of the last Democratic president's foreign policy back in charge, will the world see a return to the 'Pax Obama' of 'humanitarian bombing' and regime-change after four years of President Donald Trump's America First policy?

Blinken supported the US-led NATO bombing campaign on Libya in support of the overthrow of the Green Revolution and the murder of its leader Colonel Muammar Gaddafi.

He also publicly justified the transfer of arms from Libya to sectarian militants attempting to overthrow the Syrian government, and was described by the Washington Post as "one of the government's key players in drafting Syria policy" - which he frequently defended to Congress and the media, even as money weapons and recruits ended up in the arms of al-Qaeda and Daesh.

Blinken was also a point-man for Obama's material support for the Saudi-led bombing and invasion of Yemen, which aid agencies say has caused a nationwide famine. His appointment belies Biden's campaign-trail opposition to the Saudi war on its southern neighbour.

Speaking in the Saudi capital Riyadh in 2015, he said the bombing campaign sent a “strong message to the Houthis and their allies that they cannot overrun Yemen by force” - in reference to the sitting Yemeni government. “As part of that effort, we have expedited weapons deliveries, we have increased our intelligence sharing, and we have established a joint coordination planning cell in the Saudi operation centre.”

​Blinken supported Israel's 2014 bombing of the Gaza Strip and has also signalled that Biden will maintain Israeli military dominance in the Middle East. Recently he said the new administration would reverse Trump's decision to allow the sale of Lockheed F-35 Lightning II stealth attack jets to the United Arab Emirates in a "quid pro quo" for normalising relations with Tel Aviv.

© REUTERS / Jonathan Ernst
Biden's Blinken Brexit Bust-up With BoJo: Is This the End of the 'Special Relationship'?
Blinken has also taken a hard line on whistle-blowers, both domestic and foreign. He has previously said that National Security Agency leaker Edward Snowden should return to the US from Russia and face trial, and that he wished the Obama administration could have found a way to charge Wikileaks founder Julian Assange.

Like Obama, Biden has promised to end the "forever wars" in Iraq and Afghanistan, where the Trump administration signed a peace accord with the Taliban and is withdrawing troops.

But Blinken said this week that could simply mean major trop deployments would be replaced by "discrete, small-scale, sustainable operations, maybe led by special forces to support local actors" - precisely the model used in Syria against the will of its government. He also repeated unfounded claims that Russia had put bounties on the heads of US troops in Afghanistan.

Biden's appointment of Avril Haines, a lawyer like himself and running-mate Kamala Harris, as the first female Director of National Intelligence is not a good omen for human rights. As deputy director the Central Intelligence Agency under Obama, she worked with director John Brennan on the policy of "targeted killings" in drone strikes in nations with which the US was not at war.

The American Civil Liberties Union was highly critical of that policy, and cast doubt on the Obama administration's 2015 claim that it had only killed between 64 and 116 "non-combatants" - as a euphemism for innocent civilians - since Obama took office in 2009. The ACLU quoted figures from journalists and human rights groups of between 200 and 1,000 civilian killing.

Biden's homeland security secretary will be Alejandro Mayorkas, who has been described as a "refugee" as his Jewish parents emigrated from socialist Cuba to the USA in 1960 when he was just a year old - which does not bode well for US relations with Latin America's many left-wing governments.

Pro-migrant activists were quick to welcome his appointment after Trump's four-year crackdown on illegal immigration across the southern border with Mexico that saw the fees charged by "coyotes" - human traffickers - double.

“He will not only bring critical leadership but a set of life experiences that will animate the department’s work ahead,” American Immigration Lawyers Association executive director Benjamin Johnson.

Others hoped it meant an end to detentions of illegal immigrants at the border and a strengthening of the Deferred Action for Childhood Arrivals (DACA) programme created by Obama in a 2012 executive order.

© AP Photo / Patrick Semansky
'Big Change' From Trump Team: US Mainstream Media Applauds Biden's Cabinet Rollout
DACA allows those brought to the US illegally as children to apply every two years for right to remain, but does not grant citizenship. Trump sought to end the programme, saying he wanted Congress to legislate a permanent replacement, but was blocked by legal action from civil rights groups.

“We look forward to the immediate expansion of the DACA program and the dismantling of the detention and deportation machine that was created under Obama and expanded by Trump," said immigrant legal aid charity RAICES chief advocacy officer Erika Andiola. “Leading this department will be no easy task, but we hope that as the first Latino and someone who has advocated for immigrant rights, he will change the direction of DHS once and for all.”