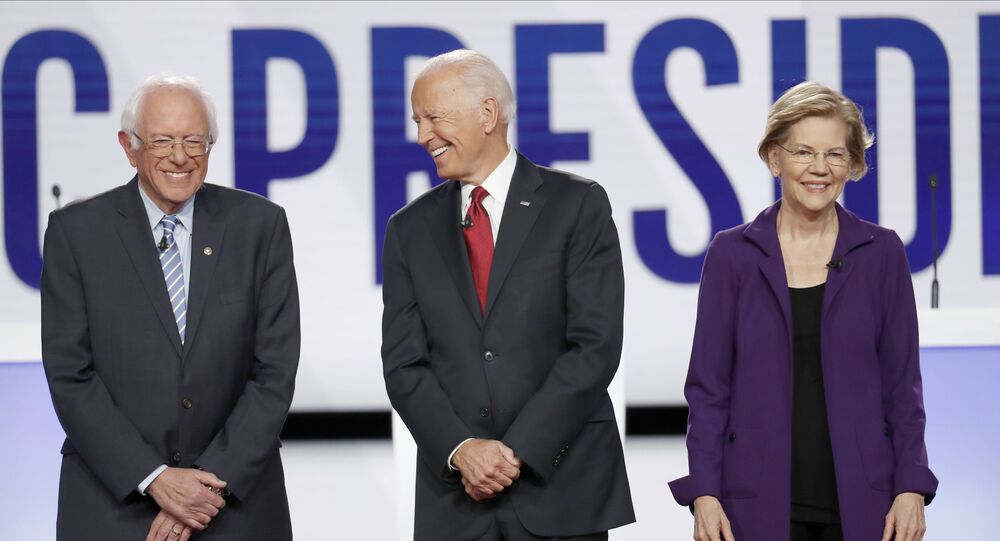 Although Elizabeth Warren and Bernie Sanders' endorsements are believed to have paved the way for Joe Biden's successful presidential nomination, the former vice president isn't rushing to return the favour. US independent journalist Max Parry has explained how the expectations of the so-called “progressives” were ultimately unrequited.

Joe Biden has named former Federal Reserve Chair Janet Yellen as his Treasury Secretary, the position Elizabeth Warren reportedly sought after endorsing the ex-vice president, and has not responded to Bernie Sanders' repeated hints that he would like to become Labor Secretary. However, the Democratic presidential candidate told NBC News’ Lester Holt on Tuesday that his two former contenders were indispensable to advancing his "progressive agenda" in Congress.

“I have a very ambitious, very progressive agenda. And it’s going to take really strong leaders in the House and Senate to get it done," Biden stated, adding, however, that “there’s nothing really off the table”.

"By all indications, progressives have been shut out and excluded from Biden's administration and I do not expect Sanders or even Elizabeth Warren to be awarded with positions" says American independent journalist Max Parry. "In fact, when Biden was asked in a recent interview with NBC News about the possibility of Warren or Sanders being appointed, he stated that progressives were already represented in his picks so far, which predictably provoked anger in the progressive wing of the party".

To add to the controversy, instead of the much-anticipated "blue wave" in the 2020 Congressional elections the Democrats have "ended up losing several (Congressional seats) and barely held on to their majority while gaining no ground in the Senate; both sides are blaming the other for the overall poor performance of the party", the journalist remarks.

"Of course it is really the establishment wing that is to blame because they campaigned on appealing to moderates who, if you believe the election results can be taken at face value, split their tickets and voted Republican except for the presidency", he says.

On top of that, the Biden campaign had previously signalled that it was going to award even some Republicans with cabinet positions, Parry highlights. On 11 November, The Hill named a number of GOP politicians who could potentially serve in a Biden government, including Cindy McCain, former Sen. Jeff Flake, former governor of Ohio John Kasich, Maryland Governor Larry Hogan, and Massachusetts Governor Charlie Baker.

"I cannot imagine this was part of the Biden-Sanders Unity Task Force so I would be truly surprised if Bernie is awarded with a Labor Secretary position because Biden has displayed no signs of following through on any of his pledges to unite the party and instead appears to be making the divide between the two factions of the party that much more bitter," Parry says.

Biden's first cabinet picks have become yet another disappointment for progressives since it is "too centrist for the left flank", as Bloomberg noted on Tuesday. The news agency cites a letter sent by a group of 50 progressive organisations to the Biden campaign on 11 May 2020 that urged the former vice-president to kick off a broad foreign policy reform. However, Biden's decision to tap former Obama officials Antony Blinken for secretary of state, Jake Sullivan for national security advisor, and Michele Flournoy, possibly, for secretary of defense signalled that his national security cabinet "will be more centrist" than progressives would like.

"To say the least, his cabinet picks are worrisome and exemplary of the conflict of interest between the defence industry and the government, as well as a strong rejection of the 'progressive' wing of the Democrat Party which was sheep-dogged into supporting him in the election, who would obviously prefer a diminished corporate influence on his cabinet," Parry points out.

Biden's initial national security appointments are "all individuals who earned their stripes as consultants in the arms industry or Beltway foreign policy think-tanks funded by defense contractors", he explains.

"More importantly, they are all hawkish mandarins who ascribe to the bipartisan foreign policy consensus that will likely champion a reversal of Trump's occasional rebuke of certain orthodoxies in Washington and 'America First' isolationism", he says.

One of Biden's potential picks, Susan Rice, is remembered for the US' failed Rwanda strategy which resulted in a bloodshed in the region when she served as assistant secretary of state for African Affairs during Bill Clinton's second term as president.

The ex-vice president's top foreign policy advisor and Secretary of State will be Tony Blinken, who is known as one of the architects behind proxy wars in Syria and Ukraine, Parry notes, adding that Blinken also hailed Trump's attack on Syria over the alleged Khan Sheykhun chemical incident and praised the White House for sending lethal arms to Ukraine.

Yet another potential choice of Biden's, Michele Flournoy, is one of the most troubling and hawkish appointments, according to the journalist.

"Flournoy and Tony Blinken jointly founded a consulting firm called WestExec which earned money from the arms trade and the US intelligence agencies, so at this point Biden's cabinet is really a revolving door with this firm which is made up of all former Obama administration officials," he notes. "Flournoy in particular has ties to Silicon Valley and big tech monopolies, so I think we can really expect soft power and hybrid warfare to be stepped up in the US pivot to Asia against China, for example."

Even more disturbing was Flournoy's notion concerning an encirclement of China which would allow the US "sink[ing] all of China’s military vessels, submarines, and merchant ships in the South China Sea within 72 hours", Parry recalls.

"It's the return of the Beltway Blob in Biden's foreign policy team," the journalist summarises, suggesting that the recent withdrawal of troops from Afghanistan, Iraq, and Somalia authorised by Trump will hardly be completed. "Troops will not be coming home in the immediate future, that much can be certain."