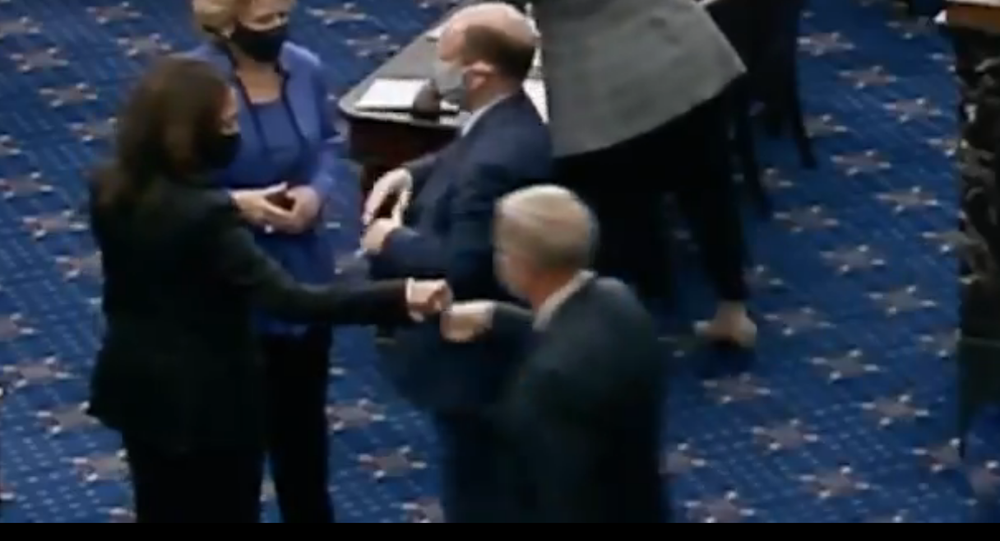 Recent months have seen heated confrontations between Democrats and Republicans, as the two political groups clashed in a national election race for seats in the Senate, the House of Representatives and the White House.

Democratic Senator Kamala Harris, who is now being referred to by most mainstream US media outlets as US vice-president elect, was caught on camera extending her fist to GOP Senator Lindsey Graham, as they both arrived to the Senate to cast a vote.

A video showing the two US Senators fistbumping with Graham also tapping Harris on the shoulder immediately went viral, with netizens praising the move as an apparent signal of political unity or, at least, civility.

Some, however, argued that "there is no vice-president elect here", reminding other users that the official results of the US election are still to arrive.

Here, Harris can be seen extending her fist to Sen. Lindsey Graham (R-SC) for a bump. pic.twitter.com/3Mtaaykjpl

​While some argued that being polite to colleagues is not breaking news, others admired the fact that two Senators from opposing parties demonstrated friendliness toward each other.

Civility - it’s appropriate, even for someone like Lindsay. As long as he’s there, it behooves her to get along with him. I always think of RBG & Scalia being friends, smart thinking.

I see no problem with this. Last thing I want is pure hatred in congress. Agree to disagree and move on.

People urged each other to be less prone to division, while some suggested that "it's all just a big private club".

It’s easy to forget that these people have dinner with each other after debating all day. They are the godparents of each other’s kids.

It’s us average Americans who let politics divide us. I will try to be better than that!

We now see that it's all just a big private club, one of which Trump was never a member.

​Some, however, argued that the move was "bad for the reputation" of both - with others immediately noted that it is okay and even classy to be polite to those with whom you disagree.

So now fist-bumping someone you disagree with is bad for your reputation. Wow dude...

Split right down the middle of comments between "Good to see" and "How could he?"
The right answer is "Good to see."
One of my favorite things about High School Football is when the teams shake hands - winners and losers - after battle.
That's American.

​Kamala Harris, along with her partner Joe Biden, has received congratulations from some world leaders and media figures on becoming the "vice-president elect" and "president-elect", respectively, although the official results of the US election will only be made clear in December.

If elected, Harris will become the first Black and Asian woman to assume the office of US vice-president.