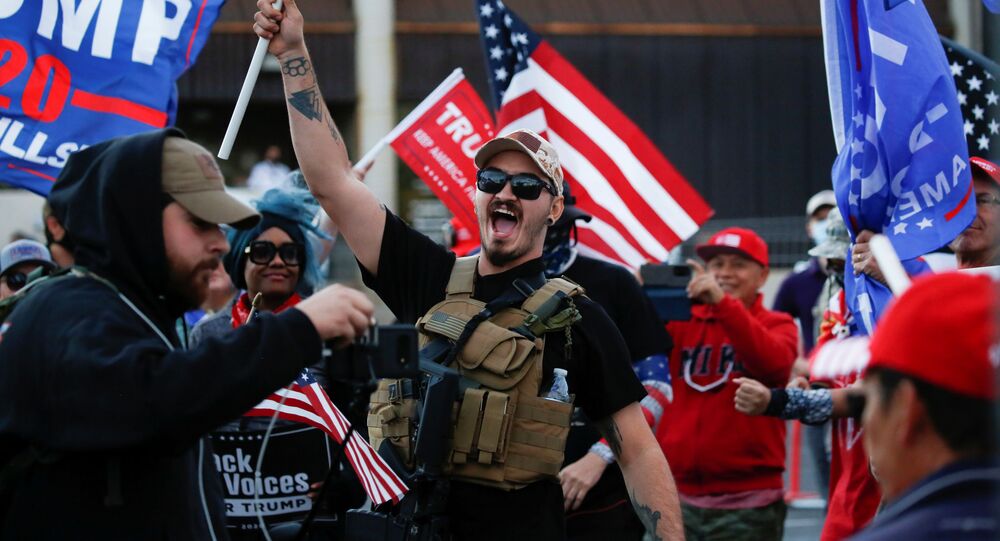 US Election: Democratic Party Would be Unable to Unite Americans if Biden Won, Prof Says

The mainstream media' snubbing of ordinary Americans' concerns about the fairness of the 2020 election will only further polarise US society, says Vladimir Golstein, associate professor at Brown University in Rhode Island, adding that it's not the way to treat 70 plus million Trump voters.

The Donald Trump campaign's decision to file several lawsuits over alleged election irregularities has prompted resentment from the US corporate press, that declared Joe Biden the winner before the states had finalised the 2020 race's results.

While some mainstream media pundits have urged the incumbent president to concede, others are speculating over whether Trump may stage a coup d'etat. For his part, CNN anchor Anderson Cooper resorted to name-calling, comparing the sitting president to an "obese turtle on his back flailing in the hot sun realising his time is over" much to the glee of MSNBC host Mika Brzezinski. Later Cooper admitted that he "regrets" making this comment.

Meanwhile, despite soaring tensions, Trumpers have not been spotted behaving violently at peaceful protests in support of the US President. However, it is unlikely that the Democratic Party would be able to gather law abiding American conservatives under its banners if Joe Biden won, argues Vladimir Golstein, associate professor at Brown University in Rhode Island.

Sputnik: Why were there no violent riots among Trump's supporters despite the claim that the elections were rigged? Why were there no clashes between Trumpers and antifa, contrary to earlier media predictions?

Vladimir Golstein: Mass media began to believe its own lies, creating a very disturbing situation. Whatever Trump’s faults are – and there are many – he is by no means a vicious, almost fascist dictator, directing his brownshirts into violence, as the press imagined. So during the frenzy, into which the press began to whip itself and its Democratic audience before the election, all sorts of scenarios began to aired, including Trump supporters stirring violence in some innocent Democratic states. With my own ears, I happened to hear a broadcast on National Public Radio (the benchmark of educated liberal opinion) – an interview with some sixty-something progressive woman who declared that she'd bought herself a gun – despite never using one before – because she intends to defend herself from nasty Trump supporters.

Is anyone archiving these Trump sycophants for when they try to downplay or deny their complicity in the future? I foresee decent probability of many deleted Tweets, writings, photos in the future

​It doesn’t mean that Trump supporters are happy with the endless demonisation or with endless condescension with which mass media treats their concerns, dismissing them as conspiracy theorists or stupid white men. That’s not the way to treat seventy five million of Americans who voted for the President.

Joe promised not to declare victory until the election results were independently certified. pic.twitter.com/IvwIJylwZN

​Sputnik: Joe Biden has called upon the people of the US to "unite". What's your take on the projected winner's chances of uniting the Americans? Could the memory of the Democratic Party's four-year long attacks against Trump hinder this effort?

Vladimir Golstein: I don’t think Democrats, in their current version, would be able to unite the country. Of course if Covid-19 is conquered and the economy picks up – then Trump supporters would be willing to give the Democrats a chance.

But I have my strong doubts about any positive changes occurring on Biden’s watch. He’s been with Obama and his people for too long. And in the opinion of the Democratic Party, the Obama years were the golden years of American Democracy. So I expect the continuation of the same neo-liberal economic and neo-conservative foreign policies, which turned people away from Obama to begin with.

Any R now promoting rejection of an election or calling to not to follow the will of voters or making baseless allegations of fraud should never serve in office, join a corporate board, find a faculty position or be accepted into "polite" society. We have a list.

​Furthermore, it also appears – judging by some voiced opinions of the Democrats and the press that supports them – that the Democrats want to continue demonising Trump and blame their own miscalculations and their myopic or ineffective policies on him and Republicans. This strategy would hardly endear Biden’s government to those who voted for Trump.

Sputnik: After Democratic congresswoman Alexandria Ocasia-Cortez threatened to include Trump supporters to an "enemy list", CNN's Jake Tapper tweeted that "at a certain point one has to think not only about what’s best for the nation but how any future employers might see your character defined during adversity". What's behind the left camp's attempt to impose its vision on the other party, and could it anyhow improve the already-tense situation?

Vladimir Golstein: These are radical opinions, but what is disturbing, is that they are being voiced and that many on the “progressive side” support them, dreaming of all sorts of prosecutions, be it of Trump and his family or some Republican politicians and voters. The popularity of these opinions is a very good indication as to how prevalent the so-called Trump Derangement Syndrome (TDS) is.

I truly sympathize with those dealing with losing — it’s not easy — but at a certain point one has to think not only about what’s best for the nation (peaceful transfer of power) but how any future employers might see your character defined during adversity.

​For many who voted for Biden, the actual policies and solutions matter much less than reversing everything that Trump has accomplished while placing Trump and his dangerous supporters behind bars. In the long run, I am sure, that the country would not pay much attention to these loony propositions, but a lot of valuable time and effort would surely be wasted on polarising and antogonising the country further.

Sputnik: What's your take on the Trump camp's apparent decision to fight to the bitter end, file lawsuits, launch inquiries and recount votes? Regardless of whether or not it will bring victory to Trump, could this help dispel the growing controversy? Or could it further exacerbate the situation, as the Democratic Party claims?

Vladimir Golstein: Trump was very suspicious of mailing votes and other possible abuses. Furthermore, he convinced his supporters that these abuses were possible.

Feeding into these suspicions was a very strange pattern of exit polls and calculations. When on the election night the country went to bed, Trump was winning in some crucial states, which by the morning he began to lose. It will be fair to everyone concerned to investigate the matter further and establish whether the irregularities either confirm or deny Biden victory.

Many observers have suggested that even if some irregularities were to be found, there won’t be enough of them to nullify the results of the election. So once Trump’s team investigates the voting patterns in one or two states and realise that their lawsuits are frivolous, Trump should concede. But there is nothing wrong in scrutinising at least one state and informing his supporters about the outcome. Fighting to the bitter end won’t be good for the country, and I am sure that Trump advisors would talk him out of it. And again, during his four years in White House, Trump didn’t really live up to the reputation of a brutal dictator who uses violence to crush the opposition. So – despite liberal press wet dreams – he will step down peacefully.