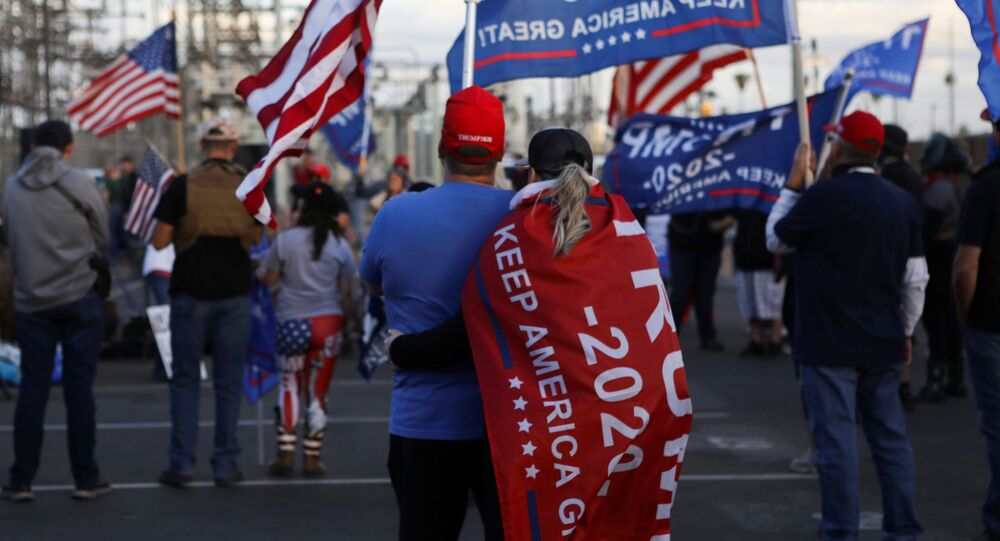 The mainstream coverage of US Election Day and the subsequent vote counting controversy have deepened the rift between the US established media and American conservative viewers, which are now feeling growingly isolated and disenchanted amid censorship and an information blackout, says US investigative journalist Jason Goodman.

On 7 November, CNN, The Associated Press, NBC, CBS, ABC and Fox News called the 2020 for Joe Biden declaring him the "president-elect" while several US states have yet to certify their voting results, with some of them still counting ballots and some facing lawsuits over alleged election fraud. However, a number of US news agencies, including Newsmax, One America News Network, The Epoch Times, and Breitbart, have refused to call the winner so far.

At the same time, the US MSM has denounced the Trump administration's concerns over the supposed election irregularities as "false and baseless". Facebook flags inputs about the 2020 elections, while Twitter either tags or censors posts which cast doubt about Joe Biden's projected win .

The US mainstream media's decision to "coronate" Joe Biden is a "fraud on its face", says Jason Goodman, an American investigative journalist and founder of Crowdsource the Truth, stressing that the media "does not determine the winner of the Presidential election, the electors of each state do that and not until 14 December". Furthermore, given that, the legal process has literally just begun and it may go on through January 2021, he suggests.

This is crazy. He helped Biden draft his speech on Sat night, without disclosing that fact to the audience (or anyone?), then reacted to the speech live on the air as a paid MSNBC contributor. Let me guess- he liked it? https://t.co/XnZqprPUef

​The US media is treating the two presidential contenders unequally, evoking suspicions of a collusion between the "fourth power", the Democratic camp and its intelligence allies, akin to the so-called Operation Mockingbird, described by famous Watergate reporter Carl Bernstein, according to Goodman. The 25,000-word story uncovering how the CIA had instrumentalised the press during the Cold War was published by Rolling Stone magazine in October 1977.

"In 1975 US Senator Frank Church formed a Select Committee to study governmental operations with respect to intelligence activities," the investigative journalist recalls. "During the Senate hearings, then Director of Central Intelligence William Colby testified that the CIA paid and otherwise influenced journalists to control the news media in the United States and abroad."

Although George H.W. Bush reportedly suspended this controversial collaboration, there are many indicators that the cooperation between media giants, politicians and intelligence operatives may only became more pervasive as technology improved, according to Goodman.

Thus, in 2016 the MSM kicked off the Trump-Russia collusion story, based on an uncorroborated "dirty" dossier compiled by ex-MI6 agent Christopher Steele, in concert with prominent American politicians and intelligence officials. The two-year long investigation led by Special Counsel Robert Mueller eventually proved that the story was a big 'nothing burger'.

"Twitter blocking the New York Post’s Hunter Biden coverage is [yet another] perfect example," the journalist adds, citing the tech giant's decision to ban The Post from its account and temporarily restrict the story of Joe Biden son's alleged deals with Ukrainians and Chinese from sharing.

US Conservatives Turning Their Backs on Fox News

The US media's double-standard approach to Joe Biden and Donald Trump has not gone unnoticed by the American audience. Furthermore, US conservative viewers were reportedly caught by surprise due to Fox News' coverage of the election.

We are all Sandra 😂
pic.twitter.com/8eBPyHIIyd

​The media that has long been seen as "favouring" Trump was the first who called Arizona for Joe Biden on election night. Having recognised Biden as the winner of the race, Fox News cut away from the White House press secretary Kayleigh McEnany's briefing on Donald Trump's refusal to concede and voter fraud allegations on 9 November.

"Fox being exposed for what it has always been is frankly no loss," says Goodman. "Newsmax and other services will fill the void left by Fox. Podcasting, live streaming and the commoditisation of broadcast production technology allow viewers to get news from a diverse pool of independent sources like Crowdsource the Truth that aren’t influenced by corporate sponsors."

Newsmax surpassed Fox Business in daytime ratings on 4 November with 287,000 average viewers per minute in the key day part between 9 am and 4 pm and in primetime, according to Nielsen TV Ratings. Commenting on the matter, Newsweek alleged that conservatives had turned against Fox News over election coverage and massively changed the channel to Newsmax.

Given the unfolding situation, it is difficult to say if the New York Post will continue to publish damaging information on the Bidens, Goodman notes. He does not rule out that if Joe Biden wins, The Post could be sued for publishing new exposes about Hunter.

Joe Biden's possible win may result in a surge in media censorship after a series of recent exposures concerning Obama officials' apparent role in spying on the Trump campaign, the FBI mistreatment of Trump aides, and the Biden family's alleged financial machinations, according to Goodman.

"There is no doubt in my mind that the path the Biden/Harris administration has set for the United States is toward 'technocratic socialism'," the journalist suggests, adding that dissenters are likely to be "deplatformed, cancelled, and locked down".

It's likely that under Biden the Silicon Valley's giants will continue to enjoy immunity under Section 230 of the Communications Decency Act and put limits on freedom of speech, Goodman believes. He expresses doubts that the US Congress will be able to hold Twitter, Facebook, Google and Youtube accountable over tagging, flagging and banning American conservatives if Trump steps down in January 2021.

However, there is always a way out, according to the journalist: "Although Google, Facebook and Twitter have built incredibly robust platforms with huge user bases, there are many good alternative platforms and technologies emerging".

A lot of American conservatives are believed to have found a digital shelter on a platform named Parler, which they see as a viable alternative to Twitter. While on 2 November the Parler app was ranked 1,023 on iOS, just three days later it had climbed to No. 241, and then, on 6 November, it was No. 29, according to Techcrunch. On 10 November, Parler CEO John Matze announced that over 4.5 million new people have created accounts on the platform since 6 November and "over 5 million individuals were active on Parler [on Monday], an 8-fold increase from daily activity just a week ago".

​Concurrently, US netizens are also fleeing to YouTube's substitute Rumble. As BuzzFeed suggested last week, a relatively unknown video hosting site may become home for many conservative pundits and their followers.

"In many regards [these platforms] are not as developed as the traditional social media networks people are used to, but they are rapidly improving and definitely have the maverick feel that has been conspicuously absent from the Orwellian corporate sanitised internet recently", Goodman concludes.