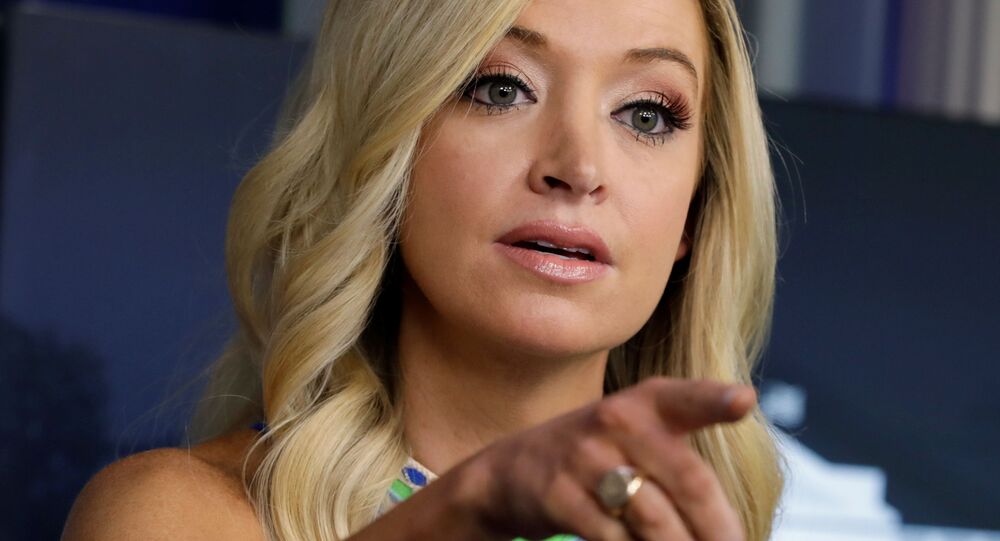 ‘This is Not America’: WH Press Secretary Raps Twitter for Biased Approach to Banning Articles

Earlier on Thursday, US President Donald Trump hailed the New York Post exposing what he described as "the massive corruption surrounding Sleepy Joe [Biden]" in an apparent reference to the Democratic presidential nominee.

In an interview with Fox News on Thursday, McEnany accused Twitter of only banning content that rides roughshod over Silicon Valley’s interests.

She also berated the social media giant for allowing the publication of articles that accused President Donald Trump of collaborating with Russia ahead of the 2016 presidential election despite the fact that the US special counsel’s probe revealed last year that there was no such collusion.

McEnany stressed that she had been permanently banned on Twitter, which “essentially” had her “at gun point” and said that unless she deleted a news story reported by the New York Post, she “cannot gain access” to her account.

“This is censorship, this is not the American way, this is not how a freedom-loving democracy operates. We have to hold Twitter accountable, and Facebook too, it was banning the transmission of the story simply because ideologically, it hurts the side of the aisle that Silicon Valley prefers. It's sad, it's censorship. This is not America”, she underlined.

Her remarks came as Trump posted earlier on Thursday a series of tweets in which he specifically threatened to scrap Section 230, a protection law that exempts companies like Twitter and Facebook from liability for content posted by users on these social media platforms.

POTUS also extended congratulations to the New York Post for “having exposed the massive corruption surrounding Sleepy Joe Biden” and the US, also claiming that the Democratic presidential nominee has “always been a corrupt politician”.

Additionally, the US president demanded that Biden should “immediately” release all of the information related to his involvement in family business dealings in light of recently published letters pointing to his possible links to the Ukrainian energy company Burisma.

This followed Twitter locking McEnany’s account after she shared a screenshot with the New York Post article and claiming that the screenshot had violated the social media giant’s rules “against distribution of hacked material”.

The developments came as both Facebook and Twitter took measures to limit the spread of the NY Post piece, with Facebook spokesperson Andrew Stone tweeting that they would be "reducing its distribution on our platform" while the tech giant's third-party fact-checkers verified whether the story was accurate.

The NY Post article refers to a couple of “smoking-gun” e-mails that Vadym Pozharskyi, a top official at Burisma, allegedly sent to Biden's son, Hunter, who used to work for the Ukrainian energy company Burisma under the Obama administration.

In one of the purported messages, Pozharskyi thanks Hunter for organising a meeting with his father, while in the second letter he asks Hunter how he could use his "influence" to support the Ukrainian company.

© AFP 2020 / MARIO TAMA
Hot Thursday Night: Trump, Biden to Partake in Rivalling Town Halls After Cancellation of 2nd Debate
The alleged e-mails apparently run counter to the Democratic candidate's claims that he has nothing to do with his younger son's work for Burisma.

In 2019, Trump’s attempts to get Kiev to reopen a 2015 probe into Hunter's business dealings in Ukraine finally resulted in POTUS being impeached for abuse of power and obstruction of Congress.

The president was accused of threatening to withhold hundreds of millions of dollars of US military aid to Ukraine if a probe into the Bidens’ alleged corrupt activities in the country was not restarted. Trump denied the accusations, and, although impeached in the House on 5 February, was later allowed by the Republican-controlled Senate to retain his office.