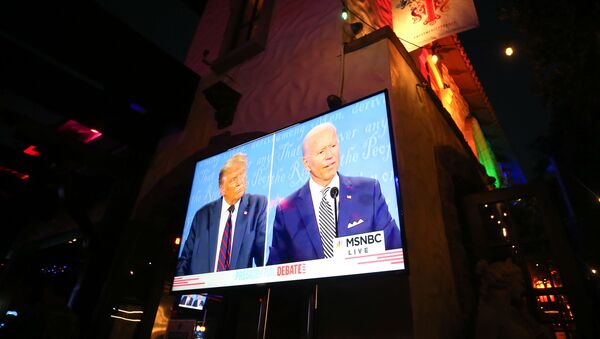 Oleg Burunov
All materialsWrite to the author
Last week, the US Commission on Presidential Debates confirmed that the second faceoff between President Donald Trump and his Democratic rival Joe Biden slated for 15 October had been cancelled. Earlier, POTUS said “no” to the commission’s move to hold a virtual debate due to health concerns.

NBC News has announced that President Donald Trump will participate in the network’s town hall on Thursday night, a 60-minute event that is due to be held at the Perez Art Museum in Miami.

NBC’s “Today” host Hoda Kotb said on Wednesday that the event “is set to take place outdoors and in accordance with the guidelines set forth by health officials, also consistent with all government regulations”.

National Institutes of Health Clinical Director Clifford Lane, for his part, told NBC News that they had used a PCR test analysis and concluded "with a high degree of confidence" that Trump is "not shedding infectious virus”.

This comes after Democratic presidential nominee Joe Biden signalled his intent to partake in an ABC News town hall in Philadelphia on Thursday, which will air at the same time as Trump’s event.

Joe Biden Tells 56% of Americans Who Say They Are Better Off Than Four Years Ago Not to Vote for Him
The developments were followed by the non-partisan Commission on Presidential Debates cancelling the second debate between Trump and Biden scheduled for 15 October, in a move that came after Trump opposed the commission’s decision to make the debate virtual for health and safety reasons.

The cancellation was announced a few days after Trump was discharged from the Walter Reed National Military Medical Centre, where he was earlier hospitalised to undergo treatment for the coronavirus.

On Monday, White House physician Sean Conley revealed that POTUS had tested negative for COVID-19 on "consecutive days" and is no longer "infectious", but did not specify, however, when the tests were conducted.

During the first presidential debate on 29 September, Trump and Biden constantly interrupted each other, making it hard for moderator Chris Wallace to follow the two-minute time limits set for each speaker. The two clashed on a number of pressing issues, such as the COVID-19 pandemic, healthcare, the November elections, and climate change.