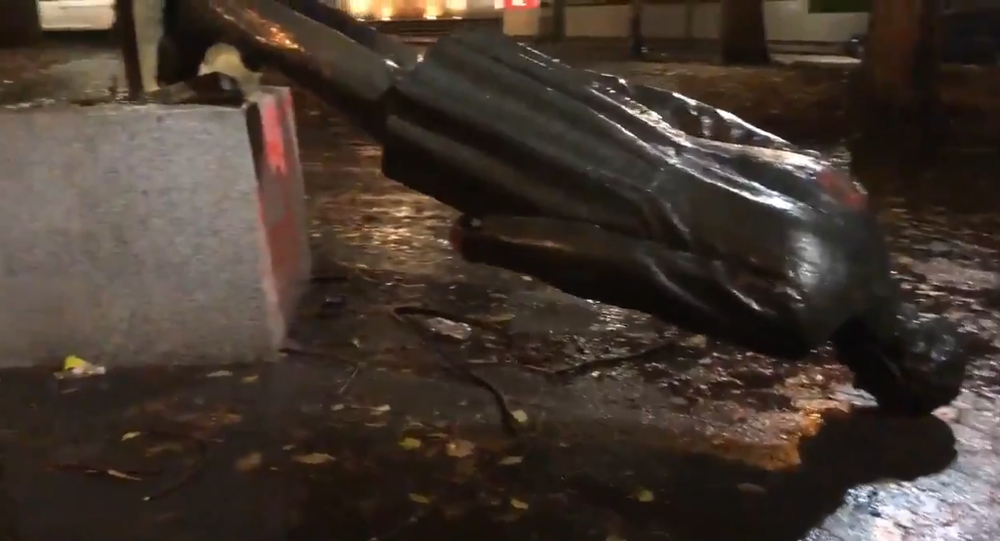 The Oregon city on the US West Coast has been rocked by months of unrest since police killed an unarmed African American man in Minneapolis on 25 May. The protests have been exacerbated by partisan bickering between Portland’s mayor and President Donald Trump, who sent federal law enforcement officers to the city to protect federal buildings.

Protesters in Portland have torn down statues of two US presidents in an "Indigenous Peoples Day of Rage" event Sunday night organised on the eve of Columbus Day, which marks the anniversary of Christopher Columbus’s arrival in the Americas on 12 October 1492.

The protesters’ targets included a statue of Abraham Lincoln, the US president best known for abolishing slavery, with rioters tearing the statue from its pedestal using chains, daubing the statue's hands with red paint to symbolise blood, and covering the pedestal with graffiti reading “Stolen Land” and “Dakota 38,” a reference to the number of Dakota Indians executed on Lincoln’s orders in 1862.

The Abraham Lincoln statue in Portland was toppled tonight by the “indigenous” faction of antifa who organized a “day of rage.” #PortlandRiots pic.twitter.com/HJ6ul7p4Hi

Nearby, protesters also tore down a statue of Teddy Roosevelt astride a horse, covering it with orange paint and spray-painting “Stolen Land” on the pedestal.

Protesters were also said to have broken the windows of the Oregon Historical Society during their rampage.

A riot was declared overnight in SW Portland, where statues of Presidents Abraham Lincoln and Theodore Roosevelt were torn down overnight by protesters on the eve of Columbus Day. Photos by @MontyOrrick #LiveOnK2 pic.twitter.com/7FFcObGqFt

President Donald Trump lashed out on Twitter after seeing footage and images of the defiled statues Monday morning, calling on Portland authorities to “put these animals in jail, now,” and blasting the “Radical Left fools” in charge of the city for not wanting “any help from real Law Enforcement which we will provide instantaneously.”

Put these animals in jail, now. The Radical Left only knows how to take advantage of very dumb “leadership” fools. This is Biden! Law & Order! https://t.co/w0yH3SqnrB

“These are Biden fools. ANTIFA RADICALS. Get them FBI, and get them now!” Trump added.

Although he has been widely praised in American school textbooks for ending slavery, Lincoln has been criticised by Native American historians for approving the military campaign to put down the Sioux Uprising in Minnesota in 1862. General John Pope, the commanding officer sent by Lincoln to restore order in the state, approved the destruction of Indian farms and food supplies, and carried out executions without trial of Native militiamen. “It is my purpose utterly to exterminate the Sioux if I have the power to do so. They are to be treated as maniacs or wild beasts,” Pope wrote during the operation. In December 1862, Lincoln personally signed off on the mass execution of 38 Dakota Indians by hanging for the crime of killing 490 white settlers during the uprising, with the rest of the tribesmen deported to other states, many dying before reaching their destination.

Roosevelt, widely praised for his efforts to break up monopolies, establishing US national parks, and for introducing the first federal food safety standards while expanding American power abroad, has similarly been criticised for his ruthless policy toward Native Americans, once declaring that the “reckless, revengeful [and] fiendishly cruel” Indian race should be driven to near-extinction. “I don’t go so far as to think that the only good Indians are the dead Indians, but I believe nine out of every 10 are. And I shouldn’t like to inquire too closely into the case of the tenth,” he once quipped in a speech in 1886.

Portland has been among the hardest-hit cities by Black Lives Matter protests after police killed an unarmed African American man in Minneapolis, Minnesota in May. The federal government and President Trump personally have repeatedly accused city and state authorities of failing to do enough to curb the protests or stop violence, harassment of local residents and destruction of property. Last month, the Justice Department designated Portland, New York City and Seattle as jurisdictions which “permit anarchy", allowing the federal government to withhold funding for those cities.

Portland police made sweeping arrests of protesters Saturday night in a bid to prevent an escalation and 26 were charged with interfering with a peace officer and disorderly conduct, one was also charged with carrying a concealed weapon.