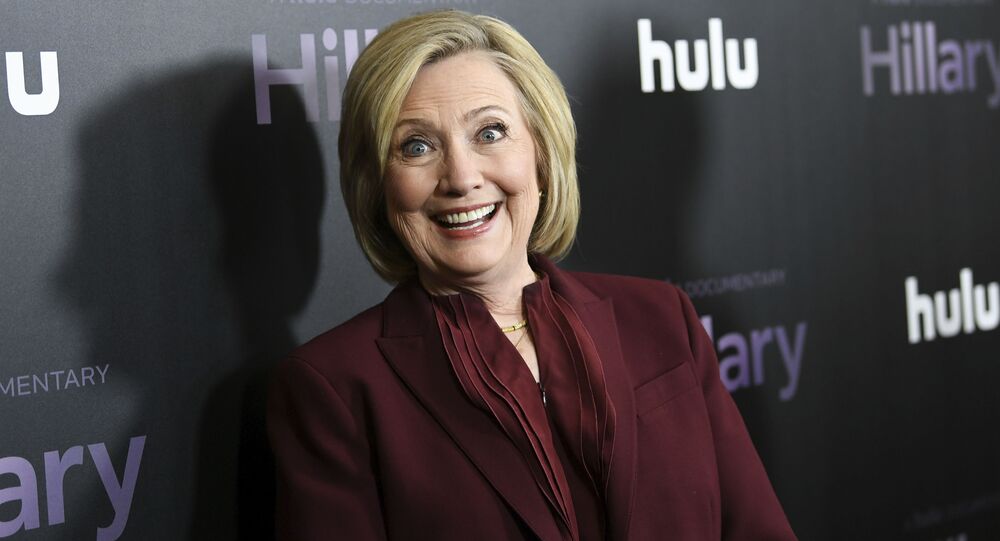 Hillary Clinton, who earlier endorsed Democratic presidential nominee Joe Biden ahead of the November elections in the US, intimated that America’s defence spending was veering down the “wrong path”, pointing the finger of blame at President Donald Trump’s alleged mismanagement, augmented by “right-wing ideological resistance”.

Hillary Clinton has offered her vision of how America ought to be gearing up to face new emerging threats on the global arena, slamming “exorbitant” Pentagon spending on “legacy weapons systems”.

In an essay published in Foreign Affairs magazine on 9 October, the former secretary of state urged Congress to review the defense spending budget, explaining that considering the array of current adversaries the country was facing, costly weapons systems dating back to the Cold War era and the  fight against terror were outdated.

Funding ought to be shifted towards “domestic renewal” and foreign diplomacy, with investments boosting “American innovation and bolstering strategically important industries and supply chains”, according to Clinton.

“Today's competition is not a traditional global military contest of force and firepower… Dusting off the Cold War playbook will do little to prepare the United States for adversaries that use new tools to fight in the gray zone between war and peace, exploit its open Internet and economy to undermine American democracy, and expose the vulnerability of many of its legacy weapons systems,” said the former secretary of state.

Clinton, who served as the 67th United States secretary of state from 2009 to 2013, emphatically called for slashing funding for some of the most expensive weapons systems, in favour of embracing “a broader approach”, pointing to emerging threats such as cyberattacks, deadly viruses able to generate pandemics, carbon emissions affecting the global climate, online propaganda, and “shifting supply chains”.

Hillary Clinton, who won the Democratic Party nomination in 2016 only to lose the presidential election to Donald Trump, laid out her arguments for cutting spending being channeled into such costly weapons systems as the Lockheed Martin F-35 Lightning II, which she dubbed a “poster child for this political reality”.

“Development of the plane ran way behind schedule and over budget, and it is estimated to cost $1 trillion over its lifespan, yet it is considered untouchable… The air force sank so much time and money into the project that turning back became unthinkable, especially since the F-35 is the only fifth-generation aircraft currently being manufactured in the United States,” writes Clinton.

The politician believes that these seemingly iconic weapons systems fall short of addressing the “asymmetric” capabilities developed by such adversaries facing the US as China.

“While the American military was fighting costly land wars in the Middle East, China was investing in relatively cheap anti-access/area-denial weapons, such as antiship ballistic missiles, which pose credible threats to the United States' expensive aircraft carriers… China's advances mean that the United States' air and sea superiority in the region is no longer ensured,” suggested Clinton.

Further expanding on the looming asymmetric threat to US interests, Clinton reminded of the country’s experience in wars fought on Afghan and Iraqi soil, and claimed that “the same was true in the skies and seas of East Asia”.

As for the funds released by slashing the defense spending, Clinton advocated they be used for diplomacy, research and innovation.

“Deep savings—potentially hundreds of billions of dollars over the next decade—can and should be found by retiring legacy weapons systems,” writes Clinton.

Ambitious projects to “retrofit” certain defence plants are touted by Clinton. As an example, she cites the Lima Army Tank Plant in Ohio. According to the politician, it could be revamped to produce “clean electric vehicles.”

​The First Lady of the United States from 1993 to 2001 argued that as land wars were now becoming a “thing of the past”, there was no need for so many heavy tanks.

“Instead of heavy tanks, the military should be investing in tools that will give troops an edge in the conflicts of the future, including upgraded communications and intelligence systems,” says Clinton.

Regarding the country’s nuclear arsenal, to which the US has allocated $1 trillion over the next 30 years, Clinton believed it should not only be slashed, but called for a “newer and fewer” approach.

“For starters, [America] should not be deploying low-yield nuclear warheads on submarines or nuclear-armed cruise missiles, which expand the range of scenarios for the use of nuclear weapons and increase the risk of a misunderstanding escalating quickly into a full-blown nuclear exchange,” writes Clinton.

Hillary Clinton, who lost the presidential election of 2016 to Republican opponent Donald Trump in the Electoral College despite winning a plurality of the popular vote, laid the blame for the current “wrong path” followed by US defense spending on “right-wing ideological resistance,” as well as alleged mismanagement by President Donald Trump.

Earlier, as Clinton described what had motivated her to write the piece for Foreign Affairs, she endorsed Democratic presidential nominee Joe Biden, while slamming his opponent Donald Trump.

“I spent a lot of time with my longtime collaborator and thought-partner-in-crime Dan Schwerin thinking about how Trump's failures as commander-in-chief have made America less safe, how some of these problems actually go back decades, and how a Biden administration could right the ship,” writes Clinton.

Referring to Trump’s perceived mishandling of the state of affairs in the country, she concluded that only a Biden triumph in the November election could be the “first step in digging out of the deep hole he's put America in”.