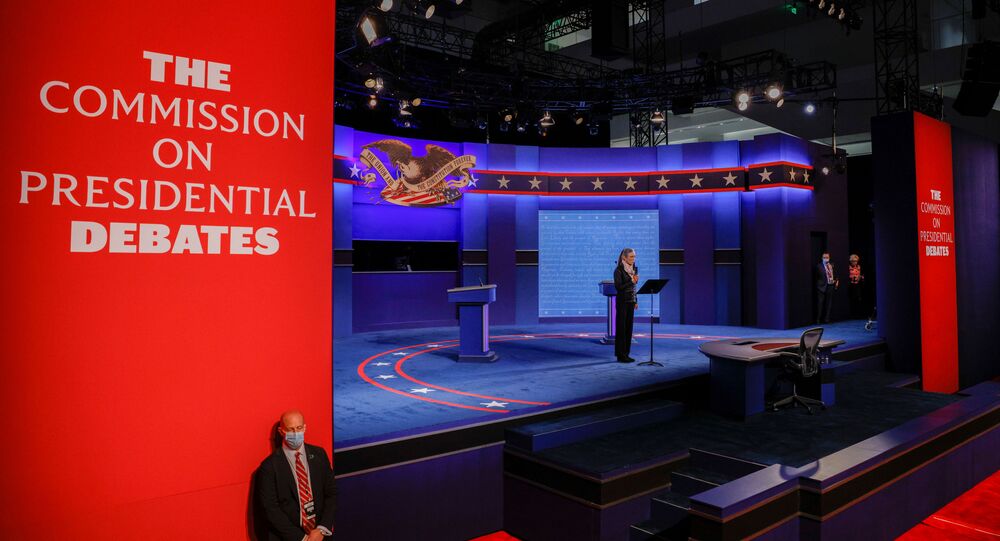 On 7 October, Vice President Mike Pence and Senator Kamala Harris of California, the running mate of Democratic presidential nominee Joe Biden, are going to cross swords at the University of Utah in Salt Lake City. US observers have discussed the upcoming event and placed their political bets.

The vice presidential debate will start at 9 pm EST on Wednesday and run for an hour and half, being moderated by Susan Page, the Washington Bureau chief of USA Today. The rivals will be separated by a plexiglass divider requested by the Biden campaign in the wake of a series of COVID-19 cases which struck President Donald Trump and his aides in the White House.

As a rule of thumb, vice presidential debates do not substantially affect the outcome of a presidential race, says Dr David Clementson, assistant professor at the Grady College of Journalism and Mass Communication at the University of Georgia.

"So while the vice presidential candidates can be intriguing and inspire speculation about their policy stances, personalities, families, etc., voters are voting for president not vice president", the academic highlights. "Moreover, research indicates that it is a relatively rare occurrence for a vice president to actually rise to the presidency".

However, this year the Pence-Harris contest has taken on a new significance since President Trump contracted COVID-19, and some concerns have been raised as to Biden's age, argues Anthony Robert Pahnke, professor of international relations at San Francisco State University. Additionally, although President Trump has signalled his willingness to get back out onto the campaign trail, at least one of the presidential debates may still be cancelled if he continues to test positive for COVID-19 into next week, the academic highlights.

The age of the two candidates also makes this debate important, says David Woodard, Clemson University political scientist and former GOP consultant: if Joe Biden, who will be 78 by January 2021, dies or is incapacitated in office, Harris might be president, and the same goes for Trump and Pence.

"Vice presidential debates are to show whether the candidate is prepared to become president if necessary", echoes Gary Nordlinger, a professor at the Graduate School of Political Management at George Washington University.

"However, given the intensity of last week’s presidential debate, it is hard to envision Vice President Mike Pence and Senator Kamala Harris appearing to be attack dogs by comparison, but rather appearing relatively sedate and calm in contrast", the professor alleges. "Last week Trump and Biden attacked each other relentlessly; for example, Biden called Trump a clown, fool, liar, and racist. I doubt Harris will go that route as well".

Likewise, the professor does not see Pence "as the proverbial attack dog" that other vice presidential contenders have been at times. However, he expects that Pence might have prepared "some zingers rhetorically aimed" at Harris.

© AP Photo / Alex Brandon
Vice President Mike Pence speaks at the Vehicle Assembly Building on Saturday, May 23, 2020, at NASA's Kennedy Space Center in Cape Canaveral, Fla. A rocket ship designed and built by SpaceX lifted off on Saturday with two Americans on a history-making flight to the International Space Station.

While it is difficult to forecast what tactics Trump and Biden's running mates will choose for the Wednesday contest, both have a fair amount of debate experience, Clementson admits.

Thus, for Pence it will be the second vice presidential faceoff. On 4 October 2016, former Indiana Governor Pence met with Senator Tim Kaine at Longwood University in Farmville, Virginia, and, according to the media, came out on top, being calm and measured in contrast to his opponent. Discussing his victory, media pundits cited the fact that the ex-governor used to work as a radio talk show host in the 1990s, presuming that this experience came in handy for him.

What also plays into Pence's hands is that over the past four years, the vice president has proven to be a strong and consistent conservative, believes Dr Nicholas Waddy, associate professor of history at SUNY Alfred: "Pence has been a steady, reassuring voice in the Trump administration, upholding conservative principles like law and order, peace through strength, respecting individual and states' rights, and upholding the right to life".

Nevertheless, the Trump-Pence ticket is still trailing the Biden-Harris' one in national surveys. Based only on an analysis of the polls, one would have to regard Kamala Harris's chances of winning as high, and Mike Pence's chances as low, Waddy notes, outlining potential obstacles in the senator's path to victory.

While Pence is well-known to the public due to his deeds, Kamala Harris is and always has been defined by her ambition and shifting positions, according to him. Thus, the senator used to criticise Joe Biden during the Democratic primaries strongly implying that he was racist. Furthermore, she said that she "believed" women who complained about the ex-vice president's alleged inappropriate touching.

"Now that she can advance her career and get on the fast track to become president herself, those doubts are forgotten, and she is 'proud' to serve with a racist and a serial abuser of women", Waddy underlines.

In addition to this, Harris proved to be "a shameless partisan, who twists the law and the Constitution to advance the Democratic Party and the progressive cause", according to Waddy, who refers to her "withering and baseless attacks" during the congressional hearings on the candidacy of Justice Brett Kavanaugh in 2018.

"She is, in short, consistently inconsistent, and thoroughly opportunistic", he sums up.

There is yet another reason why "Harris will have the toughest job of all" during the Wednesday debate, adds Anthony Angelini, a GOP political consultant:

"She needs to convince the country that she's ready to take over for Biden if he, for some unfortunate reason, is unable to serve", he says. "Harris was unable to prove her worthiness to be president in the primaries. She was even unpopular in her own state. So this will be an uphill battle for her".

What Susan Page 'Shouldn't Do' During the Debate

Another thing to watch for may be how the moderator runs the event, highlights David Clementson, referring to Susan Page who will host the event.

"Last week’s presidential debate moderator Chris Wallace earned his fair share of criticism for the rambunctious scene", the professor observes. "He routinely interrupted both Trump and Biden mere seconds into their one- or two-minute answer allotments and contributed to 35 instances of cross-talk and posed multi-pronged antagonistic ‘gotcha’ questions based on cherry-picked quotations from Trump and Biden".

The moderator's questions may also be the subject of concern, according to the academic, who draws attention to the fact that "both Biden and Trump accused Wallace of posing lines of questioning that were prefaced with inaccuracies".

He suggests that it was Wallace who "probably set a tone for the candidates to repeatedly attack each other's veracity and frequently accuse each other of being liars".

"For the sake of the vice presidential debate appearing less contentious and more fitting for the prestigious office that the candidates are seeking, hopefully Susan Page will not interrupt the candidates, will encourage the candidates to elaborate on their stances rather than inserting herself into the debate constantly, will pose questions that permit free-flowing intelligent debate, and won’t inspire the candidates to call each other liars incessantly", Clementson concludes.

Pence, Harris Reportedly to Be Separated by Plexiglass Barrier During Debate